TOKYO -- Sony said Wednesday it will roll out a new robot dog on Jan. 11, 2018, the year of the dog, that will be packed with the latest robotic technologies, including sensors to help it recognize its environment, and artificial intelligence to help it "think," plus the mechanics to act on its thoughts.

Sony said the new robot will be able to respond to human calls and will be a loving companion to families. The robot will grow more intelligent over time by collecting, learning from and storing information from its owners. It will have a price tag of 198,000 yen ($1,740) plus tax. Sony has not disclosed a sales target.

For another 2,980 yen, masters can give their pet an aibone, a bone-shaped toy accessory.

"Our mission is to impress people and stimulate their curiosity," Sony President and CEO Kazuo Hirai told a news conference in Tokyo.

The robot will emote with body language, perking its ears, making eyes, wagging its tail. The eyes have two layers of OLEDs that Sony says allow for nuanced expressions.

It recognizes its owners voices and feeds off interactions with family members. 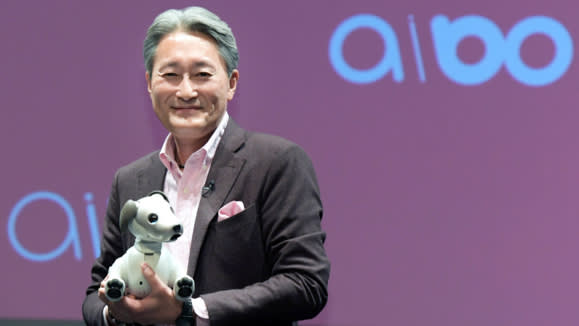 And maybe to have some fun. In Japan, the onomatopoeia for the sound dogs make is not bow-wow, but wan wan, which sounds much like the release date -- one-one-one. Shoppers can begin placing orders at 11.01 p.m. on Nov.1.

The robot dog will be named named aibo, similar to the name of Sony's original robot dog introduced in 1999, called Aibo. It sold for 250,000 yen back then.

Sony unveiled its plan for a new pet companion robot in October, and is considering how it may be used in collaboration with other services and businesses.

Sony earlier exited the pet robot business in 2006 as part of a company reorganization. It appears to have decided to get back into the business to take advantage of the latest advances in artificial intelligence and telecommunications.