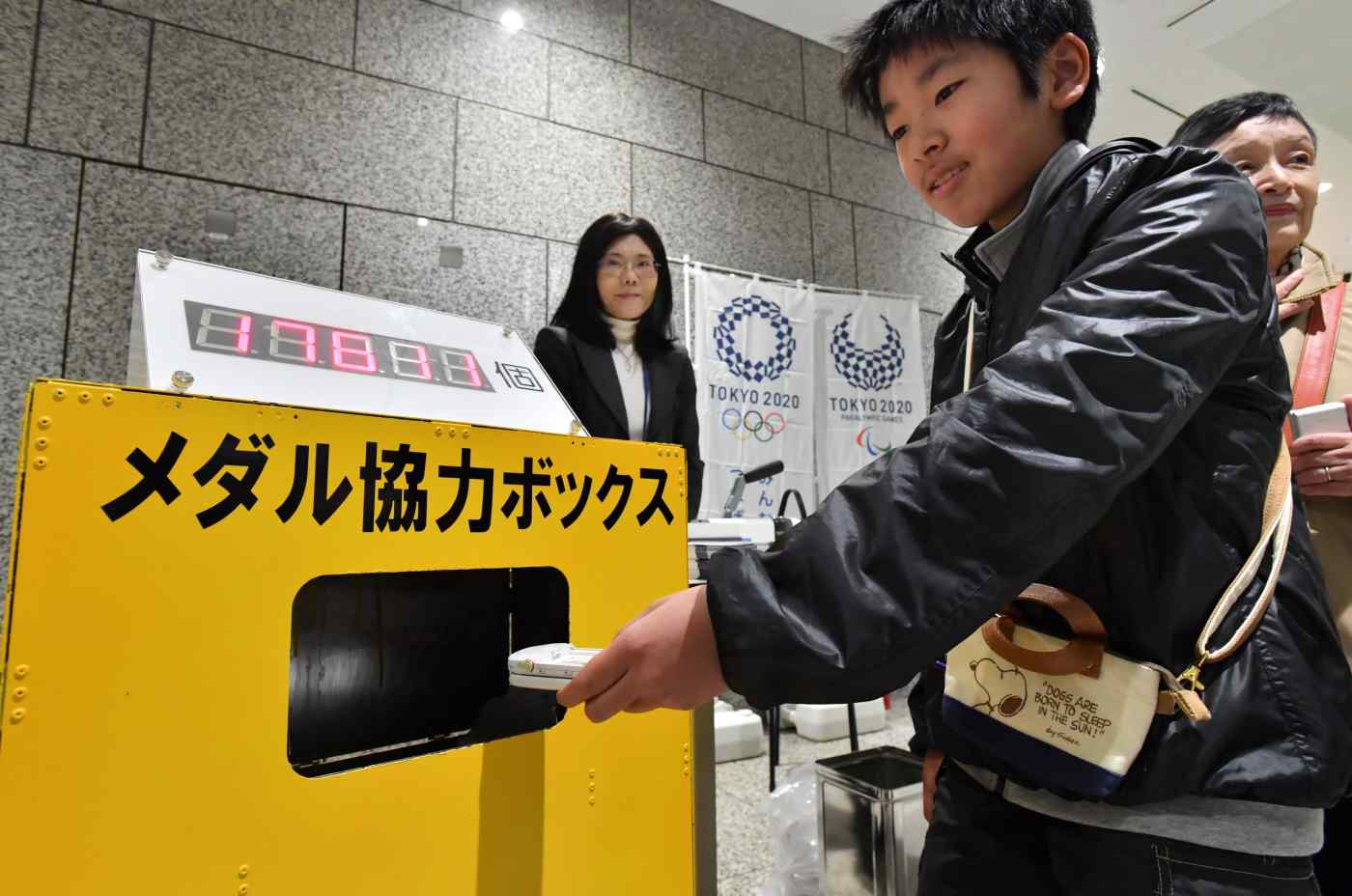 TOKYO -- The Tokyo Organizing Committee of the Olympic and Paralympic Games has begun collecting old mobile phones and other small devices to create medals for the 2020 spectacle.

Japan has long harbored hope for urban mining -- the extraction of rare and precious metals from discarded electronics. Now the resource-poor country has a globally recognized brand -- the Olympics -- to help give impetus to the movement. 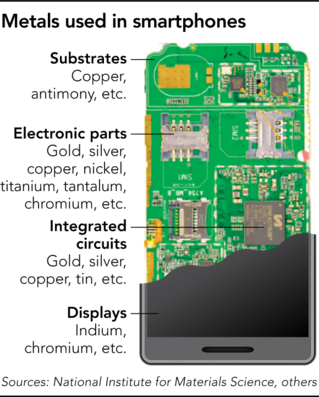 The committee, along with the Tokyo metropolitan government, which had already begun collecting discarded gadgets for the project, hopes to make about 5,000 medals out of recycled gold, silver and bronze for the 2020 Olympics and Paralympics.

The committee is shooting for spring 2019 to gather about 8 tons of gold, silver and bronze. This is about four times more than what will eventually end up in the medals; it also takes into account the loss of metal during the processing stage.

Komei Harada, an executive research adviser at the National Institute for Materials Science, or NIMS, is a proponent of urban mining. He said he hopes the Olympics creates more awareness of the sector's potential.

NIMS on April 23 unveiled medals made with gold and other metals recycled from mobile phones and other electronic devices.

The country also had the second most urban copper deposits, at 38 million tons, about 8% of global reserves.

The potential gold and silver deposits are equivalent to about three years' worth of global demand.

How close to reality these estimates are depends on several factors -- including actually doing the work of collecting discarded gadgets and extracting metals from them. Market value also plays a role.

But the numbers paint a picture of a resource-rich Japan. 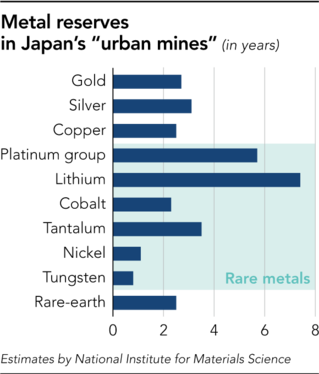 Japan is also sitting on vast urban deposits of rare earths. According to NIMS, Japan had enough recyclable lithium to feed global demand for seven years. Lithium is a rare metal essential for today's rechargeable batteries and other products.

Meanwhile, Japan's urban deposits of rare earths like neodymium, which is used in magnets, are estimated to be equivalent to two and a half years' worth of global demand.

One benefit of urban mining is that mobile phones and other electronic devices are purer sources of metals than natural ores. Metals make up 10% of the weight of gadgets. Most of these are precious metals like copper. Rare earths make up only 1% or so of a device's weight, but even this is higher than what would be found in a natural ore, Harada said.

Let's consider gold, which makes up 0.03% of our electronic gadgets. This doesn't sound like much, and it's not, but a ton of natural ore yields only 3 to 5 grams of gold. In percentage terms, that's 0.0003%.

As you might have guessed, a lot of the ores that get mined end up going back into the earth as waste. Some of this is toxic and some of it is radioactive.

Making use of urban deposits is expected to reduce mining industry's adverse impact on the environment.

Toru Okabe, a professor at the University of Tokyo who is familiar with metal recycling, said that although extracting metals from electronics costs more than working with ore, it is important to do urban mining for the environment's sake.

Still, for the profit-driven private sector, new technologies are needed to lower the costs of urban mining. Right now, only a few precious metals, such as gold, can make money when taken out of mobiles and home appliances.

Perhaps the 2020 Olympics will put urban mining and its potential in the global spotlight, leading all of us, consumers and industries alike, to become better recyclers.

At least, that is what Harada is hoping for.