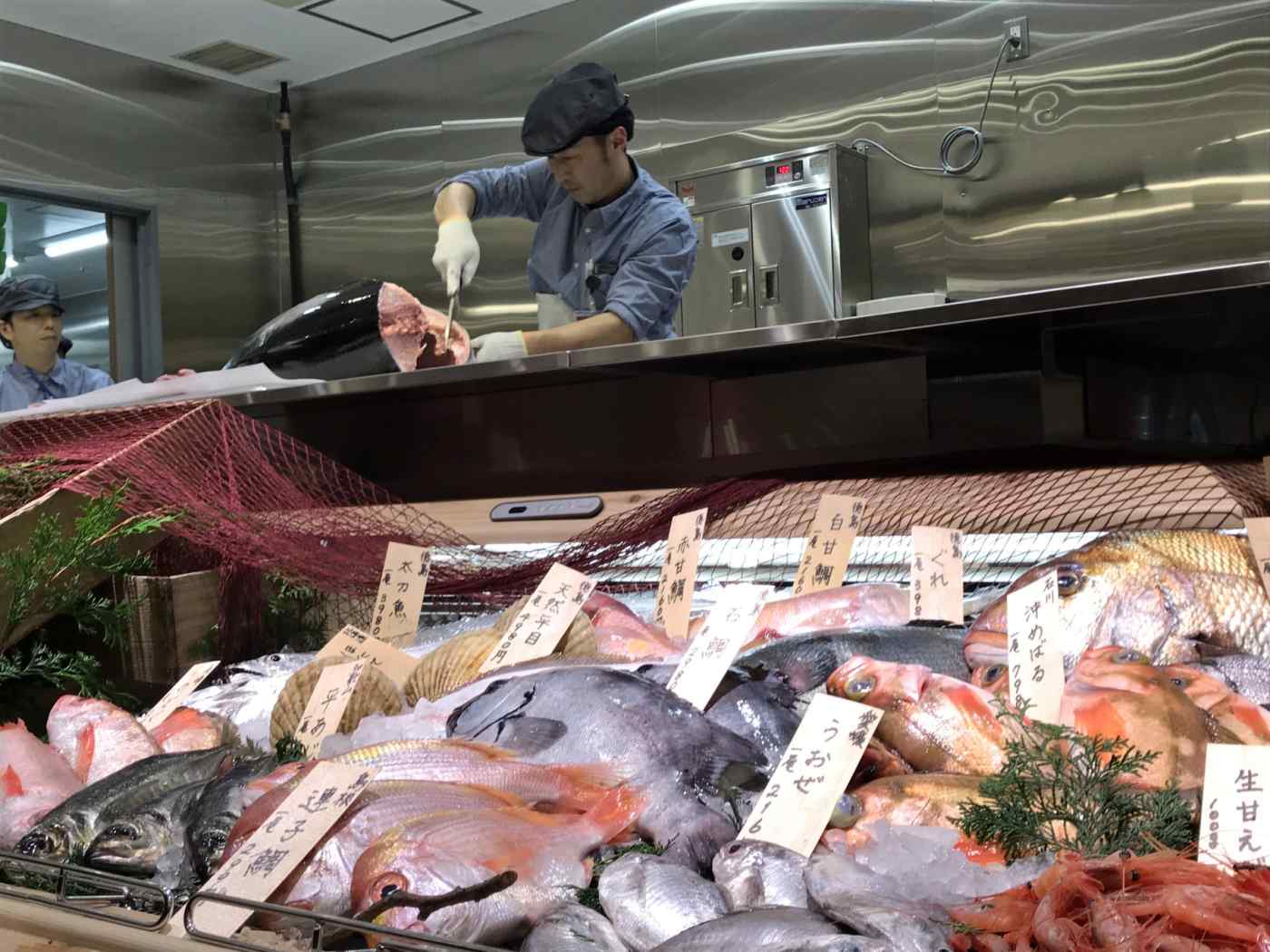 Fresh fish at Muji's new store will be sent directly from where they were caught.
KOSUKE TSUNODA, Nikkei staff writerMarch 20, 2018 02:47 JST | Japan
CopyCopied

TOKYO -- The world's largest Muji store, slated to open in Osaka on Tuesday, will prominently feature pricey seafood, such as freshly caught sea bream and Japanese spiny lobster, part of a strategy aimed at promoting a high-quality image.

The store in the city of Sakai will boast a floor space five times the average Muji store, with impressively high ceilings. Ryohin Keikaku hopes such features, along with the food corner offering fish costing more than 5,000 yen ($47), will help it shake off its low-price reputation in the home market.

"I would like to introduce seasonal recipes and other cooking as well," said a floor manager.

In the neighboring meat section, Japanese Black cattle beef from Miyazaki Prefecture priced at more than 1,000 yen per 100 grams was on display, as was Agu pork from Okinawa.

There will also be a food court featuring items like handmade yogurt. The counters will stand out in appearance, far from the plain image of the general goods section.

"We will also expand our selection of local food products. We want to become a part of the community," said Masaaki Kanai, chairman of Ryohin Keikaku.

The newly renovated store will have 11 times more floor space than before at about 4,300 sq. meters, with about half of that dedicated to food products. Other locations, such as Muji's flagship store in Tokyo's Yurakucho district, handle vegetables, but the company has never focused so heavily on food before.

One reason for devoting more space to food is to entice customers to visit more often. Shopping for stationery and clothing is limited to once or twice a month, but consumers could visit every few days for food products and then buy other goods while there. Supermarkets and drugstores are bolstering food-related offerings as well for the same reason.

But Muji also has a larger aim in mind. Using its safety-conscious reputation, the retailer plans to market its products on quality and price them slightly higher. Although Muji is known in Japan for inexpensive goods, it sees an opportunity to attract consumers seeking high-grade products with food.

This strategy was inspired by Muji's success in China, which apparently helped drive Ryohin Keikaku to its fifth straight record operating profit for the year ended February. Chinese buy products from Muji at higher prices because they view it as a good brand. The company's operating margin in East Asia, mainly China, is 16% compared with just 10% for Japan, due to its strong brand power in the region. A Muji-brand hotel also opened in China this January.

"Muji's ideas, including its commitment to manufacturing, have gained traction in China," said Takahiro Kazahaya of Deutsche Securities. "That is an important weapon in the battle against online retailers, where price competition is intense."

Muji's new course is not without obstacles. Other retailers are strengthening food operations, too, and internet companies are building home delivery services for groceries. Increasing the space devoted to food also comes with new challenges such as ensuring freshness and stable supply chains. Should trouble occur, it could hurt Muji's image for safety and quality.