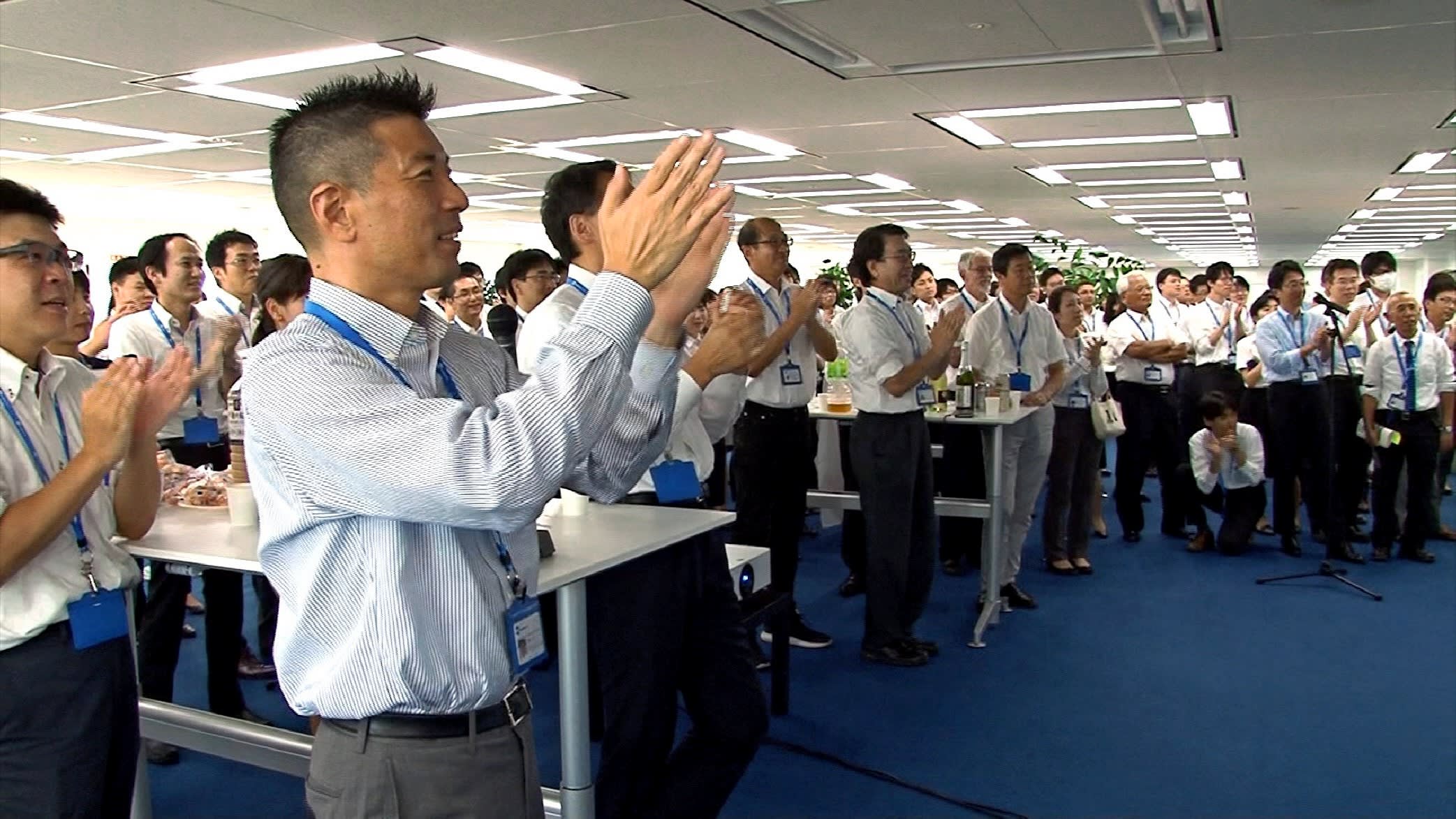 TOKYO -- The world's largest provider of ocean weather data, Weathernews, successfully launched its own microsatellite on July 14, making it the first weather company to have its own satellite.

It was the company's second try at putting a satellite into orbit after a failed attempt in 2013. 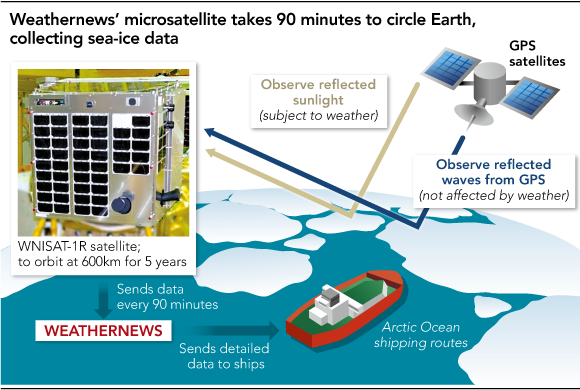 Weathernews transmits information and analysis to roughly 6,000 ships a year, including sea ice information for vessels plying Arctic routes. Its clients include Maersk Group of Denmark and other major shipping companies.

Should the mission ultimately prove successful, the Japanese company will be well-positioned to boost revenue from other applications of its data.

Some 200 employees of the company cheered in front of a screen at company headquarters in Chiba Prefecture near Tokyo as the Soyuz rocket carrying the WNISAT-1R satellite lifted off from Baikonur Cosmodrome in Kazakhstan. It is too early to deem the mission a success, considering that the company's first launch of a satellite four years ago had a similarly auspicious beginning. After a few months, however, it stopped transmitting data. Still, President Chihito Kusabiraki emphasized at the time the importance of satellites to the company's growth, hence the second attempt.

Weathernews developed the new microsatellite jointly with Axelspace, a university-led startup based in Tokyo that also helped with the first satellite. The roughly 50cm cube-shaped satellite weighs just 43kg and is expected to orbit at an altitude of 600km for five years, collecting ocean and atmospheric data.

About half the company contract's involve ship routing services -- route recommendations that allow vessels to meet fuel efficiency targets while running at optimal speeds. The recommendations are based on ocean risk projections. For example, Weathernews might suggest a route that avoids rough seas for a ship carrying new cars, which could be damaged by ship motion in a heavy storm.

Weathernews currently relies on data obtained from meteorological organizations around the world as well as its own measuring devices installed at coastal locations and on ships. If the microsatellite mission is succesful, the company will be able to improve the accuracy of its information.

Currently, there are no private weather service providers with their own satellites. Weathernews believes that in order to meet customer needs, it must have its own satellite rather than share the same data sources as its competitors. Weathernews receives signals from the microsatellite at its Chiba Prefecture headquarters.

The biggest task of the new satellite will be to increase the accuracy of navigation assistance for ships using Arctic routes during summer. This service will be valuable for shipping companies, which account for roughly 30% of the company's annual 14 billion yen ($127 million) or so in sales.

Mitsui O.S.K. Lines is one shipper interested in the satellite services. It plans to use Arctic routes connecting Russia, Europe and East Asia for shipping liquefied natural gas. Icebreakers typically assist vessels along these routes, but the shipper thinks that Weathernews' precise sea ice information will increase safety, especially when a ship encounters particularly thick ice.

Key to Weathernews' new service will be Global Navigation Satellite Systems Reflectometry, or GNSS-R. Global positioning satellites operated by the U.S. regularly transmit GPS signals to earth. The WNISAT-1R satellite will observe GPS signals reflected from the earth's surface to determine distribution of sea ice, among other surface features. The company has so far been relying on satellite images for its sea ice projections, which are sometimes difficult to produce since the quality of satellite imagery is affected by weather. Because of this, Weathernews can only provide information several times a week.

GPS signals, however, can reach sea ice any time regardless of the weather. The WNISAT-1R satellite will receive and transmit GPS data at 90-minute intervals. After analyzing the data, Weathernews will send updated information to its shipping clients.

As global warming melts Arctic ice, shipping companies are showing interest in routes that were once unnavigable. And with gas field development in Northeastern Russia progressing at a rapid pace, demand for shipping services in the region is rising.

In 2016, Weathernews supported 90 round trips over Arctic routes. The number increased sevenfold in just one year. Business prospects are so good that the company aims "to double the number in three years," noted Kusabiraki.

The new satellite will also help aircraft operators. Six cameras on-board fitted at different angles can take stereoscopic images of the earth, providing precise information concerning the height of typhoons, clouds or smoke from a volcano. Weathernews currently provides the same data based on photos from cameras on the ground.

Accurate readings of cloud heights would let pilots decide whether to fly above clouds or detour around them. Knowing the height of a volcanic plume would help predict the areas affected by ash, thereby minimizing flight cancellations due to volcanic activity.

Weathernews is looking into other kinds of sea and air applications as well. "We are keen to launch more satellites in the future," Kusabiraki insists.

The motivation for space-based observation of sea ice came in 2003 after an inquiry from a client about Arctic routes. A captain from Taiwanese shipping company Evergreen Marine asked Weathernews' founder Hiroyoshi Ishibashi, now-deceased, if he had any ideas about how to navigate through the Arctic. According to Kusabiraki, it was around the time that people in the shipping industry were talking about melting Arctic ice opening new shipping routes.

"We had never thought of sending a satellite into space," Kusabiraki recalls. At that time launching a satellite would have cost at least 10 billion yen. But Masaya Yamamoto, chief technology officer of Weathernews and the holder of a PhD in engineering, suggested it could be possible with only several hundreds of millions of yen if the team had a clear vision and stuck to its goal. "Without that innovative idea, we would not be where we are today," said Kusabiraki.

At the time, space-oriented startups were just beginning to gain traction, among them Blue Origin from Amazon.com founder Jeff Bezos and SpaceX from Tesla's Elon Musk. Their shared vision was to bring costs down to earth.

A short time later, in 2013, Weathernews launched its first satellite with help from Axelspace. In 2015, Weathernews offered to invest in the satellite startup.

The current WNISAT-1R cost about 300 million yen to launch.

Weathernews wants to explore the potential of satellites in other fields. One possible area is the monitoring of ocean currents by calculating the speed at which the surface of the sea moves, according to Yamamoto. For ships running short routes, knowing ocean currents is more useful than knowing weather conditions.

At present, Weathernews does not provide services for short-route shipping, but having reliable ocean current data would give it entry into this field, possibly doubling its current client base to 20,000 ships worldwide.

"We've just started," Kusabiraki says of his satellite business. But the chief's hopes are apparently much higher than he sounded.