TOKYO -- Japanese electronics retailer Yamada Denki's group pretax profit probably declined 11% on the year to about 48 billion yen ($431 million) for the nine months ended Dec. 31, the first drop for the period since 2013.

The soft yen a year earlier generated more than 3 billion yen in exchange gains from overseas operations. The loss of this effect in 2017 also contributed to the profit decline.

Sales appear to have risen 2% to around 1.18 trillion yen. Purchases of pricey organic light-emitting diode televisions grew during the year-end sales season, while smart speakers from such companies as Google gained popularity. Replacement demand for heating and air-conditioning units was also brisk amid a period of cold weather.

Pretax losses shrank for the homebuilding and renovation business, which the company is molding into its second-largest source of earnings. The business required upfront investment, for installing and renovating model homes at Yamada store sites, for instance. But its sales grew for the nine-month period as handovers of finished homes increased.

With growth prospects weak in the consumer electronics business, Yamada has been shrinking floor space dedicated to such products and instead expanding the home renovation and furniture sections. This is expected to further lift the company's housing-related sales. 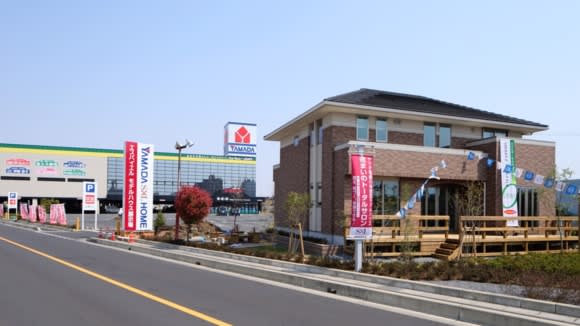 This Yamada Denki store in Kasukabe, Saitama Prefecture, north of Tokyo, has a model home in its parking lot.

The gross profit margin likely declined 1 percentage point to around 29% as older home appliances, daily goods and other products were sold at a discount to clear inventories. More than 10 stores were revamped during the nine-month period, driving up costs. With selling and administrative expenses also climbing, Yamada's operating profit for the April-December period also likely declined from a year earlier.

Earnings will probably improve in the January-March quarter. Not only was inventory nearly cleared out by December, but the housing and renovation business also likely turned a pretax profit in the October-December quarter. More finished homes are expected to be handed over to customers, further improving earnings prospects. Revamped stores are seen making a contribution as well.

For the full year ending March 31, Yamada's standing projection has sales growing 2% to 1.6 trillion yen and pretax profit rising 26% to 83.3 billion yen. The company will likely maintain the forecast when announcing April-December earnings on Feb. 1.