That's a wrap! What made the business headlines in 2017 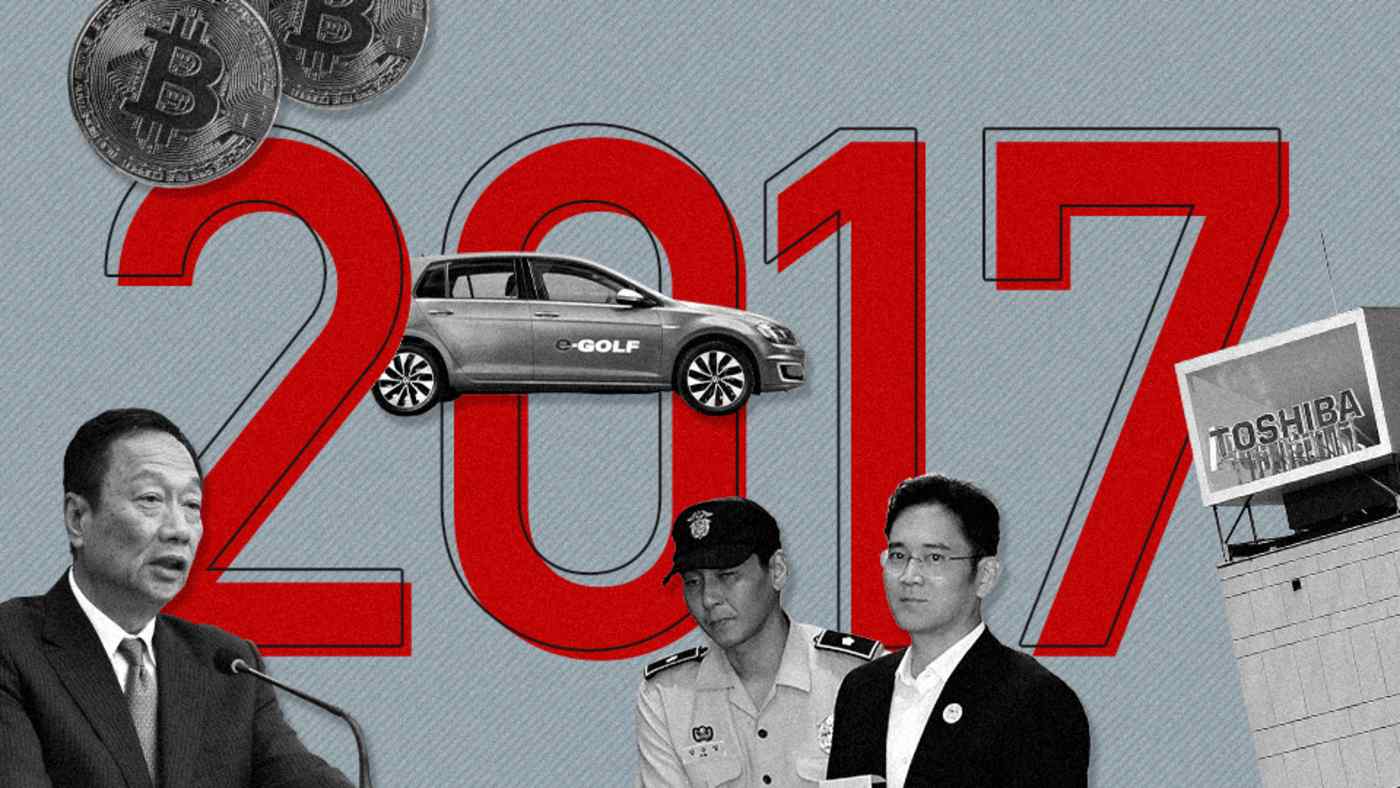 TOKYO -- Asian businesses took center stage this year as new digital technologies such as mobile payments and environmental commitments in areas including electric vehicles changed how people live, triggering new industry alliances and gathering investments from around the world.

Yet some big corporations struggled, with scandals occurring at well-known conglomerates.

The Nikkei Asian Review selected the business news and trends that dominated 2017 and suggest where the region will go next year and beyond. Another digital-driven change in 2017 involved the spread of cryptocurrencies. China's yuan was the currency most linked to bitcoin trading earlier this year, but now about 40% of bitcoin is exchanged with the Japanese yen.

Bitcoin's price climbed from around $1,000 at the beginning of 2017 to nearly $20,000 in December. But authorities and central banks in Asia started warning against the bitcoin frenzy. The Monetary Authority of Singapore noted in December that it "advises the public to act with extreme caution and understand the significant risks they take on if they choose to invest in cryptocurrencies."

China, the world's largest car market, made a big impact on the industry worldwide in September when the government announced sales volume quotas for automakers regarding new-energy vehicles. The country also is mulling a ban on production and sales of gasoline and diesel cars, driving the global shift toward electric vehicles.

Shares of top Chinese green-car manufacturer BYD soared in September on expectations that the company stands to benefit from the government's promotion of eco-friendly vehicles. In line with China's electric vehicle shift, automakers such as Volkswagen said they will produce more such cars. Japan's Toyota Motor and Mazda Motor in September announced the establishment of a joint venture to develop technology for electric vehicles.

U.S. President Donald Trump, inaugurated in January, pursued job creation in America. Hon Hai Precision Industry responded quickly, as the Taiwanese company known as Foxconn said it would spend $10 billion to build a liquid crystal display plant in the state of Wisconsin. SoftBank's Masayoshi Son said his group would invest $50 billion in the U.S., while the Toyota-Mazda alliance announced it would construct a $1.6 billion plant in America.

The restructuring of state-owned enterprises has become a priority for Southeast Asia's emerging nations. In December, an affiliate of Thai Beverage, known for Chang Beer, won the right to buy a nearly 54% stake in Vietnam's Saigon Beer Alcohol Beverage Corp., or Sabeco, for about $4.8 billion, in what is to be the Vietnamese government's largest-ever divestment of an SOE.

Indonesia also began restructuring SOEs, focusing on the mining industry with hopes of adding value to the nation's core industry. Indonesia Asahan Aluminium, a state-owned aluminum refiner known as Inalum, was transformed into a holding company that controls nonferrous-metal producer Aneka Tambang, coal company Bukit Asam and tin miner Timah. The move is designed to create a national mining champion that can compete with global giants like Rio Tinto and BHP Billiton. Inalum received a 9.36% share of Freeport Indonesia, a local subsidiary of U.S. miner Freeport-McMoRan, from the government.

Japanese electronics conglomerate Toshiba logged a net loss of 965 billion yen ($8.52 billion at current rates) for the fiscal year ended in March, due to a massive loss at its U.S. nuclear subsidiary Westinghouse Electric. Toshiba's shareholders' equity fell below zero, forcing the conglomerate to divest profitable businesses including its memory chip unit.

Toshiba finally agreed to sell the unit to a consortium led by Bain Capital of the U.S. for 2 trillion yen ($17.6 billion). But the company's future after it releases the profitable unit remains unclear. Toshiba also agreed to sell its television unit to China's Hisense Group in November.

The number of scandal-hit Japanese producers grew one after another in 2017, triggered by Kobe Steel, which sold falsely certified steel, aluminum and copper products to over 500 customers including Boeing and Toyota. At Nissan Motor and Subaru, unauthorized staff had inspected their products for many years. Toray Industries and Mitsubishi Materials said their group companies had falsified quality-related data. All of these scandals have risked the credibility of the country's manufacturing sector. Another big scandal slammed South Korea. Samsung Electronics Vice Chairman Lee Jae-yong was indicted, accused of paying bribes to a friend of then-President Park Geun-hye to win her support for the merger of two Samsung affiliates. At the first trial, he was sentenced to five years in prison. Lee has filed an appeal against the five-year jail term. Samsung in October announced a reshuffle of board members, promoting those who are close to Lee.

Morris Chang, chairman of Taiwan Semiconductor Manufacturing, announced in October that he will retire in June 2018. The 86-year-old leader said he wanted to reserve his remaining years for himself and his family. Chang named chief operating officers Mark Liu and C.C. Wei as his successors, and they will operate as a dual-leadership team for the world's largest contract chipmaker by revenue and Taiwan's most valued company.

But succession can be difficult, as Indian conglomerate Reliance demonstrated. The sons of founder Dhirubhai Ambani have fought since his death in 2002. Mobile telecom company Reliance Communications, operated by younger brother Anil, suffered a loss as elder brother Mukesh's Reliance Jio Infocomm spread with low-price services. The brothers have long divided business areas to avoid overlap, but Mukesh launched Reliance Jio in 2016, triggering the battle between the two. On Dec. 28, Mukesh's Reliance Jio announced that it will buy the wireless and telecom assets of Anil's Reliance Communications.

Another internal battle occurred at Infosys, India's second-largest software services company. Vishal Sikka, who became CEO in 2014, left the company this year as his relationship with co-founder Narayana Murthy collapsed. After his resignation, former chairman Nandan Nilekani returned to Infosys and managed the board. In December, the company finally found its new CEO from a French IT business. Malaysia Airlines has struggled to rebound after experiencing twin disasters in 2014: Flight 370 disappeared en route and Flight 17 was shot down over Ukraine. This year, CEO Peter Bellew who assumed the post in July 2016, suddenly resigned in October, a surprise that could delay the airline's recovery from malaise.