A wake-up call to Asia, tackle your own 'Asian hate' A migrant worker from Myanmar is seen at a construction site in Bangkok after the Thai government eased some protective measures following a COVID-19 outbreak in June 2020.   © Reuters
YUKAKO ONOMay 26, 2021 11:07 JST | Thailand
CopyCopied

For expatriates like me, an unexpected upside to life in Bangkok during the COVID-19 outbreak is that it has become significantly easier to hail a taxi. Before the pandemic, drivers would often ignore me or try to rip me off, thinking I was among the millions of foreign tourists who used to visit the Thai capital every year. With no tourists in sight, those stressful days seemed to be over.

That changed one recent afternoon when I caught a taxi in my neighborhood. I was wearing a face mask and the driver turned on the meter. Everything seemed fine. But as soon as I used my clumsy Thai to ask for my destination, the driver made a face and said "Khon Yiipun (Japanese people) ... COVID, COVID!"

This happened as a new wave of COVID-19 infections was hitting Thailand, with record numbers of cases. Many were traced to nightlife venues in Sukhumvit, a Bangkok area popular with Japanese expats. Although patrons of the night clubs and bars there are mainly Thais, and although I was not asking to go to that district, the driver was associating Japanese people with the outbreak. Several other Japanese friends have had similar taxi experiences.

It reminded me of the wave of anti-Asian hate in the U.S. Hate crimes against Asian Americans and Asian immigrants have been driven largely by the perception that Asians are responsible for the coronavirus pandemic because of its origin in Wuhan, China. Former U.S. President Donald Trump repeatedly referred to COVID-19 as the "Chinese virus" or "kung flu."

Discrimination against Asians in the West is nothing new. I was brought up in the U.K., and experienced verbal harassment there about my appearance. But after living in Thailand, I've come to understand that stereotyping and discrimination are embedded within Asian societies too. 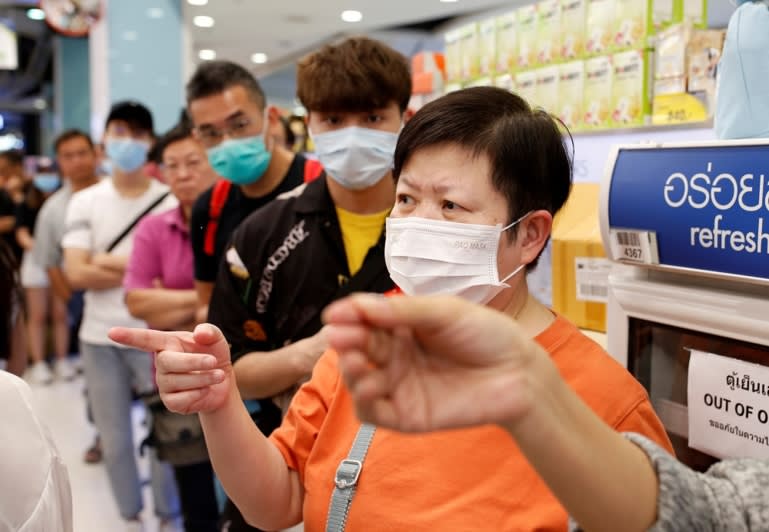 Chinese tourists line up to buy masks at a shopping mall in Bangkok in January 2020.   © Reuters

Thai prejudices against immigrants from Myanmar emerged clearly when a second wave of the coronavirus emerged in December after discovery of a cluster of cases in Samut Sakhon, a coastal province that has been dubbed "Little Myanmar" for its large population of migrant workers from Myanmar. Many live in poor conditions, sharing dormitories with little social distancing, and the virus spread rapidly.

The Thai government was quick to blame the workers, claiming that undocumented migrants had imported the virus by entering the country illegally without quarantining. Prime Minister Prayuth Chan-ocha said that illegal migrants had "brought much grief to the country."

Hate speech flooded social media, while buses, banks and hospitals in some areas refused to serve people who looked Burmese. When news spread that refugees were trying to flee into Thailand because of Myanmar's military coup, I was shocked to hear one of my Thai friends say: "Ugh, they are going to bring in viruses again."

"The government needed someone to blame and Myanmar migrants were easy scapegoats," says Bhanubhatra Kaan Jittiang, a lecturer in the political science department of Bangkok's Chulalongkorn University. Despite the migrant workers' contribution to the Thai economy, "Thai people have always had a sense of superiority against the people of neighboring Myanmar, Laos and Cambodia," he notes.

Thailand is the most advanced economy in the Mekong River region, and the only regional country never directly colonized by Westerners. Thais take pride in this, and their sense of superiority was further fostered by "Thaification" nationalist policies in the early 1930s, which aimed to assimilate the country's minority ethnicities and cultures into the dominant identity of central Thailand. Ethnic minorities in border areas where Lao, Cambodian or other languages and dialects were spoken were taught standard Thai at school, while many Chinese migrants adopted Thai names to demonstrate their patriotism. There are less obvious ethnic cross-currents too. Urbanites from central Thailand tend to look down on people from the northeastern region of Isan because of their historical links with the people of neighboring Laos. In Thai schools, children with darker skin tones are often bullied because dark skin is associated with outdoor labor in rural areas and with ethnic minorities.

This kind of discrimination is not unique to Thailand. Much of Asia comprises multiethnic, multireligious states, and there is significant intraregional migration. Income gaps are also huge, prompting elites to find ways of controlling minorities to retain power.

Some biases are so deep rooted that they are embedded in the national language. For example, the Thai word lao is used to describe backwardness, while karen -- the name of an ethnic minority -- means feeling alienated in a foreign country. Gaijin, farang and gweilo mean "foreigner" in Japanese, Thai and Cantonese, respectively, though they are mainly aimed at Caucasians and do not necessarily carry pejorative connotations.

Around the region, the targets of discrimination are often vulnerable minorities who do not, or cannot, speak up against unfair treatment. This is also how Asian Americans were seen in the U.S. until recently, especially in comparison to African American groups, which have for decades been demanding equal rights.

Now, though, Asian voices in the U.S. are getting stronger, as Asian communities around the country protest against racial abuse. Support is growing for the #StopAsianHate movement's attempts to expose and document violence against Asians across America.

There is a lesson in the U.S. experience for Asia, where intra-Asian discrimination has also been largely hidden but is now becoming more obvious. At the least, the region needs a period of introspection. As victims and as perpetrators, #StopAsianHate is as relevant to us as to Asians living in America.