Modi has ended open defecation but that's only half the story Indarpal cleans out the septic tank of a home in Noida, near New Delhi. (Photo by Pallavi Aiyar)
PALLAVI AIYARDecember 11, 2019 09:30 JST | India
CopyCopied

In early October India proudly declared it had ended the formerly widespread practice of open defecation, following years of hectic toilet construction under Prime Minister Narendra Modi's government. In the past four years India has built more toilets than it has since independence in 1947: more than 100 million in rural areas and 6.3 million in cities, according to the country's ministry in charge of water and sanitation.

So far, so sanitary. But what happens after the flush? Almost none of these new toilets are connected to the sewer grid. India, soon to be the world's most populous nation, produces 1.7 million tons of excreta daily, much of which ends up in the open.

Recently I visited Noida, a planned city that describes itself as "green and clean." A satellite of New Delhi, Noida is home to several multinational corporations and swanky residential complexes, interspersed with urban villages housing those who serve the high-rise inhabitants.

Discarded packets of processed snacks choked the open gutters along the sides of the streets. The sludge had no identifiable color, but smelt putrid. A cow, surprisingly regal, chewed the cud in front of a small building plastered with gaudy Bollywood posters and a sign declaring it a "Luxury Hair Cut Saloon."

Further up the road the noise was deafening. A repurposed water tanker attached to a mechanized tractor occupied the width of the street. A young man who gave his name as Indarpal was using a pipe to suck up filth from a pit outside one of the residences. He worked for one of many illegal tanker operators that clean the septic tanks and feces containment pits of the two-thirds of Indian homes with no direct connection to the devastatingly inadequate sewage system.

Conventional sewer lines linked to centralized treatment and disposal plants are simply too expensive, cumbersome and water-intensive for populous, developing and water-stressed countries like India. Instead, just as mobile phones leapfrogged fixed line telephony, the solution to India's sanitation woes lies with professionalizing and empowering freelance tanker operators like Indarpal, so they can dispose of their loads safely.

The vast majority of the sludge collected by these tanker workers is dumped in water bodies and other open spaces because they lack access to government-run sewage treatment plants. As a result, 90% of surface water in India is contaminated with human waste. The health consequences are dire. In 2016 about 281 children a day died of diarrhea, according to a report by the Johns Hopkins Bloomberg School of Public Health. Almost 40% of Indian children are stunted.

Noida boasts one of the best waste management systems in the country, with three sewage treatment plants. Yet I found Indarpal disposing of his tanker-load of muck in a ganda nala, literally a dirty stream, a short drive from the home whose septic tank he had emptied. Ganda nalas are streams of plastic and excreta -- tributaries that drain into rivers, but whose water has long been replaced with garbage and sewage. 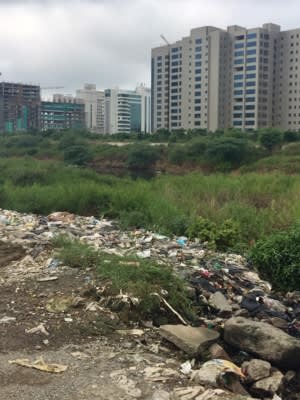 This "ganda nala" is located right by the shiny high rises of Noida. (Photo by Pallavi Aiyar)

Across the road a gleaming sewage pumping station stood idling. But because the tanker company he worked for was unregistered, Indarpal was unable to access the facility.

More than 1,000 km to the east, in Patna, capital of Bihar, one of India's least developed states, only 11% of the fecal sludge generated by 2 million residents makes it to sewage treatment plants through the sewer grid.

A 2016 pilot project run by Population Services International, a U.S.-based not-for-profit global health organization, concluded that the four sewage plants in Patna were functioning at only 60% of capacity. Yet tanker operators were either barred or charged hefty fees to dump their loads there.

PSI helped the operators to get access to two of the plants for $1.50 per load, down from the standard $4.50. As a result, 25% of the sludge previously dumped in the open is now being treated at sewage plants. PSI hopes to extend this pilot to 10 more cities across northern India.

PSI is not the only organization that has come to believe that "modern" sewer grid infrastructure might be too "20th century" for rapidly growing countries in the new millennium. Many now believe that resources are better spent on finding ways to regularize the ad hoc and stigmatized services provided by itinerant tanker operators.

The next step could be even more ambitious: With the right treatment, poop can become a resource. All that sludge lying in treatment plants around the country could be repurposed and sold to businesses and consumers as fertilizer or biogas. It could even be turned into paper.

I asked Indarpal what he thought of the idea. At first he looked uncertain, but eventually he grinned. "Why not?" he said.

Pallavi Aiyar is a World Economic Forum Young Global Leader and author of "Choked! Inside the World's Most Polluted Cities."