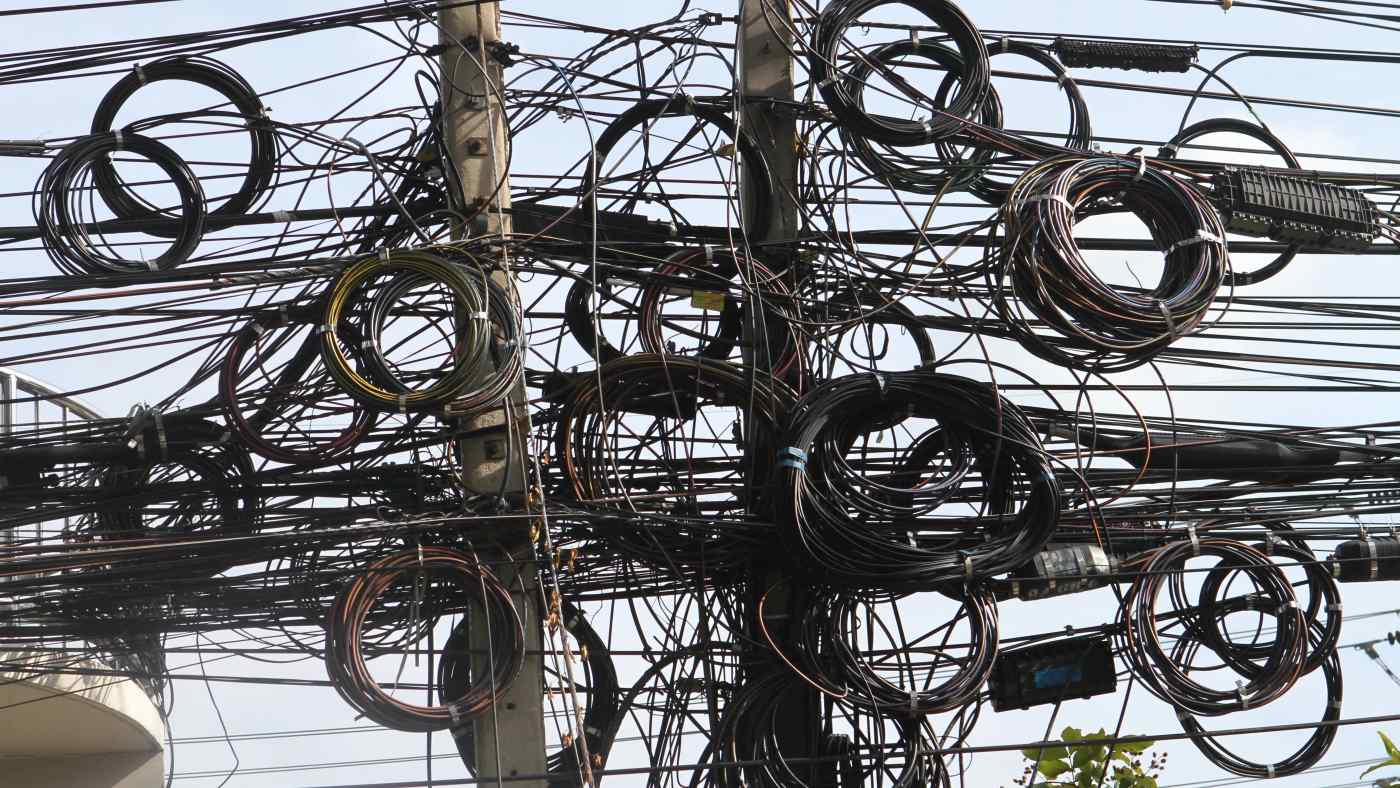 When I first moved to Bangkok in the early 1980s it was normal practice for the utility companies to string telephone wires and electrical cables from reinforced concrete poles installed by the Metropolitan Electricity Authority.

That was not too bad, because there were not too many telephones. The landlord of my rented house in central Bangkok was inordinately proud of possessing one, but modestly explained that he had spent his career working for the post office. He knew who to call.

Nearly 40 years later, the city's overhead telecommunications cables form nightmare-black webs above the streets, for while Thailand has embraced the internet and is zooming toward fifth-generation technology, the same old concrete poles are now festooned with tons of wiring.

Until now, that is. Recently the Thai government announced that the tangles of "sky spaghetti" will go underground by 2021 -- and the Bangkok Metropolitan Administration has pledged to make it happen.

If Bangkok residents tend to emit a hollow laugh at this declaration, that's because it was also reported last year -- and the year before. In fact, the idea of an aerial cable cleanup has been around for decades, but repeated proposals have been stymied by conflicts between state agencies and private operators.

Thailand is not alone in suffering a plague of overhead wiring, which is endemic throughout Asia. India and Vietnam are among the worst examples, and it is a problem even in parts of Japan. So the region will be watching closely as Thailand tries to clean up the mess.

The latest attempt began in 2016, when Thai officials and patriotic residents were stung by criticism on Facebook of the city's "tangled wires" by Microsoft founder Bill Gates, who has 19 million followers. After that, the Thai cabinet quickly agreed to a sweeping cable cleanup for the capital and major provincial cities.

The decision was long overdue, not least because the ugly aerial tangle defaces the city's streets, heritage buildings, and even gleaming new developments. As an advertisement for the government's "Thailand 4.0" digital economy plan, the wiring is not a good look.

In the late 1980s, at the cusp of Bangkok's current development surge, I bought a new-build townhouse in the suburb of Huay Kwang. A telephone was promised, but failed to appear. My cousin-in-law, a practical young man, found the neighborhood junction box and opened the door. Inside was the socket with our putative number written on it, but no connecting wire. It was two years before the connection was installed to hook up our house.

At that time, perhaps bureaucratic inertia was understandable. Since then, however, mushrooming demand has prompted telecoms providers to string ever more cables along the telegraph poles. Certainly it's easier and cheaper than burying them, but old lines are rarely removed when services are upgraded, which means that many of the cables are now inactive.

The aerial spaghetti is a mix. The thin wires are low voltage coaxial wires for cable TV, fiber-optic internet cables and telephone lines. These are occasionally seen hanging loose, especially after heavy rain, although they are unlikely to be dangerous. At the top are the MEA's thick power cables. All the wires, thin and thick alike, are well insulated. Telecoms cabling runs below the mains cabling at the top of the pole. (Photo by Ken Barrett)

There is another, more urgent factor: growing fears that the poles are becoming overloaded, with the possibility of collapse. There's also the omnipresent danger of a pole being rammed by a vehicle or toppled by a falling tree branch.

Some change is already underway. The electricity authority began an improvement program several years ago, burying power cables in pipes deep below the surface. Then in April, the BMA announced a 20 billion baht ($652 million) program to remove the telecoms cables over a two-year period.

Under this ambitious scheme, nearly 2,500 km of Bangkok roads will be cleared, with a network of ducting and pipelines laid beneath the streets. The telecoms cables will be placed in 40 cm wide trenches 80 cm below the footpath, while lines carrying significant voltage will be placed in pipelines 4 meters below the road surface. Obsolete wiring can then be scrapped, and the networks configured for the coming needs of superfast 5G mobile communications technology.

The ducts to accommodate the new underground wiring are engineered for flexibility and rigidity, and can withstand considerable movement. This is an important issue in Bangkok, where soft alluvial soil foundation, a high water table and heavy rains combine to cause frequent soil erosion, with the ever-present danger that underground cables will break or be flooded.

Sound bedding of the ducts should reduce these dangers, but the need for such precautions highlights another of Bangkok's problems -- the pressing requirement for a new drainage system to stop inadequate water disposal washing away the subsoil.

Maybe the city's inadequate, creaking, leaking drains should be the next target for Bill Gates' Facebook page.

Ken Barrett is a Bangkok-based author and architecture expert.