The flags of China and Taiwan fly next to each other at a pro-unification demonstration in Taipei's Ximending neighborhood.
CHRIS HORTONMay 22, 2019 09:30 JST | Taiwan
CopyCopied

On the last Sunday of April, Taipei's Ximending neighborhood was buzzing with throngs of tourists, shoppers and locals. As they made their way through the main intersection, many were distracted by a public demonstration occupying a street corner.

"Oppose Taiwanese independence!" an older man screamed into a microphone in the center of a cordoned-off group of tents, while two dozen or so people applauded from plastic stools. One man walking by clapped as well.

As the flags of the People's Republic of China and the Republic of China (Taiwan's official name) flew side by side in the afternoon breeze, the demonstration highlighted democratic Taiwan's open society and free speech. Such an event would not be permitted in China, where the flag of the ROC, which ruled both China and Taiwan between 1945 and 1949, is banned.

"At this moment, only the Chinese Communist Party, represented by Xi Jinping, can save Taiwan," declared a sign on the perimeter of the encampment.

President Xi said in a Jan. 2 speech that Taiwan "must be and will be" brought under the control of the CCP, which has never ruled the island of 23 million. And with Taiwan's next presidential and legislative elections barely eight months away, there are growing fears that Taiwan may vote its sovereignty away.

The island's main opposition party, the Kuomintang, moved the Republic of China government to Taiwan after World War II, toward the end of a losing battle with the CCP for control of China. But the KMT still identifies as Chinese, having morphed gradually into the CCP's preferred dialogue partner and now, seemingly, emerging as a CCP asset.

Han's victory generated non-stop media attention, raising the prospect that the KMT may be poised to recover the presidency and control of the legislature, both lost to the DPP in 2016. If that happens, the big winner would undoubtedly be China.

Earlier this year, a Taiwanese-American friend met me for lunch in Taipei after a week in her southern hometown of Pingtung. "Something's changed down there," she said, with a sense of awe and concern. Her friends and family, long-time DPP supporters, were now leaning toward the KMT. All were enamored of Han and critical of Tsai, whom they accused of mishandling the relationship with China and the economy.

On a recent trip to China, Han was given the red carpet treatment, witnessing multimillion dollar agreements to sell seafood and other produce from Kaohsiung. Taiwan's powerful pro-KMT media breathlessly reported his every move -- in one 30-minute news program I saw, every item was about him. At the time, Tsai was making an important trip to the South Pacific, shoring up ties with Taiwan's few remaining diplomatic allies. She didn't receive a single mention.

In May, after playing coy for weeks and stoking media speculation, Han finally agreed to be drafted into the KMT primary, challenging Terry Gou, the billionaire chairman of Foxconn Technology Group, and party stalwarts Eric Chu and Wang Jin-pyng. 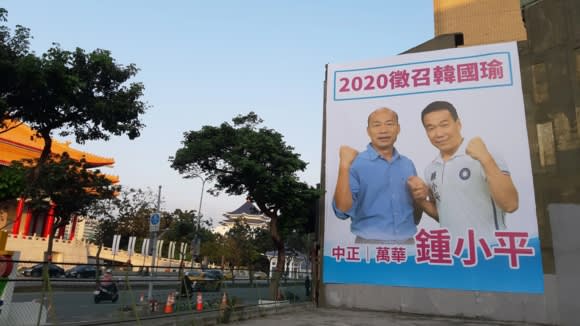 A Kuomintang politician's billboard in central Taipei urges the party to draft Han Kuo-yu (left) into its July primary.

In March, posters supporting Han began to pop up around Taipei, many featuring local politicians asking the KMT to draft him as their presidential candidate. The "Han wave" is also being fanned by local pro-China media. Despite losing some popularity following recent closed-door meetings with Communist officials in Hong Kong and Macau, Han still leads all other candidates from both parties in polls of voting intentions for the presidential election.

For many Taiwanese it seems Han can do no wrong, rather like U.S. President Donald Trump on the march to win the Republican Party nomination in 2016. Han's core platform of closer relations with China and "everyone getting rich" lacks detail, but that seems irrelevant to many voters.

During a recent visit to my local soy-milk vendor in Taipei, I noticed that he was displaying a sign supporting Han. I asked why, but received no clear answer. Unable to cite any of Han's policies, he answered simply: "I feel he has charisma."

Taiwan's presidential election is still months away, and Taiwan politics can be wildly unpredictable, as Han's meteoric rise from relative obscurity shows. The KMT will not announce its presidential nominee until July, but it already seems clear who Beijing's nominee is. What is less clear is how many Taiwanese realize that.

Chris Horton is a Taipei-based writer.