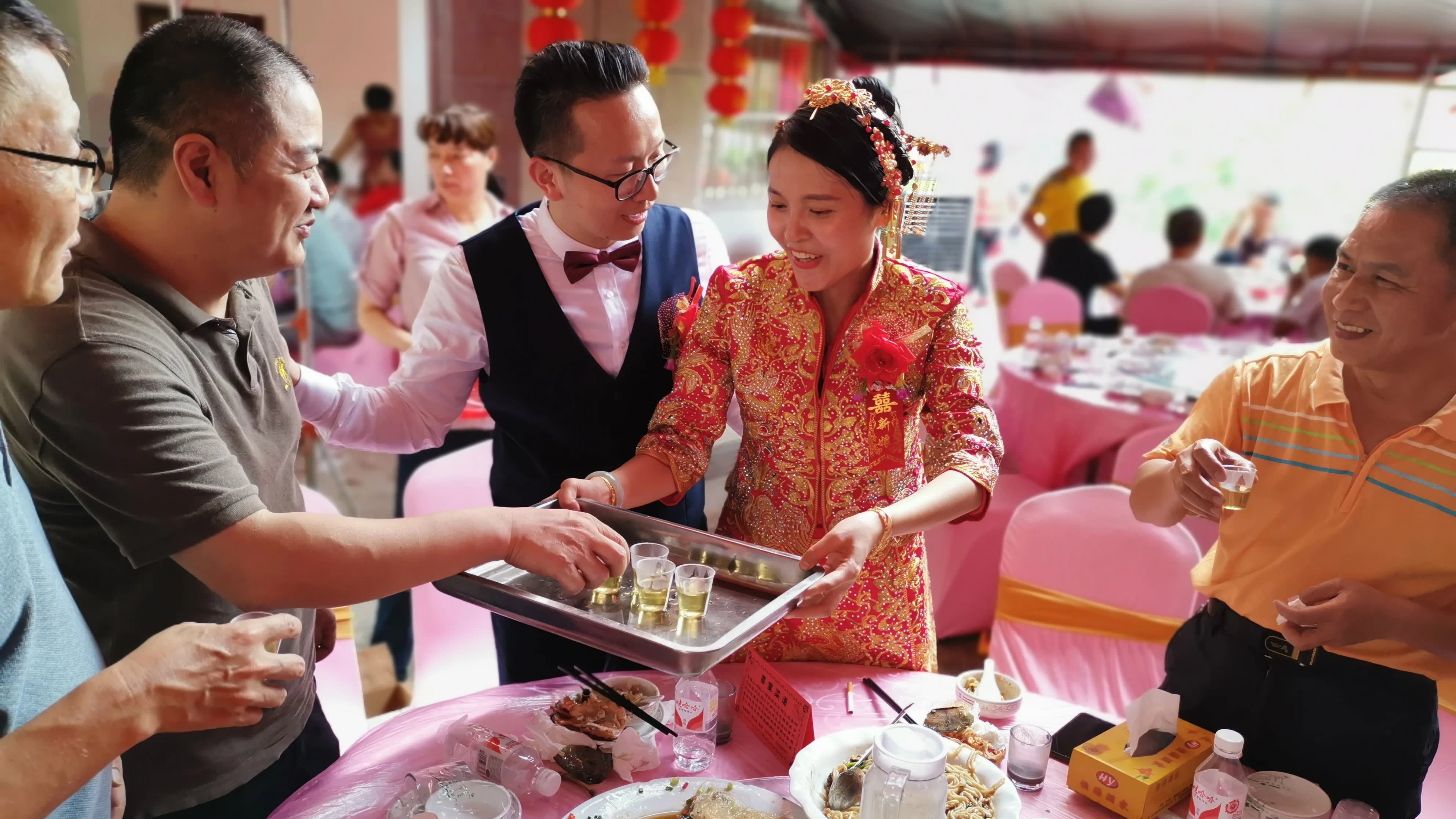 The Chens decided to hold their wedding ceremony three years after officially registering their marriage. (Photo by CK Tan)

In older days in China, the price for participating in a relationship regarded as illegitimate was high -- couples who had children before the traditional wedding ceremony risked being tied up in a bamboo net intended for pigs and submerged in water.

Nowadays, couples who cannot wait to consummate their union risk only potential public disapproval. But increasing numbers are delaying both marriage and the all-important wedding ceremony -- sometimes until after having children.

I witnessed such a wedding ceremony recently in the southeast province of Fujian, where a cousin of mine and his wife held the traditional celebration three years after the registration of their marriage, bringing with them their two-year-old daughter.

At 29, the groom was in the 25-29 age group now seen as an appropriate marrying age in China -- up from 20 to 24 in 2013, according to the China Daily newspaper. Couples are delaying apparently because they like the freedom of bachelor life, or to concentrate on careers.

My cousin said it had simply taken a while to get ready for the ceremony after his marriage, and to find a suitably auspicious day. Increasingly, though, Chinese people are delaying marriage as well as the traditional ceremony: The proportion tying the knot fell to 7.2 per 1,000 in 2018, the lowest since a dip to 9.9 in 2013, according to official data.

My cousin and his peers -- born in the decade after 1990, known to marketing experts as "Generation Y" -- are said to be marked by both independence of mind and "free and easy" spending habits. Many are the product of China's one-child policy, introduced in the late 1970s to curb population growth and abandoned only in 2016.

In true Generation Y style, the wedding ceremony invitation I received could not have been less like the traditional red card, delivered by hand. It came in the form of a "mini-program" distributed by WeChat, the popular mobile phone messaging app; tapping a button on the phone launched a video of the couple's bridal photos and notice of the upcoming ceremony.

Through the app, guests could confirm attendance, send congratulatory messages and even remit the traditional hongbao (a monetary gift more usually handed over in a red packet) ahead of the big day.

Two receptions were planned -- a lunch at the groom's village in Anxi county and a dinner a few days later in Xiamen city, where he works as a restaurant manager. Each attracted 400 guests, some of whom traveled long distances, including relatives like me from Malaysia.

Many overseas ethnic Chinese in Southeast Asia can trace their roots to southern China. The patriarch of my own clan migrated to Kuala Lumpur in the early 20th century to escape poverty and began a Malaysian branch that has now extended to six generations.

Despite the passing of time -- over 100 years punctuated by wars, China's communist takeover and the Cultural Revolution -- both sides remain connected through business dealings and cultural celebrations, including wedding ceremonies.

While formats may have changed over time, certain practices remain intact, such as the extravagant 16 dishes served at each reception. Along with premium white wine and brandy, guests were served different types of meats and seafood, which filled all the space on the 10-seater tables.

Although Chinese culture cherishes "face," the delayed wedding celebration appeared to acceptable to the guests, including the families of the bride and groom, who were happy to see their offspring married and having children. Every Sunday, parents post information about their single children at the so-called Matchmaking Conner at People's Park in Shanghai. (Photo by CK Tan)

Many parents are concerned, though, about the trend toward delay -- and some are sufficiently worried to take direct action. At the People's Park in Shanghai parents gather every Sunday morning at a spot dubbed Matchmaking Corner with handwritten profiles of their children pasted on umbrellas.

On a recent Sunday, a man who gave his name only as Zhao said he was looking for a husband for his 26-year-old daughter, who, his umbrella declared, is a graduate from an American university with a good job at a large audit firm in Shanghai.

"I wish to find one who is of good character, with a career and financial standing," said Zhao.

Marriage in China may have further to evolve. People born after 2000, known as post-millennials, are even more open-minded than Generation Y, as well as being internet-savvy and more expressive, according to a study by the Chinese internet portal sina.com.

They may turn out to be even more relaxed about marriage and wedding ceremonies, potentially triggering changes in relationship expectations throughout the Chinese-speaking world. That would be a big change among communities for which tradition remains important. But China's post-birth wedding celebrations seem to be pointing the way.

CK Tan is a Nikkei staff writer in Shanghai.