Fate of Beijing bar a lesson in urban development

City's demolition drive is changing the face of the capital Flower power Beidong market’s resilient traders have learnt to work through the anxiety that is part of business in China. (Photo by Shrish Rane)

The bulldozers had done their work with their customary ruthless efficiency. If you had not known what had stood there, if you were driving by for the first time, it would have looked like a freshly hoed field. Only if you stopped would you notice the broken bricks in the furrows, the bits of plaster and fugitive glass.

The flattened plot was all that was left of a little strip mall that had stood in my corner of suburban Beijing since before I moved there in 2016. It had housed a grocery, a German-run bakery next door to an Australian vendor of gourmet meats, a realtor's office, a spa and a bar I called Cheers.

Two weeks earlier, I had been a participant in a pub quiz there. The place was packed. One of the proprietors, a genial Chinese woman I will call Lily, dispensed Sichuan peanuts and imported beer. Most of the customers already knew each other, and everyone knew Lily. There was a very active WeChat group dedicated to events there. Cheers was a cornerstone of the local expatriate community.

Just days later, a demolition order was pasted to Lily's door. She stood disconsolately by the parking lot, bottles and cans on a table in front of her, selling her inventory to recoup her losses. Friends, alerted by the chat group, stopped by to pick up cheap booze and murmur condolences. An earthmover stood quietly in the field, a mute witness to what had passed.

Things move quickly in China, we are told. Beijing's push toward "urban rejuvenation" since 2017 has been reported extensively. In the city, the walling up of "undesirable" and illegal businesses was dubbed the "great brickening." Many restaurants, bars and the like disappeared almost overnight.

Yet the tenants of the strip mall had been served their first notices 18 months previously. The German and the Australian moved out, unwilling to risk legal action. The local owners stayed on. When no further action transpired, they reopened. Until the bulldozers came they opened for business, trusting to their nimbleness, their links with local officials, and luck.

The German baker told me last year that there was no chance he'd come back. The space was clearly illegal. He'd known that when he moved in, and had thought the cheaper rent worth the risk. He couldn't afford a legal site because of skyrocketing rents. Now he was stuck, but he wasn't going to throw good money after bad. His "connections" weren't strong enough to rescue him if trouble came calling. 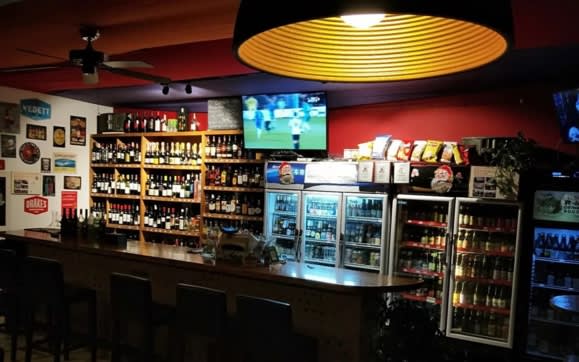 The bar in suburban Beijing that the author called Cheers

This is a problem that consumes small businesses in rapidly morphing Beijing. The sheer financial weight of compliance with a bewildering array of codes is crippling. That non-compliance can be weaponized by the authorities -- for petty graft, or worse, summary closure -- is just one more thing to worry about in this most anxious of cities.

One of the most popular retail spaces in our area is a mixed space we call the "flower market." Here, florists, curio stores, picture framers and sellers of animal feed crowd together under one roof. They're all locally-owned and managed. You can buy everything from imported barbecues to "antique" desks.

Apparently it is illegal as well, and the owners were served their notice of demolition in late 2018. Panicked conversations over WeChat ensued, with notices of stock-clearing sales. Then, suddenly, it blew over. My inquiry as to whether the situation had been resolved or simply deferred was deflected with a smile. "We're still open. Who cares?"

Much of the anger that followed the urban rejuvenation drive has focused on the fate of spaces that catered to expatriates. Yet the peddling of beers to thirsty foreigners isn't just a public service. It is also a commercial activity undertaken by locals to scratch a living in a city that gets more expensive every day.

Lily found a new space almost immediately. The expats in her clientele will find her again. Even if they don't; their need for this space is transitory, because they will all leave, eventually. But this is Lily's community, and she must find her way in it. Leaving isn't an option for a local woman of her background and means.

Across from where her bar once stood is an upscale villa development. Now that the illegal vendors have been cleared away, another builder may see opportunity. New, more expensive buildings, catering to a different sort of Beijinger than Lily and her neighbors, will grow from this freshly-hoed field. I can only hope that the occupants of those new developments will find their way to Lily, wherever she happens to be.