In recent years there has been growing interest in cultural and historical linkages that connect seemingly disparate societies. As a Nepali writer from the Shakya clan, belonging to the Newa community and hailing from the city of Patan, adjoining Kathmandu, I grew up with stories of how our ancestors traveled the world.

My curiosity grew as the internet provided previously unimaginable access to places, documents and stories. In Beijing, for example, I learned that  there are hutongs (lanes) designed by Arnico, an artisan from Patan who built many temples in the city under Kublai Khan, fifth head of the Mongol empire, who ruled China from 1272 to 1294.

Other Nepalis moved to the islands of Java and Sumatra, in what is now Indonesia. Javanese legend attributes the UNESCO World Heritage-listed Buddhist temples at Borobudur, built in the eighth and ninth centuries near Muntilan in central Java, to Gunadharma, an artisan thought to have hailed from Nepal.

Visiting these shrines, I felt curiously at home. The carvings in the restored gates look similar to those at my family’s local temple, the Hiranya varna Mahavihar (Golden Temple) in Patan --  not least because the lions in both temples have faces resembling monkeys. Real lions were not found in either place.

The way in which statues of the Buddha are orientated in six different directions at Borobudur is also similar to their arrangement in the Golden Temple and the Swayambhu temple in the Kathmandu Valley. Several other Buddhist temples seem to have been built in this manner -- including large terrace-style stupas (dome-shaped Buddhist shrines) constructed at  Nalanda and Antichek in India and at Paharpur in Bangladesh. 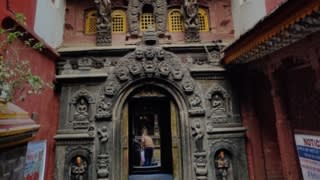 There are many other similarities. For example, the Buddha’s eyes in the pillars of the Mendut temple in Borobudur are similar to those found in the Swayambhu temple. Researchers have also found similarities between the floor plans of Borobudur and the Gyantse Kumbum temple in western Tibet, also built by Nepali artisans. And there are mandalas (geometric arrangements of images) at Borobudur that resemble images in Tibetan and Nepali stupas.

By the 1970s, the temples at Borobudur were largely in ruins, having decayed badly under Dutch colonial rule from 1800 to 1949, when part of the complex was used as a café. Indonesian tourist guides tell visitors that the Dutch plundered the temples, removing many images now hanging in museums and private homes in the Netherlands.

Restoration was begun by UNESCO in the 1970s, in line with a master plan produced in 1972 by the Japan International Cooperation Agency,  and the site was given World Heritage status in 1991 -- an event described by Moe Chiba, head of the cultural unit of UNESCO’s Science Bureau for Asia and the Pacific, as a “game changer” for restoration of the temple complex.

In a way, though, the successful restoration of these temples has created a problem that did not exist before -- the widespread view that the point of a World Heritage listing is to provide commercial value through tourism. This has led to overcommercialization of the site at Borobudur, culminating in a controversial concert by the American singer Mariah Carey in 2018. Cheap entertainments unrelated to the heritage site flourish because they are said to be attractive to tourists.

The Indonesian government’s priority for Borobudur -- and a 10th century Hindu temple complex at Prambanan, in nearby Yogyakarta -- is to take advantage of the business opportunity created by their World Heritage status. But a shift in thinking is required to reinstate conservation and historical research as the principal objectives of renovation and reconstruction.

The key change needed is an improvement in heritage management, currently shared between UNESCO, the Indonesian government and local authorities. The government has launched an attempt to unify different agendas, and the Ministry of Public Works and Housing is developing an integrated tourism master plan for Borobudur, Yogyakarta and Prambanan.

It is not yet clear whether the plan can be an effective tool for coordination. But on a recent visit, I was struck to see how many of the guides and sightseers at the temples at Borobudur and Prambanan were Muslims. My guides commented repeatedly on the similarities between Javanese language and culture and South Asian civilizations.  That is a potent reminder that tracking historical and cultural ties between countries with different religious and sectarian cultures can yield valuable cross-fertilization. To me, it stands as testament to the enduring nature of my own clan’s contribution to modern Indonesia.

Sujeev Shakya is the author of “Unleashing the Vajra -- Nepal’s Journey Between India and China.”