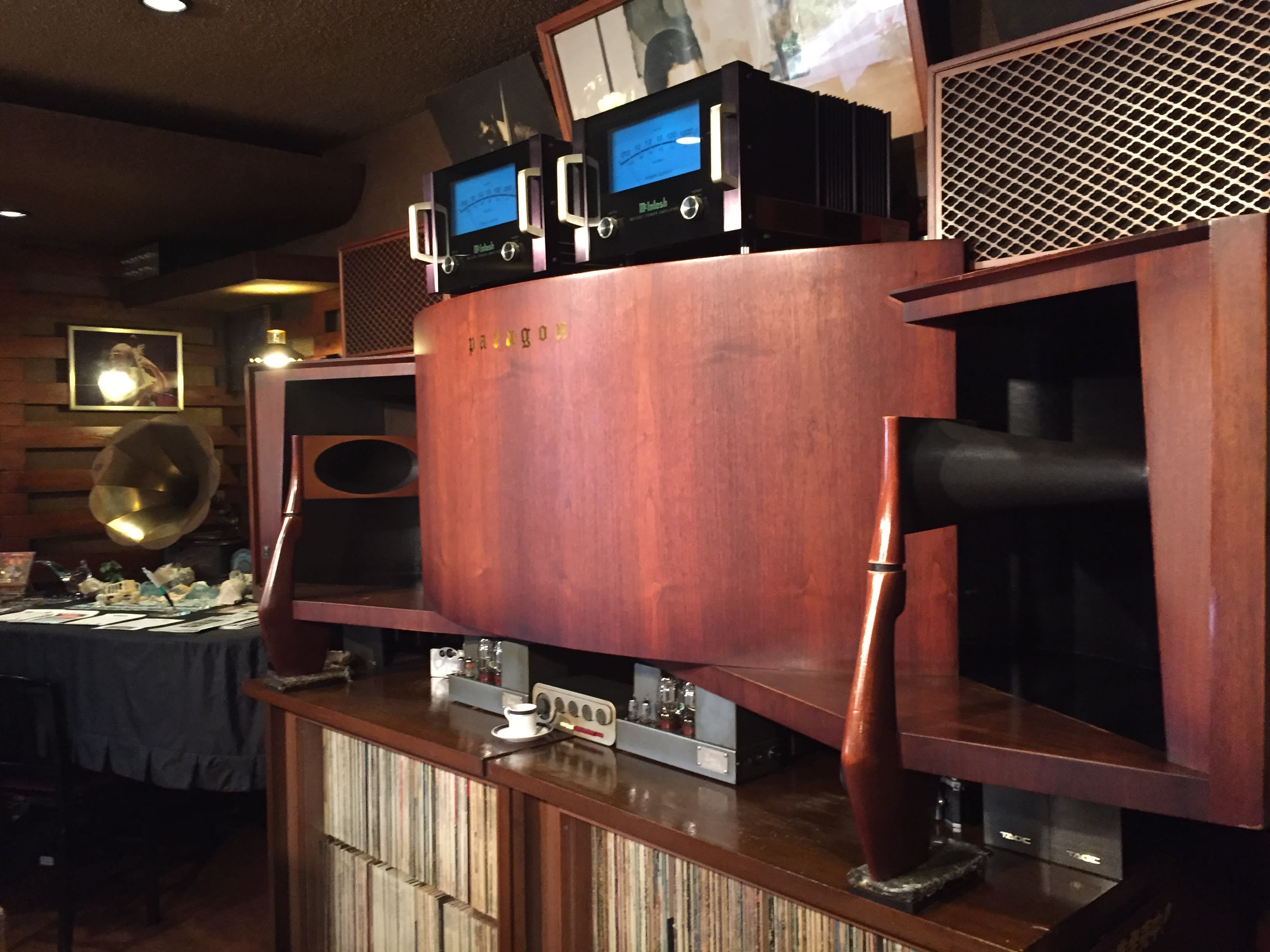 A massive, walnut-paneled speaker gets pride of place at Paragon, a jazz cafe in Japan's southern Kagoshima Prefecture. (Photo by Ken Moriyasu)

Near the southernmost point of "mainland" Japan, in Ichikikushikino, Kagoshima Prefecture, there is a jazz cafe which, from the moment you enter, makes you forget you are in a town of just 13,500 households, or even, perhaps, that you are in the 21st century.

Lining the walls of Paragon, which opened in 1976, are some 5,000 jazz records. To one side is a massive walnut-paneled speaker -- its curiously anachronistic official name is the JBL-Ranger Paragon Integrated Stereophonic Reproductor. Up front is a stack of paper inviting guests to "feel free to make a request," and three lines asking for the song title, the artist and the album it is from.

My wife happily wrote: "No Problem, Duke Jordan, Flight to Denmark." The bespectacled owner, quietly dripping coffee through a filter, took the paper and stared for a full 10 seconds. "I'm not sure we have this ..." he said, looking disappointed. Then, eyes brightening, he said: "Would it have a white cover?"

He turned to the shelf, shuffled through several jacket sleeves, and pulled out an album with a cover showing a man standing in snow. He placed the 1974 record on the turntable and dropped the needle. After some crackling and scratching, the powerful rhythm of "No Problem" filled the cafe.

Despite serving $5 coffees -- not cheap for this port town -- Paragon is full. It is full of young people who come to hear the sound of a vinyl record. It is something old, but very new to them.

This small cafe is a microcosm of something happening across Japan: the roaring comeback of the vinyl record. According to the Recording Industry Association of Japan, there were 799,000 records produced in 2016, a sevenfold increase from 2009. 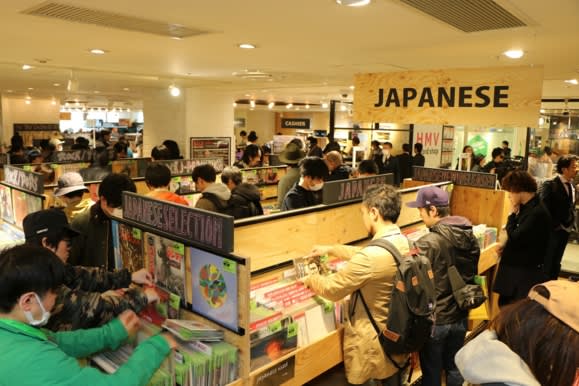 HMV Records in Kichijoji on opening day, earlier this year.

PAST PERFECT Acknowledging the trend, Lawson HMV Entertainment opened its third record store this year in Kichijoji, western Tokyo, following stores in Shibuya and Shinjuku. The Japanese unit of Britain's HMV, which was bought out by convenience store operator Lawson, has 60,000 vinyl records for sale at its newest shop, ranging from jazz to rock, but not classical. Prices start at around $10, for a standard Beatles album, and reach a staggering $4,000 for a 1957 first-press edition of John Coltrane's legendary album "Blue Train."

The choice of trendy Kichijoji reflects the company's confidence in capturing the hearts -- and wallets -- of the teenagers and 20-somethings who hang out there. "Our products are a combination of records brought from overseas and those bought secondhand from owners in Japan," a shop attendant told me recently. "Ideally, we would like to procure entirely from Japan so as to cut import costs," he added.

HMV should have no worries over inventory after 2018, when Sony begins in-house production of vinyl records for the first time in nearly three decades at a factory in Shizuoka, just southwest of Tokyo.

Preparations are underway at Sony Music Studios Tokyo, one of Japan's foremost recording studios, near the Roppongi entertainment district. A 10-sq.-meter basement room is home to a record-cutting machine that was installed in February. The machine produces metal stampers used to make vinyl records.

Cutting is a delicate process, with the quality of the sound affected by the depth and angle of the grooves. And Sony is scrambling to bring in veteran record engineers, most of whom are retired, to pass on their knowledge.

But the return to vinyl is not simply a matter of nostalgia. The turntables sold at electronics retailers in Tokyo are a mixture of past and present technologies -- at 21st-century prices of $400 to $550. With Ion Audio's turntables, for instance, the crackling sound of a needle can be sent wirelessly and played through a Bluetooth speaker. USB recording allows the user to record the analog sound of a record on to a digital device for listening, say, on the way to work.

Why the reversion to old ways? Searching for and listening to songs has certainly become more convenient with music streaming. But many fans feel that has turned music from art to mere data, and robbed them of the joy of owning and displaying a physical object like an album jacket.

A digital recording of a crackling album -- a one-of-a-kind version -- fulfills this desire to "own" music, something that cannot be deleted with the swipe of a finger. It also reflects a yearning for authenticity, and a return to a slower pace of life. The internet has made life faster in nearly every way, but not necessarily happier. People naturally fear a future where robots equipped with artificial intelligence start talking to each other and disobeying humans. The sound of an imperfect vinyl record is comforting, somehow.

Smart vinyl? Heck, we might as well call it "e-analog."