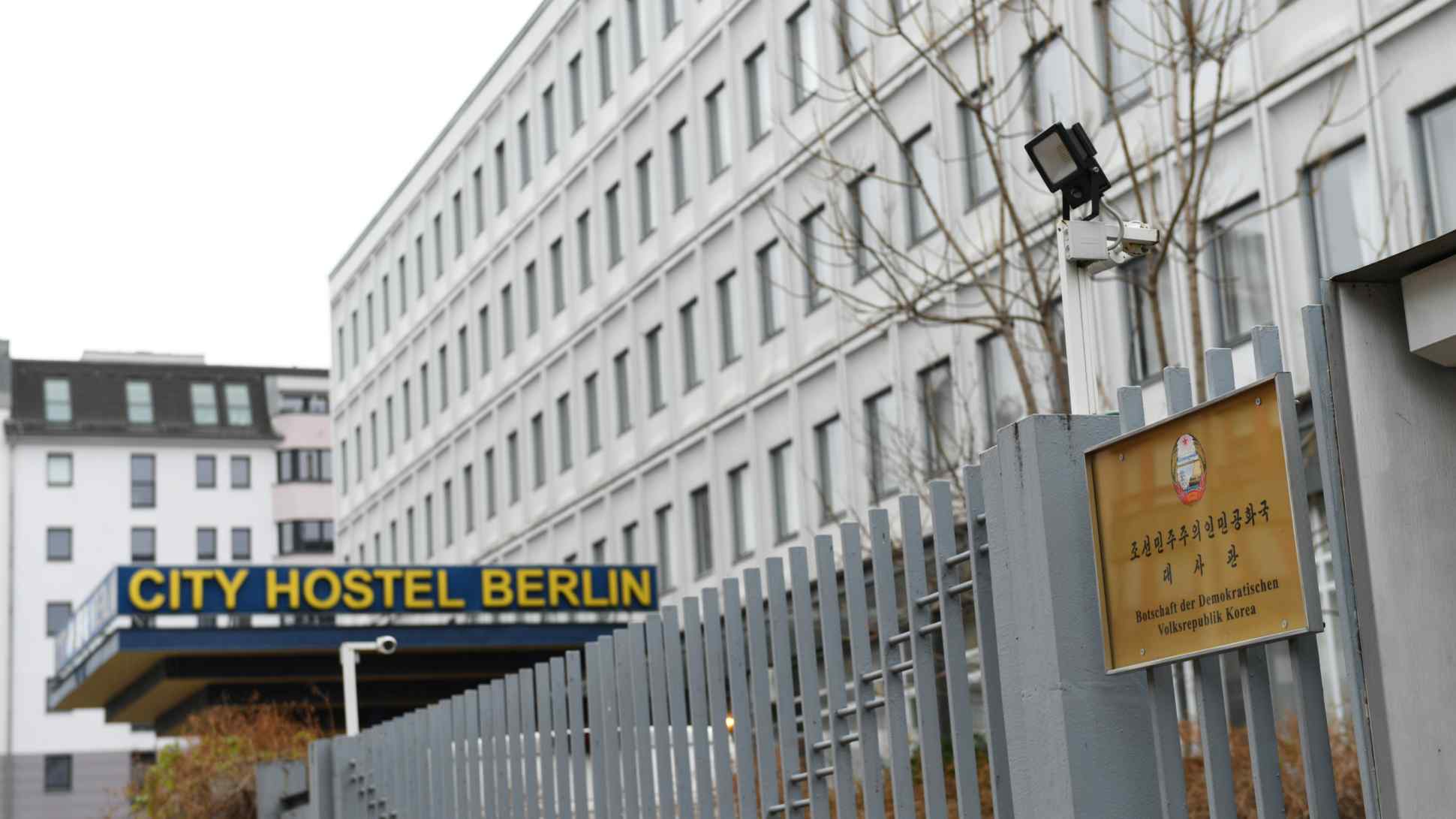 A view of the City Hostel Berlin, on the grounds of the North Korean embassy, in the city center.   © Reuters
Tea Leaves

Cityhostel Berlin is a drab-looking building in the heart of Berlin, near such tourist attractions as the Brandenburg Gate, Checkpoint Charlie and the Reichstag. With dormitory beds available from just 13 euros ($14) a night, it is mainly used by backpackers and school groups.

The young European clientele, who can often be seen taking selfies on the premises are apparently unaware that the sprawling hostel, with about 450 beds in 100 rooms, is located in the North Korean embassy compound in the German capital. But that may explain why the guests complain about the hostel’s dubious hygiene standards, with comments on TripAdvisor about dirty floors and unwashed sheets. A young Danish visitor said she was so miserable that she “cried herself to sleep” every night.

The hostel – although closed temporarily under the city’s coronavirus restrictions -- has managed to stay in business despite repeated attempts by the German authorities to close it, not because of poor customer reviews, but rather because it violates United Nations sanctions against North Korea, which were imposed after its fifth nuclear test in 2016. The hostel was among properties suspected of providing illegal profits to the Pyongyang regime under the sanctions. The operation was also in breach of a 2017 European Union directive that bans commercial activities by North Korean embassies. In 2017, Germany’s foreign ministry cited the EU directive to "shut down [this] financial source to the North Korean regime as quickly as possible."

Yet, somehow, the hostel remained open due to internal German legal wrangling. When the local Berlin borough of Mitte ordered the hostel closed in November 2018, its operator, a Turkish-registered  company called EGI, appealed. The company argued that it had rented the premises from North Korea since 2007. Its lawyer claimed in court that it had not paid the monthly rent of 38,000 euros since April 2017, so was no longer breeching international sanctions .

It is unclear why North Korea would have waived rent on the hostel premises for nearly three years, which would amount to nearly 1.4 million euros by now, when its embassy officials around the world are expected to finance their operations through local fund-raising activities.

In January, a Berlin administrative court rejected EGI’s argument and ordered the hostel’s closure. The decision was welcomed by the U.S ambassador to Germany, Richard Grenell, who tweeted that his staff had “been hard at work getting the hotel shut down. It seems like a no-brainer to us.”

But still nothing happened. The reason this time was that the Mitte borough decided it could not take action until the legal battle had been fully resolved, since the administrative court’s decision had only been a preliminary one.

“An enforcement by the borough office that is not based on a final verdict would not only be questionable, but would breach the fundamental principles of rule of law and separation of power,” it said in February.

Tom Schreiber, who speaks on security issues for the Social Democratic Party in the Berlin state parliament and has been campaigning against the hostel, attributed the slowness of the German authorities’ response in part to the reluctance of officials in Mitte to act on an issue they see as a matter for the national government.

“The result has been a lengthy procedure, which lacks proactivity and intent by the authorities,” Schreiber told the Nikkei Asian Review. “Of course, for the hostel’s operators this situation has been more than welcome; each passing day running the business under the current circumstances is immensely lucrative and, hence, preserving the status quo is in their best interest.”

Even when in mid-March, Berlin imposed an anti-coronavirus measure that forbade hotels to rent rooms to tourists, the Cityhostel stayed open. Police attempting to enforce compliance were told to leave by North Korean embassy staff who invoked the premise’s diplomatic status.

It was only dwindling tourist numbers and the new city curfew, along with the threat of hefty fines for breaching anti-coronavirus measures, that have now forced EGI to temporarily suspend operations of the hostel. But it will no doubt reopen once the  measures are lifted.

“The City Hostel rent is chump change for [North Korean leader] Kim Jong-Un,” said Soo Kim, an analyst at the RAND Corp., a U.S.-based think tank. “But its closure would set a lesson for other countries and third-party entities on the consequences of dealing with nefarious actors such as the North Korean regime.”

The ultimate irony of the Cityhostel saga is that North Korea, the world’s most totalitarian society, has maintained the hostel by exploiting legal loopholes created by Germany’s rigid adherence to checks and balances, and its highly decentralized government system -- established after 1945 to guard against the rise of an authoritarian regime.

Jens Kastner is a Hamburg-based journalist.