As online shopping booms, couriers seem to be everywhere, all the time 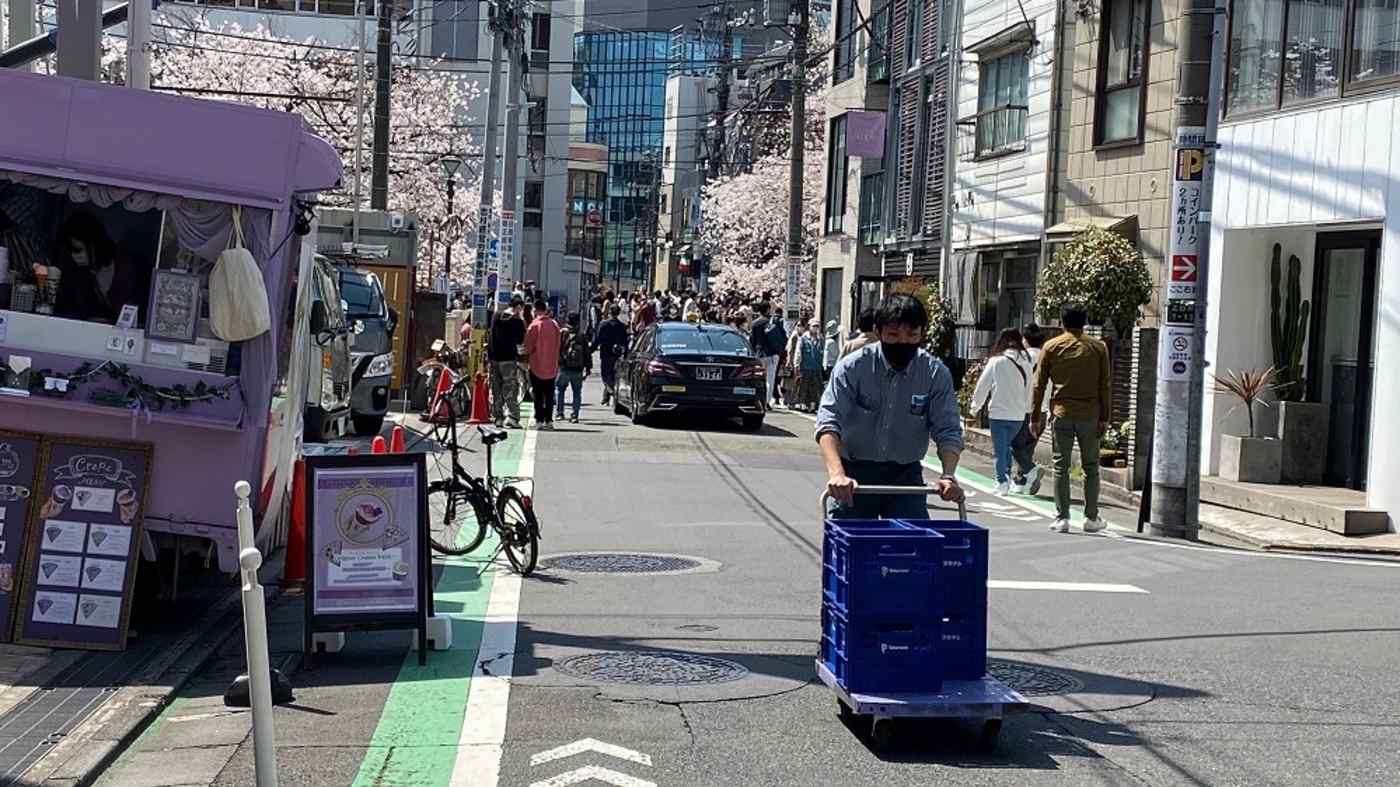 Wherever you go in Japan, such as here, near Tokyo's Nakameguro Station, at any given moment, someone, somewhere is delivering something to somebody. (All photos by Edward M. Gomez)
EDWARD M. GOMEZJune 9, 2021 11:06 JST | Japan
CopyCopied

Imagine a contemporary version of Shakespeare's Hamlet, brooding not about the merits of existence ("to be, or not to be") but rather about whether or not to make an online purchase. A decision to buy would trigger a chain of events in a complex system in which labor, finance, advertising and the distribution of goods and services converge. To click, or not to click, that is the question.

Shopping online has become commonplace in the era of COVID-19, during which the pandemic has turned even ordinary supermarket forays into stressful, infection-threatening affairs. If today's version of the metaphysically tortured Hamlet decides to go ahead and buy, the result of his rumination-fueled action in much of Asia will be the delivery of a corrugated cardboard box to his door.

So it is that, today, in Japan, such national companies as Yamato Transport, Sagawa Express, Japan Post and Seino Transportation, as well as countless local outfits, seem to be doing a booming business constantly moving stuff around. 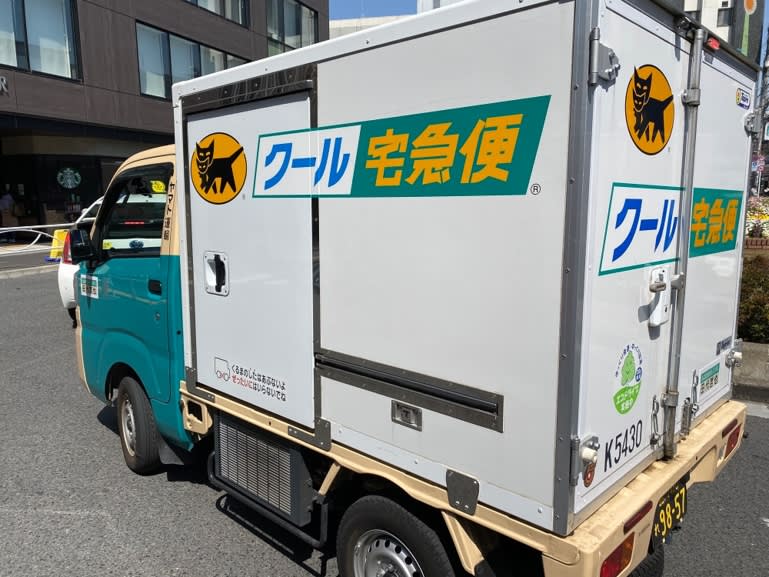 A Yamato Transport refrigerated truck in front of Yutenji Station in Tokyo. The words on its side say: “Cool. Express Home Delivery.”

Before the pandemic, regular visitors to Tokyo could take the pulse of what appeared to be hot in popular culture and consumer behavior simply by strolling through the capital's various neighborhoods. One year, dog-grooming parlors and doughnut shops seemed to be popping up on every corner. More recently, in one popular district, I've noticed a surfeit of dry cleaners, hair salons and dentists' offices.

Today, however, delivery-service companies appear to be some of Japan's hottest properties. Their presence can be felt just about everywhere. In any town or city, like swarms of busy bees, uniformed employees of the biggest companies, and more courier services than one can count, may be seen buzzing around purposefully, pushing carts, sputtering along on bicycles and scooters, or pulling up in impressive, refrigerated trucks proudly emblazoned with their companies' logos.

With clipboards, mobile phones, and waist-mounted, distribution-tracking, digital gizmos, they offer vivid reminders that, in Japan, at any given moment, someone, somewhere is delivering something to somebody, even as, elsewhere, other customers may be offering up yet more packages to be whisked away by these modern heirs of Hermes, the fast-moving messenger of the gods of ancient Greece. They smile. They bow. They zap whatever passes through their hands with electronic gadgets. They fill out mysterious forms in quintuplicate. 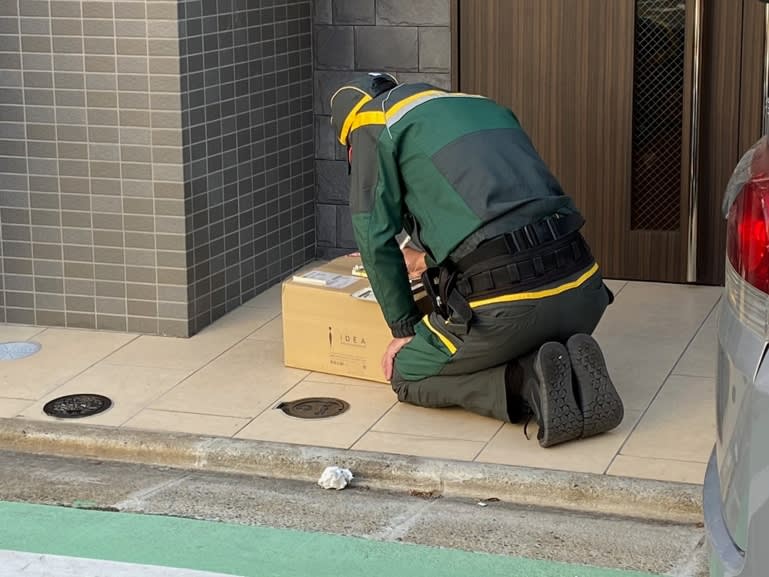 In Tokyo, a Yamato Transport courier stops to fill in a form prior to dropping off a package at its destination address.

These days, the proud motto of the U.S. Postal Service applies more appropriately to the tireless dispatchers and delivery staffs of Japan's package-handling companies. "Neither snow nor rain nor heat nor gloom of night stays these couriers from the swift completion of their appointed rounds," the USPS slogan declares. Nor will the snack-food temptations of the many konbini (convenience stores) from which Japanese delivery agents routinely pick up packages customers have dropped off -- another convenient service their companies provide.

In the U.S. and some other countries, "service" appears to have become a pejorative word for many service-sector workers. But for foreigners in Japan whose home countries are known for their surly, unfriendly shop clerks, many a customer-service experience may come as a pleasant surprise.

Recently, I clicked a small order of office supplies into existence. Two days later, a Sagawa courier in a bright-blue outfit brought a small box to my door. A few days later, the second portion of this order arrived, but I was not present when its bearer turned up. 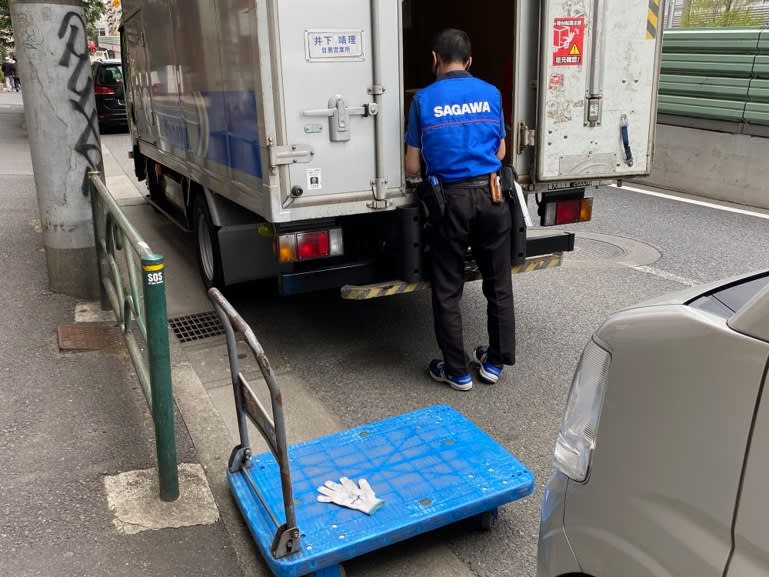 A Sagawa Express employee in his company’s familiar bright-blue uniform, along with one of the flatbed carts that are his job’s most indispensable pieces of equipment.

Instead, I arrived 20 minutes later to find a custom-printed Sagawa advisory informing me of the courier's name and personal mobile phone number, as well as of the hours during which he would be working in my neighborhood that same afternoon. Respectfully, the notice invited me to call the deliveryman myself to let him know when he might again attempt to drop off my package.

Immediately, I called and identified myself, only to be greeted by a jovial voice and regaled with niceties by a Sagawa courier who could have been my long-lost brother. Just 15 minutes later, he was at my door with a tiny padded envelope, whose humble size and contents -- applicator caps for glue bottles -- seemed to me to be immeasurably unworthy of the shower of politesse with which it had been conveyed to me.

Conceptually, on a grand scale, one might imagine the complex, constant motion of Japan's legions of courier-service workers as constituting some kind of real-time, perpetually shape-shifting performance art or choreographic event.

If viewed as Shakespearean messengers in a modern-day industrial pageant, now, more than ever, the collective role they play is one that has become vital within Japan's economy. They work feverishly. They're everywhere. Somewhere, right this minute, one of them is loading a cart with packages.

And when it comes to providing indispensable services, all of these hardworking messengers -- they really do deliver.