The streets in New York's Chinatown are narrow. Packed with humanity, loud conversations and small businesses -- noodle restaurants, laundries and foot massage bars -- they spill out the sounds and smells of East Asia.

Some 100,000 people live in this part of Manhattan Island, which lies between fashionable Tribeca and the Lower East Side, just a few minutes' walk from the Manhattan Bridge across the East River to Brooklyn. This is the highest concentration of ethnic Chinese in the Western hemisphere.

Chinatown is a tribute to America's success as a cultural melting pot, and to the stamina of an immigrant community that has weathered hostility and discrimination to pursue the American dream -- a thought made more salient by the "send them back" chants aimed by supporters of President Donald Trump at political opponents with ethnic minority backgrounds.

At its heart stands the Museum of Chinese in America, telling a story that runs from the 13th century Venetian explorer Marco Polo to the present day. But the most chilling of the museum's exhibits mark the era of lawful anti-Chinese discrimination from 1882 to 1965.

At the beginning of its industrial revolution, the U.S. encouraged Chinese immigration because it needed workers to build railroads and other infrastructure. But by the late 19th century, racial resentment had taken over. Chinese businessmen were portrayed as manipulative and money-grabbing, and Chinese workers were accused of stealing jobs from Americans.

Politicians won favor with voters by whipping up hatred against the Chinese. "Shall we have Chinese No! No! No!" reads one museum exhibit. "Great Anti-Chinese Mass Meeting," advertises another. "Chinese Exclusion is the best remedy," concluded a Congressional briefing paper. 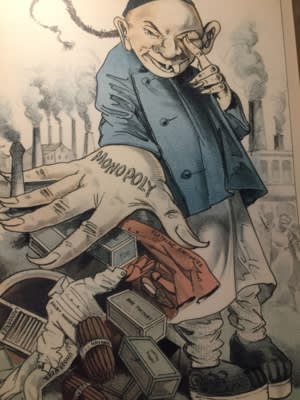 One wall of the museum is given to a display of flat irons for pressing clothes, making the point that the caricature view of the Chinese laundry reflects less of a cultural fixation about clean clothes than an economic need to make a living.

On May 6, 1882, President Chester Arthur implemented the first American law directed against a single national grouping. The Chinese Exclusion Act was hugely popular. Immigration was banned (initially for a decade; later permanently) and the 35,000 Chinese in the country, almost all male, were confined to menial work.

Americans became enveloped in the specter of the "yellow peril" -- a fear that hard-working and scheming Orientals would take over the U.S. This narrative was amplified in popular culture by best-selling fictional villains such as Dr. Fu Manchu, created by the British author Sax Rohmer, who used imaginative methods and assassins from secret societies to dispose of enemies.

The Chinese Exclusion Act was repealed in 1943, not because of an American change of heart, but because the December 1941 Japanese attack on Pearl Harbor triggered a realization that if the yellow peril existed it comprised several strands. As China emerged as a U.S. ally, posters appeared showing a soldier under a very different rubric: "Chinese. This man is your FRIEND. He fights for FREEDOM." An anti-Chinese poster from 1892   © Museum of Chinese in America

Even so, restrictions remained on property ownership, and Chinese immigration was capped at 105 people a year. Only in 1965 was the board swept clean when a new Immigration and Nationality Act decreed that there should be no discrimination against any ethnic group.

The overarching story is of struggle and intolerance, made more poignant because China is once again being elevated onto a hostile platform. U.S. sanctions aimed at the Chinese technology giant Huawei Technologies encapsulate the ideas of strategic threat and commercial competition. Trump's trade war rhetoric reflects 19th century fears that U.S. jobs are being stolen. And China's rise, exemplified by the autocratic President Xi Jinping and the Belt and Road dealmakers roaming far flung lands, feeds off the legacy of Fu Manchu. I asked a young Chinese American looking at an anti-China poster in the museum whether it could happen again. "With Trump, who knows?" she said. "Muslims. Mexicans. Who next? But I don't really want to get into that." She didn't want to give her name either.

Outside on the jostling streets vertical billboards in English and Chinese advertise "Famous Sichuan," "Best Beauty Salon" and "Vegetarian Dim Sum House." The languages of these streets are mainly those of coastal China -- Cantonese and Fujian. Their conversation is about food, money and the weather -- but not politics, because people here have learnt to keep their heads down and concentrate on earning a living.

Humphrey Hawksley is an Asia specialist. His latest book is "Asian Waters: The Struggle Over the South China Sea and the Strategy of Chinese Expansion."