Interest in new and traditional writing soars despite rampant consumerism Against the colorful backdrop of Vietnam's Tet (Lunar New Year) holidays in late January, there is plenty of evidence of rising consumerism among the country's burgeoning middle class. Hanoi's Doi Moi economic policy reforms from the mid-1980s were intended to drive a shift toward a socialist-oriented market economy. What emerged was a distinctive blend of capitalism and socialism, with growing focus on entrepreneurism and material success. One surprising trend, however, has been the revival of interest in Vietnamese literature -- evidenced by the crowds in bookstores buying books as new year gifts.

Less than 30 years ago, Vietnam was among the poorest countries in the world -- a time when, Vietnamese friends tell me, life was a hard scrabble and even basic goods were scarce.

In the past two decades, the country has averaged annual economic growth of 6.7%, according to the World Bank. Its middle class is now among the fastest growing in Southeast Asia, with more than 45 million people lifted from poverty between 2002 and 2018. On the crowded streets of Hanoi and Ho Chi Minh City, signs of prosperity range from new SUVs to gleaming office buildings, luxury apartments and high-end boutiques such as Gucci and Prada.

All the more surprising, then, that traditional Vietnamese literature has drawn new devotees amidst the consumer boom. Perhaps it is partly because ancient folk stories like "Princess Lieu Hanh, Tea-Seller of Ngang Mountain," featured in "Two Cakes Fit for A King: Folk Tales From Vietnam" -- a celebrated anthology compiled by Nguyen Nguyet Cam and Dana Sachs -- speak to a new generation of Vietnamese women, with their tales of courageous and empowered princesses.

Folklorist Nguyen Dong Chi says such traditional stories reinforce a sense of national identity that Vietnamese cherish amid the cultural and social dislocations in their fast-changing world. Many single women, for example, no longer live in their parents' homes and most only occasionally wear the ao dai, the graceful national dress.

I am particularly struck by the growing interest in literature during my occasional visits from Hanoi to Ho Chi Minh City, where Vietnamese friends like to stroll downtown to "book street," officially called Nguyen Van Binh. This 150-meter avenue leads to Notre Dame Cathedral, and is crowded with families at kiosks operated by popular book chains.

There are now about 12,000 bookstores in Vietnam, according to book trade journal Publishing Perspectives. In the past decade, numerous trendy book cafes have opened in Ho Chi Minh City, including BOA Bookstore, Common Cafe, and the Monologue Book Cafe. BOA is located on the second floor of an old walk-up apartment in District 3, and claims to be the leading English-language independent bookstore in town. 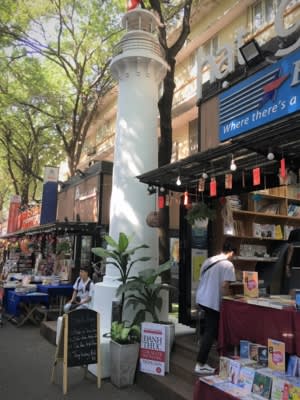 This rapid expansion of book-buying within Vietnam has been accompanied by rising interest in translated Vietnamese literature abroad.

There are no official figures for overseas sales, largely because most translated works are produced by small U.S. independent publishers such as New Directions Publishing, Other Press, Melville House, Graywolf and Illinois-based Northwestern University Press.

But Publishing Perspectives, which tracks book publishing, notes steadily growing overseas interest in both Vietnamese contemporary fiction and traditional classics -- highlighted by the attendance of more than 200 poets, writers and translators from 46 countries at the fourth international conference on Vietnamese literature in Hanoi in February 2019.

Contemporary translated authors include Nguyen Huu Thinh, Vietnam's poet laureate and chairman of the Vietnam Writers Association; Nguyen Khai, whose novel "Past Continuous" brings to life the Vietnam War; Da Ngan, whose novel "An Insignificant Family" can be read as a study of the country's post-war struggles; and Le Minh Khue, whose short story collection "The Stars, the Earth, the River," views the war and its aftermath from a young woman's viewpoint.

According to translator Dana Sachs, a key factor in rising U.S. interest has been the critical success of Vietnamese-American writers such as Ocean Vuong, author of the best-selling "On Earth We're Briefly Gorgeous," and Viet Thanh Nguyen, who won the 2016 Pulitzer prize for his first novel, "The Sympathizer."

In 2018, more than 1.4 million Vietnamese resided in the U.S., accounting for 3% of the nation's 44.5 million immigrants and representing the sixth-largest foreign-born group in the country, according to the World Bank. But American interest in Vietnam has also been promoted by tourism and the formal normalization of diplomatic relations in 1995.

Perhaps one of the most famous beneficiaries of rising foreign interest is Khue, born in 1949, who enlisted at 16 in North Vietnam's People's Army and served as a war correspondent for the Communist Party newspaper Tien Phong during what most Vietnamese call "the American War." She was recently awarded a Lifetime Literature Award by the Hanoi Writers Association.

"I have always wanted to write," Khue says, "and as a young woman, I found solace in our folk tales, where we first learned to embrace the virtues of truth, kindness and beauty. But of course, all these beliefs were deeply challenged during the American War."

For both Khue and the postwar generation of writers, the impact of commercialization has led to success and international fame that would have been unimaginable a generation ago. For them, globalization has translated into a rise in domestic and international readers that reinforces and explores Vietnam's cultural identity amid the tumult of change and modernization.

James Borton writes about Vietnam and is a non-resident fellow at the Center for Sea and Islands Studies in Hanoi.