Indians go back to future via board games

Modern games lose their monopoly amid a resurgence of traditional pastimes The Indian game of kattam vilaiyattu is similar to the Western game of tic-tac-toe. (Courtesy of Kreeda Games)
CHARUKESI RAMADURAIApril 13, 2022 11:00 JST | India
CopyCopied

What do you give to children who have almost everything? This was my quandary every time my cousins came to India for holidays from the U.S., bringing children who had grown up with the latest and shiniest toys and games. Then I discovered an intriguing website which opened up a world of nearly forgotten games from my childhood, and gave me exciting new gift options.

Seeing games like chaupad (similar to Ludo), parama padam (snakes and ladders) and aadu puli aatam (goats and tigers) took me back to scorching summer days during my childhood in Chennai, when it was too hot to step outside and my friends and I spent hours playing these games indoors.

I even remember mock fighting with my grandmother over pallankuzhi (mancala), using cleaned tamarind seeds as playing tokens. Vinita Sidhartha, who founded Kreeda Games to revive and market traditional board games, says she was inspired by seeing her young children playing daya kattam, another Ludo-like game, and parama padam with her grandmother. "I loved the fact that these simple games were able to bridge that huge age gap," she says.

Over time, newly designed Western games such as Scrabble and Monopoly and cheap Chinese toys took over the store shelves, displacing board games that generations of Indians had played, often using homemade, hand-drawn panels on floors and tabletops. Later, more elaborate games such as Settlers of Catan and Labyrinth made their way into the market, attracting children and adults alike.

I was delighted to find my old favorites in Kreeda's modern collection. With bright reds and yellows printed on white cloth, and polished wood and stones, they were a visual delight. Other games such as dahdi, known in the West as nine men's morris, and ashta chamma, played in northern India as chowka bara, were new to me, although they have been around for centuries. 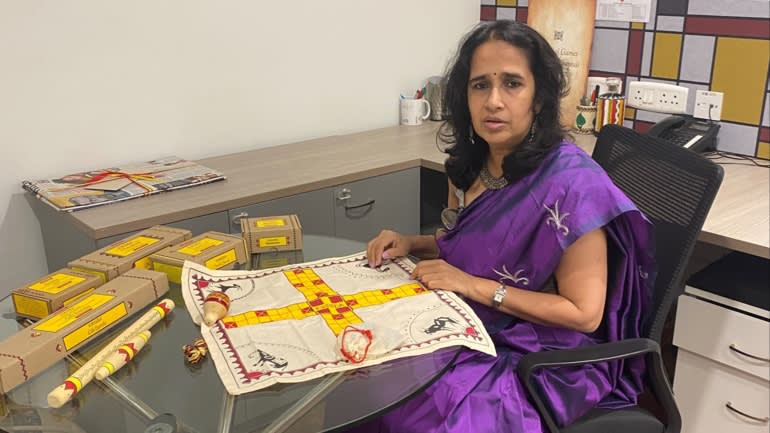 In fact, chaupad, a game of dice involving luck and strategy in equal measure, is mentioned in the Mahabharata, one of India's ancient epics. It was the game played between the feuding cousins Pandavas and Kauravas, which the former lost, eventually leading to a great war. Mancala is believed to be one of the world's oldest two-player games, and I have come across sets in my travels in Kenya and Zambia. I was also once given an exquisite mancala board from Indonesia painted in batik design.

Like some other games, mancala has largely faded from urban memory in India. But Kreeda is leading a renaissance of traditional games. Sidhartha says that people of her generation are nostalgic about such games, but do not know where to find them. She has also discovered that many young Indians want to know more about their roots and traditions.

"I wanted to get people back to playing these old games that have been part of our culture," she says. In her research, she found echoes in the most unexpected places -- from etchings of dahdi on temple floors in Tamil Nadu to posh women at club lunches excitedly explaining their favorite form of kalanay belanay (white elephant, black elephant). 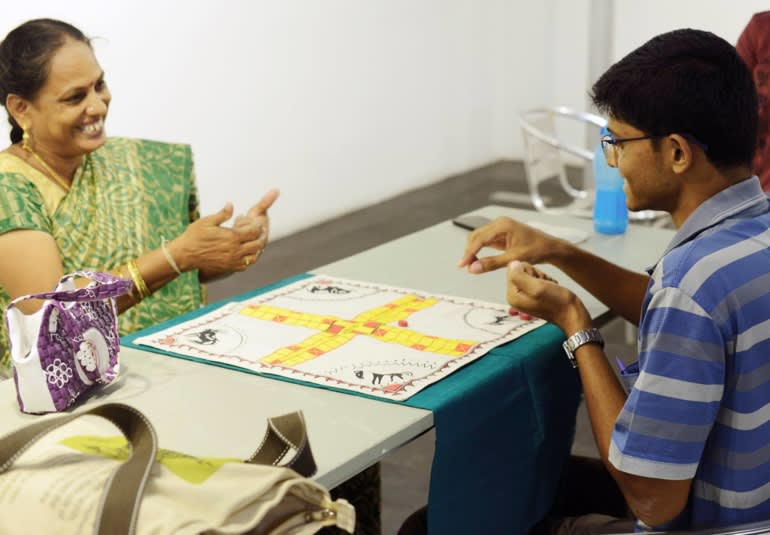 Chaupad, an Indian version of Ludo. (Courtesy of Kreeda Games)

Kreeda has plenty of competitors -- the best known are probably Kavade and Pachisi -- some of which make games printed or embroidered on fabric, sometimes using sustainable materials, and often with the help of local artisans. Creators have also introduced local twists, such as Pachisi's Chalti Gaadi, where the design motif is Indian roads, with all their quirky signage and endless obstructions. Both Kavade and Kreeda have colorful versions of bambaram (spinning top) and goli (marbles), once found in the hands of every child, rich or poor.

Apart from reviving old games, Kreeda has fashioned new ones such as its Ramayana trilogy, based on another ancient Indian text, which aims to teach children about the epic in a "fun, organic manner." Memories of Madras, on the other hand, is loaded with information on the city (now known as Chennai), because, as its makers put it: "We don't know the history of the city we live in, the buildings we drive past every day, the inside stories of landmarks."

Many of those behind the new wave of board games believe in their power to educate and tell stories, as well as to entertain. "Ours is perhaps the last generation of people who grew up with such games as distractions, before television and then computers came along," Sidhartha says. "If we don't document them now, and get younger generations interested, they will be lost forever."

Finding traditional games is no longer difficult -- my internet search threw up a stunning choice, many made with colorful, sustainable, eco-friendly materials. If nothing else, this is an indicator that pioneers like Kreeda have succeeded in their mission.

Charukesi Ramadurai is an Indian journalist currently based in Kuala Lumpur.