With election looming, campaign is focused on religion, not citizens' needs 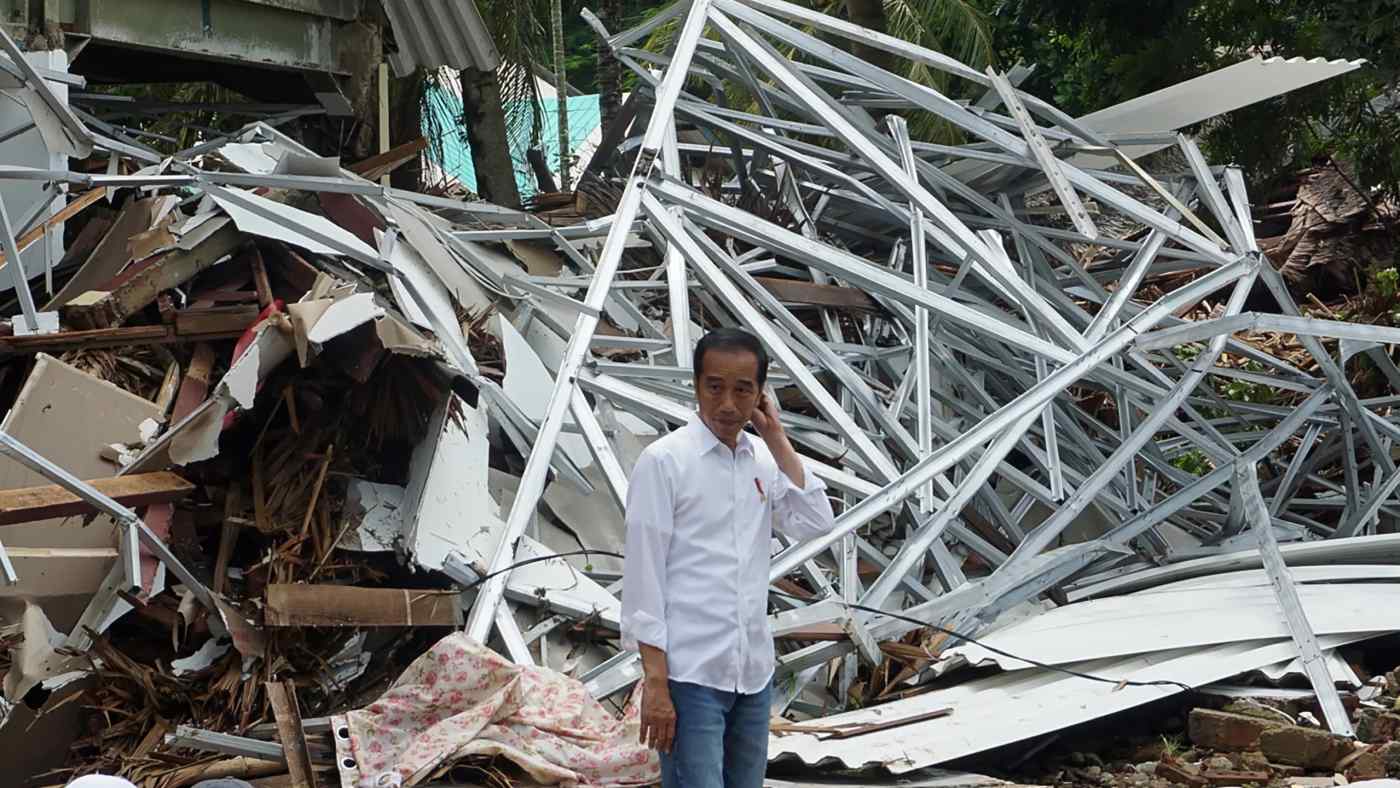 Indonesian President Joko Widodo stands near the collapsed Hotel Mutiara Carita after it was hit by a tsunami in Pandeglang, Indonesia, on Dec. 24. (Photo by Antara Foto/Bayu Prasetyo via Reuters)
MICHAEL VATIKIOTISJanuary 16, 2019 09:30 JST | Indonesia
CopyCopied

A few weeks after the devastating tsunami hit the coast of Aceh in Sumatra in December 2004, I visited Meulaboh, one of the worst-hit coastal towns. It was as if the area had been carpet-bombed: 221,000 people died in the province already ravaged by war.

A decade later, I visited the Tsunami Museum, the entrance to which is designed around a high wall of dark stone -- symbolizing the wall of water that  for many victims was the last thing they saw.

The striking thing for me was how much care and attention was paid to the memory of this tragedy in a country where so often, the tragic past is carelessly discarded. The museum is also testament to the massive $7 billion effort mounted by the government and international donors to rebuild and rehabilitate Aceh.

Perched along the Pacific Ring of Fire, Indonesia bears the brunt of frequent seismic disasters. The toll in 2018 was particularly heavy at 4,000 fatalities or more from successive earthquakes in Lombok, a tsunami in Palu in central Sulawesi, followed by another in the west coast of Java.

You would think these tragedies would spur the government to do more to protect its citizens, especially since a tsunami warning system installed over a decade ago had failed.  All the more so since 2019 is an election year.

Yet there is no sign of such action in election campaigns underway. Neither incumbent President Joko Widodo nor his challenger Prabowo Subianto have promised better protection from natural disasters.

This is even more surprising because Jokowi, as the president is fondly known, has built his presidency on infrastructure development. He seems more preoccupied with the completion of a highway across Java and a metro system under Jakarta than fixing the network of buoys and tidal gauges that were installed after the 2004 disaster.

The national disaster agency responsible for installing and maintaining the system is woefully underfunded and poorly led, critics say. Of the 1,000 warning sirens needed, less than 60 are in place. One estimate for replacing the entire warning system comes close to the agency's entire budget of $500 million.

It's not simply a matter of economic growth or revenue. Rather, it's the lack of concern for grassroots needs that highlights the shortcomings of representative democracy in Indonesia. Free and fair elections are regularly held and peaceful transfer of leadership is now routine, yet none of the contesting political parties nor their candidates do more than pay lip service to the real needs of ordinary Indonesians.

Apart from bearing the lethal costs of inadequate disaster protection, Indonesians pay more for rice, fresh beef and other staples than others in Southeast Asia. The World Bank says children in many urban areas in the country are malnourished. Basic healthcare and education remain poorly funded.

None of these basic needs are central to politicians' campaigns. Instead, they are fixated on religion. While Jokowi's campaign mentions priorities such as human development and equality, a close read finds an emphasis on religious education as a provider of "national character," the promotion of religious entrepreneurs and the ease of the Islamic "Zakat" tax to address inequality.

One explanation is that Indonesian politics is personality-driven; political parties don't generally have sweeping programs aimed at improving society and the lives of ordinary people. Instead, they provide vehicles for competing members of the elite. In a Muslim majority country, one of the surest ways to draw support -- as well as undermine your opponent -- is to play on religious matters.

To fend off attacks from increasingly vociferous Islamic conservatives, Jokowi enlisted as his running mate an aging Muslim cleric Ma'ruf Amin. As a result, much of the campaign discourse has ranged over topics such as the need for leaders to have good knowledge of the Quran.

The failure to consider citizens' needs, particularly those who have suffered or feel deprived, is dangerous as it can help breed extremism. Conservative Islamic movements are building a strong support base on the back of social and economic discontent.

As the people of Palu try to rebuild their lives, an Indonesian analyst suggested that a group known as East Indonesia Mujahiddin had expanded its membership in the area.

Many like myself who witnessed the aftermath of the 2004 tsunami were hoping for the same rapid response in Palu, the welcoming of international aid and assistance, and subsequent rehabilitation efforts. Sadly, Indonesia was a different country in 2004 - a president freshly installed by the first direct election, eager to demonstrate Indonesia's openness and engagement with the world.

Today, much of this openness has been supplanted by narrow-minded petty nationalism and conservatism. The world rushed to offer aid and assistance in Palu. The government hesitated and then rejected most of them. The president did find time -- even as the recovery effort was struggling and he rebuffed help from other sources, including from a nearby British naval vessel -- to thank the Kingdom of Saudi Arabia for its generous aid, a nod to the conservative Islamic lobby he needs to keep onside to secure his re-election.

Michael Vatikiotis is Asia director of the Centre for Humanitarian Dialogue and a former editor of the Far Eastern Economic Review. His most recent book is "Blood and Silk: Power and Conflict in Modern Southeast Asia."