One day back in 2017 I was gazing from a high point on Singapore's Clementi Avenue at a nearby construction site, where a remarkable thing was happening.

Rising out of the ground was a partly-built condominium complex of twin, 40-story residential towers.

The striking aspect was that the towers weren't being built on the site, but were being constructed in a factory, off-site, and arriving by truck, segment by segment. As the fully-fitted modules arrived, they were being stacked one on top of another, like a Lego set, locking into place with a peg-and-socket system.

Two German tower cranes, the most advanced of their kind and the heaviest lifters ever to arrive in Singapore, were handling the concrete modules, each weighing between 17 and 29 tons. It took just a year for all 1,866 individual modules to be slotted into place, and a further year to complete the project and landscaping. The first occupants of what is named Clement Canopy are now about to move in.

This innovative building method is known as PPVC, or Prefabricated Pre-finished Volumetric Construction. There are different forms of PPVC, with some using steel and others a hybrid of materials. Clement Canopy is the world's largest project so far to use all-concrete modules. Whatever the material, they all offer the advantage of transferring construction activity to a factory-controlled environment away from the building site.

Construction is a significant source of pollution, generating high levels of dust from concrete, cement, bricks and stone -- particularly in fast-growing cities of Asia. As the particulates are typically less than 10 microns in diameter, they can linger in the air and carry for long distances, penetrating deeply into the lungs and causing respiratory illnesses.

Particulates from the diesel engines of delivery trucks and construction equipment, and noxious vapors from paint, glue, plastics and chemicals all add to this poisonous miasma. Pollution enters the soil and the drainage system through water runoff, working its way into aquifers, rivers and oceans.

Construction is also a big user of unskilled and semi-skilled labor, and countries that lack indigenous workers to fill these jobs have to import huge numbers of foreign laborers from low-cost countries. Singapore has long suffered from this problem, and several years ago initiated a policy of adopting high-technology equipment to improve quality and productivity.

The road to PPVC, then, becomes a logical one. The downside is that enormous investment is required upfront in building and equipping factories to produce fully-fitted modules, and in preplanning by architects, engineers and the contractor.

Precision equipment is needed in the factory, which has a high degree of automation, and also on the site. Placement of the modules at Clement Canopy, for example, required accuracy of plus or minus 2 mm, for any greater discrepancy could have led to serious misalignment further up the structure.

Building-in smart technology also becomes easier: Clement Canopy comes pre-installed with smart air-con and digital locks, and in a first for Singapore, has a single app to manage the common areas and facilities such as the intercom, tennis court and clubhouse.

For Dragages Singapore, the Clement Canopy contractor, the investment has clearly been worthwhile, for last year the company started its sixth PPVC project in Singapore. Once you have that upfront investment in place, it all becomes cheaper. And with a Singapore government edict for use of PPVC in selected zones, and with other suppliers and contractors already licensed, PPVC will be increasingly seen on the island.

Another revolutionary development for potential homeowners as well as the construction industry is the emergence of 3D printed homes.

3D construction printing, or 3DCP, has been around for several years, for building elements and components. The University of South Carolina built the first 3D printed concrete wall in 2004, although progress was initially slow, the construction industry being notoriously risk averse. 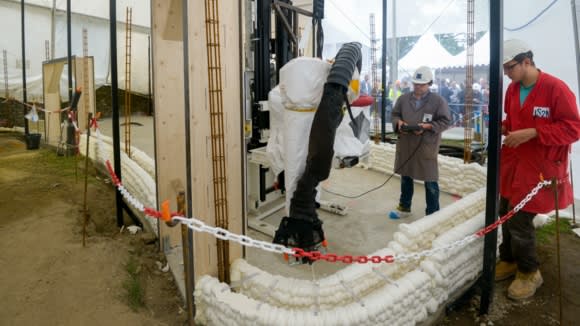 The first house being printed by the University of Nantes and Nantes Metropole, in Nantes, France (Photo by Valery Joncheray/Nantes Metropole Habitat)

But enormous progress has been made in the past few years, as a rapidly growing number of startup businesses have invested in different forms of 3DCP technology. The world's first 3D-printed pedestrian bridge was installed in a park in Madrid a little over two years ago. Printed houses, in the actuality rather than demonstration models, began to appear about 18 months ago. A family in Nantes, France became the first to move into a fully 3D-printed house, a four-bedroom property that took 54 hours to print, in July of last year.

Robot printers reduce the amount of construction waste, as everything is computer controlled. Unskilled labor is almost entirely eliminated. Further, as the printers can work silently night and day, building times are reduced. The University of Nantes, which was responsible for the first printed house in the city, says a house that would usually take two weeks to build can now be completed in three or four days.

In a field that is producing some fantastical equipment and building designs, a surprising leader to have emerged is Shanghai-based Winsun.

Winsun has launched a series of eye-catching initiatives, building houses for sale in China, designing printers that can turn out 10 houses in a day, printing out bus shelters, and printing public toilets that have been installed in several provinces and in Hainan Museum.

In addition to minimizing its own dust and materials waste, Winsun's technology utilizes other construction waste and mine tailings in its printing "ink", thereby clearing up existing debris, rather than having it dumped.

Given the amount of investment going into this sector by so many companies with different concepts, given the cost and labor savings, and given the environmental advantages, there is a big future for 3DCP. Even NASA is actively working with suppliers to build the first houses on the moon. It will, however, be quite a while before you can move into one of those -- best, perhaps, to opt for a Lego-style abode.

Ken Barrett is a Bangkok-based author and architecture expert.