Traditional body art is making a comeback among Polynesian immigrants The sprawling suburbs of Sydney, Australia's biggest city, are home to successive waves of immigrants. In the city's south-west, Cabramatta High School, next to an area known as Little Saigon, has turned generations of their children into Aussies.

It takes a flexible breed of teacher to fit into this diverse student community, but Brent Kerehona stands out as an example of why ethnic heritage does not have to be abandoned for these children to thrive in the Australian mainstream.

Kerehona, 45, whose family emigrated from New Zealand, joined the Australian army after leaving school. He served as a paratrooper and as a military policeman before returning to civilian life to attain a master's degree. He now teaches history, geography and Pacific studies at Cabramatta High.

Despite his "action man" background and his robust appearance, Kerehona comes across as a highly reflective man in conversation.

In his transition from the military life Kerehona started thinking about his Maori ancestry across the Tasman Sea in neighboring New Zealand, where Maoris, the country's indigenous Polynesian inhabitants, make up about 15% of the population, according to the New Zealand government.

Maoris have been migrating to Australia since at least 1793, five years after the U.K. began the European colonization of Australia by establishing a penal colony in Sydney. By 2016 the country was host to 142,000 people with Maori ancestry, according to New Zealand's Ministry for Culture and Heritage.

Like immigrants from elsewhere, most have merged into the Australian mainstream. But Kerehona is one of many trying to reconnect with Maoritanga (Maori culture) by adopting the permanent facial and body markings known as ta moko (traditional tattooing). 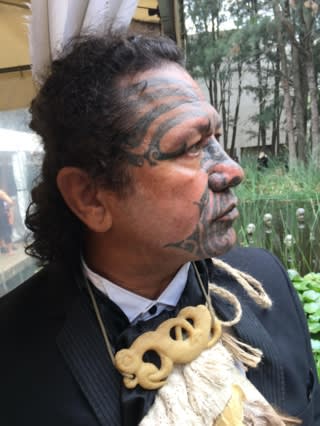 The revival of interest in ta moko began in New Zealand in the 1980s as the country dealt with a surge in Maori claims to land and resources based on the Waitangi Treaty, its founding document, which was signed in 1840 by British representatives and about 540 Maori rangatira (chiefs).

Europeans discovered the Pacific form of body marking in voyages to Polynesia starting in the 16th century, with tatau, the local name for the practice, eventually emerging in English as "tattoo." The much-evolved Maori variant was officially noted by Europeans in 1768-71 during the an exploratory voyage by the British sea captain James Cook. .

However, preserved Maori toimoko (heads) with elaborate markings were already part of an early souvenir trade. In precolonial times, Maori communities had preserved the heads of their rangatira chiefs as a way of retaining some of their power. When casualties in tribal fighting increased with the use of muskets in the early 19th century, the heads of lesser figures were often traded with passing ships for guns and other commodities.

Back then, getting ta moko was not like going to a tattoo shop, choosing a design from a book, and getting it applied with a stencil and electric ink-machine. Each moko was individual and distinct, and the right to wear it had to be earned through valorous deeds, or inherited. When the chiefs came to sign the Waitangi Treaty, many copied part of their facial mokos as their signatures.

It was a painful and somewhat dangerous process. The moko artist cut the lines into the skin with chisels made of bone, leaving incised grooves and ridges marked with black, dark blue or dark green dye made from the soot of specific plants. Derek Lardelli, a Maori and ta moko scholar in Gisborne, New Zealand, said the degree of precision achieved by the artists would be hard to match today, even with modern tattoo machines, which use electric needles and inject only the surface layers of skin.

Tattoos were created by eye, in close rapport with the subjects, and without set patterns. The designs recall sweeping waves, curling fern fronds, the lines of whales and stories of ancestors. By the end of their lives, the rangatira chiefs came to resemble wood-carvings, like great ancient trees, Lardelli noted.

After organized British settlement began, ta moko faded as a cultural identifier, at least among men, although the practice of markings around the lips and chin survived among Maori women until the 1930s when it was replaced by cosmetics. By the late 1970s, ta moko were rare outside remote areas although some versions emerged as an identifier among Maori criminal gangs.

The 1980s comeback pioneered by Lardelli and others was a conscious effort to revive identity and respect, although the contemporary form uses tattoo machines and modern dyes. "It is acceptable for non-Maori to use some moko-like patterns," Lardelli said, noting that these machine-etched versions do not have whakapapa, the genealogy which links to Maori ancestry, and are termed kirituhi -- literally "drawings on skin."

Kerehona hung back from ta moko for a long time after his interest in Maori culture began to grow, but said he "felt it was the right time to take it on," after his post-army studies. He started with an elaborate pattern around his mouth and chin, followed by spirals on the bridge and nostrils of his nose and sweeping arcs across his forehead. Earlier this year he became part of an exhibition of ta moko at the National Gallery of Australia.

In a public demonstration, renowned expert Turumakina Duley added double-spirals and other highly-intricate designs on Kerehona's cheeks and temples, markings that represented his whakapapa as well as his social standing within the community. In late July he revisited the gallery to have even more moko incised.

Many art museums have shown live exhibits to illustrate specific topics, including body paintings applied to people, but the National Gallery, located in Canberra, may be unique in imposing permanent cultural changes on the bodies of its models."Moko is very different from tattoos," said Crispin Howarth, the gallery's curator of Pacific art. "It is wearing Maori identity on your face."

Ta moko sometimes prompt adverse reactions among New Zealanders of European extraction, who are known as pakeha. "There, it's been seen as a challenge, as a rebellious act," Kerehona said. "But that's starting to change. It's become more positive." In Australia, he said, ta moko are not seen as threatening. As for the teenagers at Cabramatta High: "They love it."

Hamish McDonald is a Sydney-based writer.