Insults are okay, but sexism and bigotry are not, language campaigners say 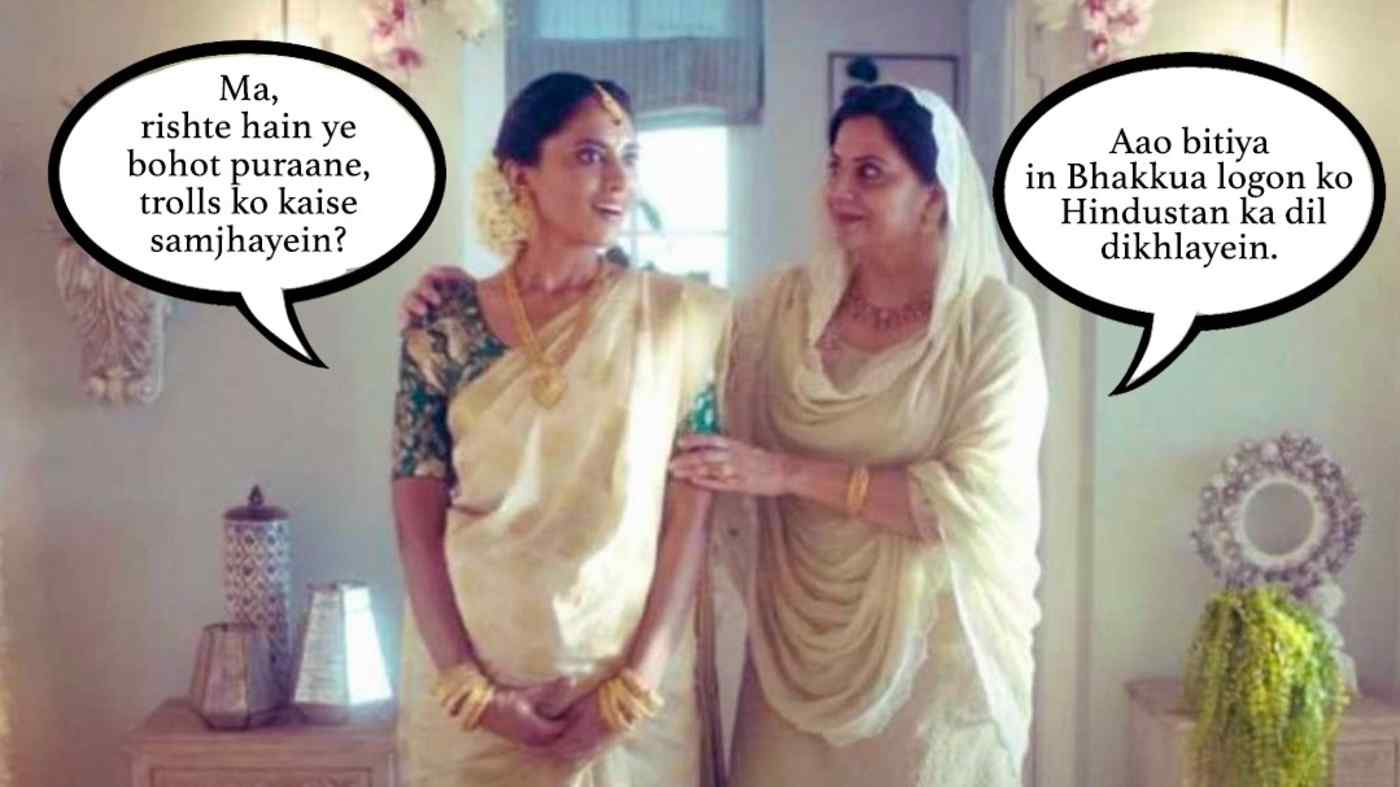 A conversation between a mother and daughter about online trolls who are "Bhakkua" meaning Supreme Fool. (All photos courtesy of The Gaali Project)
Charukesi RamaduraiJune 16, 2021 11:14 JST | India
CopyCopied

For Tamanna Mishra and Neha Thakur, friends who grew up in India, the proliferation of misogynistic swearwords always felt like a slap on the face. They noticed with rising dismay how some viewing platforms in India have been normalizing the use of swearwords with stories of violence from the hinterlands. In parallel, the apparent anonymity provided by social media was fueling a brutal backlash, complete with threats and insults, against women who voiced their opposition. 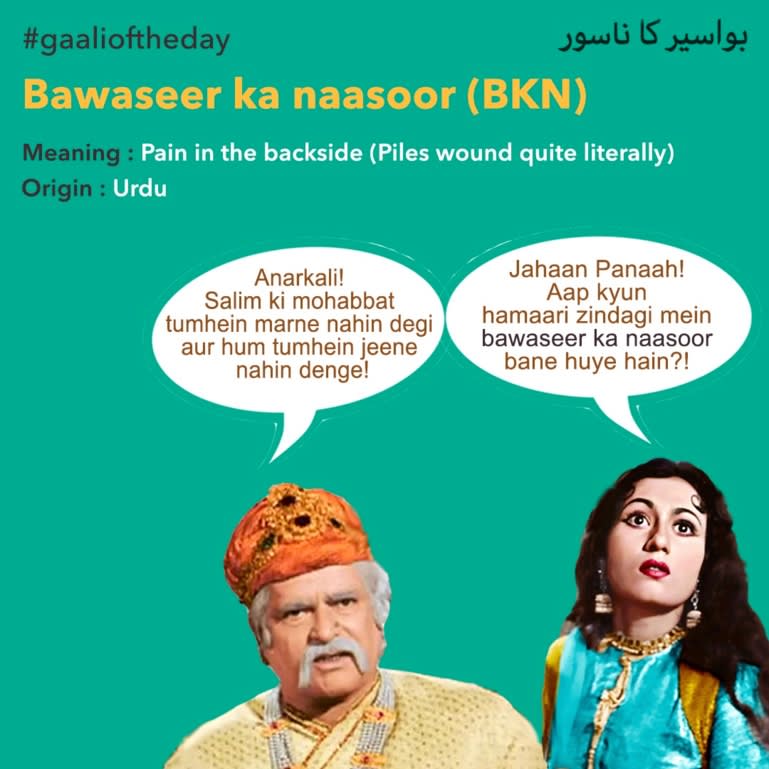 Emperor Akbar is asked by his son Salim's lover Anarkali why he is being a "Bawaseer ka naasoor" meaning a pain in the wrong places.

As urban professional women in their 30s -- Mishra is a public relations professional in Bangalore and Thakur an Airbnb host in Mumbai -- they knew that swearing is a natural response to stress and exasperation. But they found it unacceptable that most local swear words are degrading to women, or to specific Indian castes and communities. "There are so many frustrating things to deal with on a daily basis, so we knew that not swearing is not an option for most of us. But even when two men fight, their language is so misogynistic," says Mishra. 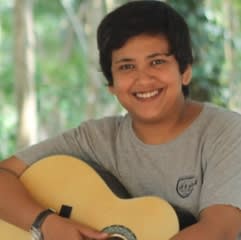 Neha Thakur, an Airbnb host in Mumbai, set up The Gaali Project -- from the Hindi word gaali "insult" -- with the aim of persuading Indians to "swear, but with love" with her friend Tamanna Mishra, a public relations professional in Bangalore.

In September, the friends set up The Gaali Project -- from the Hindi word gaali (insult) -- with the aim of persuading Indians to gaali, magar pyaar se ("swear, but with love"). A call to friends and family via the internet, amplified by a social media campaign, produced a torrent of words and phrases that respondents thought were funny or scathing without being offensive. The project now has a collection of more than 1,500 crowdsourced words from more than 20 Indian languages.

The process is not completely straightforward, however, since many suggestions turn out to be unintentionally sexist or bigoted. "We find that two out of every 10 exhibit some kind of bias or the other. And the worst thing is, we use such phrases all the time without really thinking about the meaning," says Mishra. "We have been discovering slang that is so evocative," Mishra says.

The Gaali Project believes it is possible to exclaim in annoyance or trade insults with phrases that pack a verbal punch but are not profane. For example, says Mishra, the term lah bong is used as a meaningless exclamation in the Khasi language in India's northeast to express frustration. Another favorite from the Kashmiri language is aab dabbe, meaning a box made of water, which is used to describe a person without substance. "We have been discovering slang that is so evocative," Mishra says with delight. Other phrases include akal ke dushman (Hindi, meaning enemy of intelligence) and kaahil wajood (Urdu, signifying a useless existence).

The friends have been sharing these discoveries through their website (www.sites.google.com/thestorytellers.io/thegaaliproject) and via social media. The idea is to get the word out -- in a manner of speaking -- as widely as possible, even providing people with options when they are searching mentally for a gaali. This works especially well in the digital world, where saying "launch the gaali project" to Alexa, Amazon's artificial intelligence device, brings up more than 20 suitably vetted gaali words.

Not everyone is a fan though. Mishra says many people argue that the project's mild alternatives to swearwords just don't "give the same feel." This is understandable, given that the psychology of swearing has been proven to relieve pain and stress. Steven Pinker, a cognitive psychologist and author of "The Stuff of Thought: Language as a Window Into Human Nature," says that swearing taps into the primal part of the brain and can be cathartic (for the giver; what it does to the receiver is another story). Others seem to feel like the English writer and comedian Stephen Fry, who once told the BBC that swearing is important to him, adding, "It would be impossible to imagine going through life without swearing, and without enjoying swearing."

Personally, I get this. My own first reaction to a situation of stress, disbelief, helplessness or even unexpected joy is to swear loudly, and without any thought of political correctness. It helps me to express my feeling in a way that no polite phrase can. It is only after the initial rush of emotion subsides that rational thought takes over. Still, Mishra and Thakur believe that it is possible to change people's thinking slowly and steadily by spreading awareness of alternatives. As Mishra says, "Even if we can't change behavior altogether, we want people to be mindful of how they use cuss words."

She ends our chat by suggesting that using these gentle swear words can help to break the ice in new or delicate situations such as making new friends. In this chaotic, often violent world, that could help to ease strain and build bonds. Even more important, though, The Gaali Project says it wants to help Indians learn to express frustration without losing grace, and without being hateful. As the project's website says, "Think baklol (stupid person), not rape threats." Now that has to be a good idea.