Isolation is a bad joke in the teeming subcontinent, but a sense of humor helps 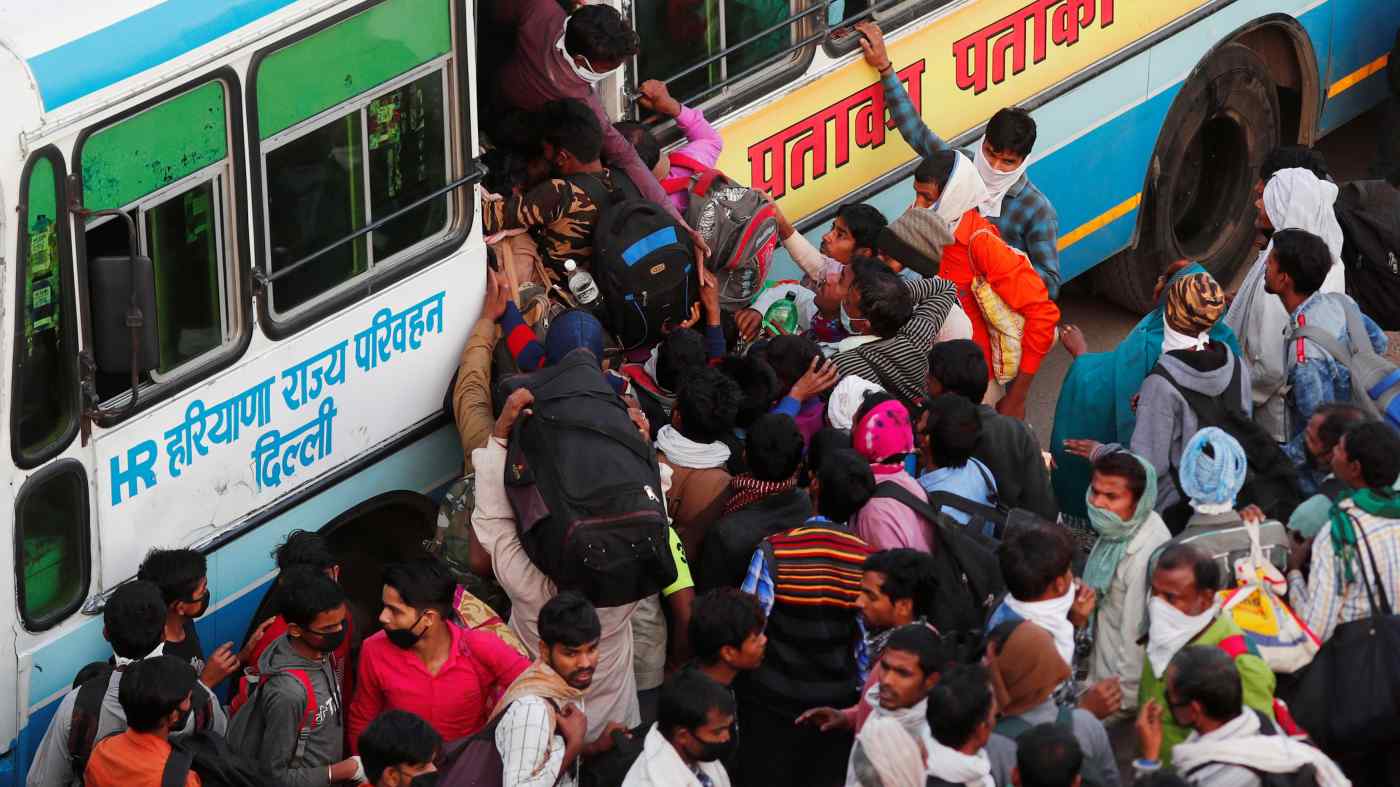 Migrant workers try to board a crowded bus as they return to their villages, during a 21-day nationwide lockdown to limit the spreading of COVID-19, in Ghaziabad, on March 29   © Reuters
NEETA LALApril 15, 2020 11:43 JST | India
CopyCopied

The term “social distancing” seems to have become the battle-cry of the global fight against the COVID-19 virus. But in India, currently in the midst of the biggest lockdown in history with 1.3 billion people ordered to stay home, isolation seems like a cruel joke.

Believe me, it’s tough. Indians are by nature tactile creatures -- touchy, feely, curious. We’re used to having people breathing down our backs all the time -- in queues, waiting to get off buses, disembarking from airplanes.

It’s normal for people to stand next to me in mall elevators checking out my shopping bags. My toes are stubbed mercilessly in cinemas by popcorn-laden customers passing brusquely through the narrow aisles. And don’t get me started on how many times people sitting next to me on trains, buses and metros have peeped at my text messages. One young woman even had the temerity to suggest how I should frame a response.

Getting out of an elevator in India requires the skill of an Olympic athlete. No sooner do the doors slide open than all hell breaks loose. Everyone scrambles to get in and out at the same time. Ditto for buses. And watching Indians traveling by air is the stuff of memes. Aircraft barely hit the tarmac before passengers start lunging for overhead lockers.

In wealthier nations, social distancing is a choice most people can make. But in India it is an unimaginable luxury. In some areas, our streets are so narrow that it’s impossible not to brush against other pedestrians. Village women walk tens of kilometers in groups to fetch water in containers perched precariously on their heads. There is only one toilet per 1,440 people in Dharavi, Mumbai, which is Asia’s largest slum. Nearly 78% of community toilets in Mumbai's slums lack a water supply, according to a 2019 Greater Mumbai Municipal Corporation survey.

How do you enforce self-isolation in such circumstances? Chaos is unfolding across India, especially in the slums, where 74 million people jostle cheek by jowl.

The lockdown has also forced migrant laborers who depend on daily wages to flee to their villages, mostly on foot. Bereft of homes and savings in the cities, without transport options and unassisted -- despite promises -- by the government, they have pedestrianized highways in a mass-mobilization in which millions trudge hundreds of kilometers.

About 80% of India’s 470 million workers are in the informal sector, unprotected by labor laws and social safety nets. Many are manual laborers in the fields, factories and streets. The lockdown has thrown their lives into disarray. How, for instance, can a ragpicker or street vendor who lives hand to mouth in the open practice social distancing? More importantly, can there be social distancing without social security?

But we’re trying. India is devising innovative ways to maintain isolation. Grocery stores have marked 1.82 meter circles with white chalk to space out customers. Even roadside vegetable vendors are marking spots for their buyers. Some grocers are using plastic pipes to put food grains and pulses into buyers’ bags in order to maintain distance. And a video of a woman picking up a newspaper outside her door with tongs has gone viral.

In Kolkata State, Chief Minister Mamata Banerjee visited a local flower market and drew circles with bricks and chalk to mark “safe” spaces for buyers to stand in. In a video of her visit Banerjee erases the circles, saying "aita hobe na" (“this won't do”) as she draws new ones on the ground.

Government mass-sensitization campaigns for COVID-19 have recruited popular Bollywood film stars to get their messages across. Iconic movie posters from vintage classics have been reimagined to reinforce the threat from the virus and the need to follow precautions. Police can be seen wearing masks which mimic the spiky coronavirus shape. Some are even attired as Yamaraj, the Hindu god of death, to underscore the frailty of human life.

In the midst of all this ballyhoo, India’s Twitterati has found a Hindi moniker for social distancing -- “Tan-Doori.” “Tan” means “body” and “Doori” means “distance.” It’s a clever spin on India’s famous tandoori cuisine.

Sense of humor. It’s going to be an important weapon in these unfunny times.

Neeta Lal is a Delhi-based writer.