When comfort food is no longer a refuge 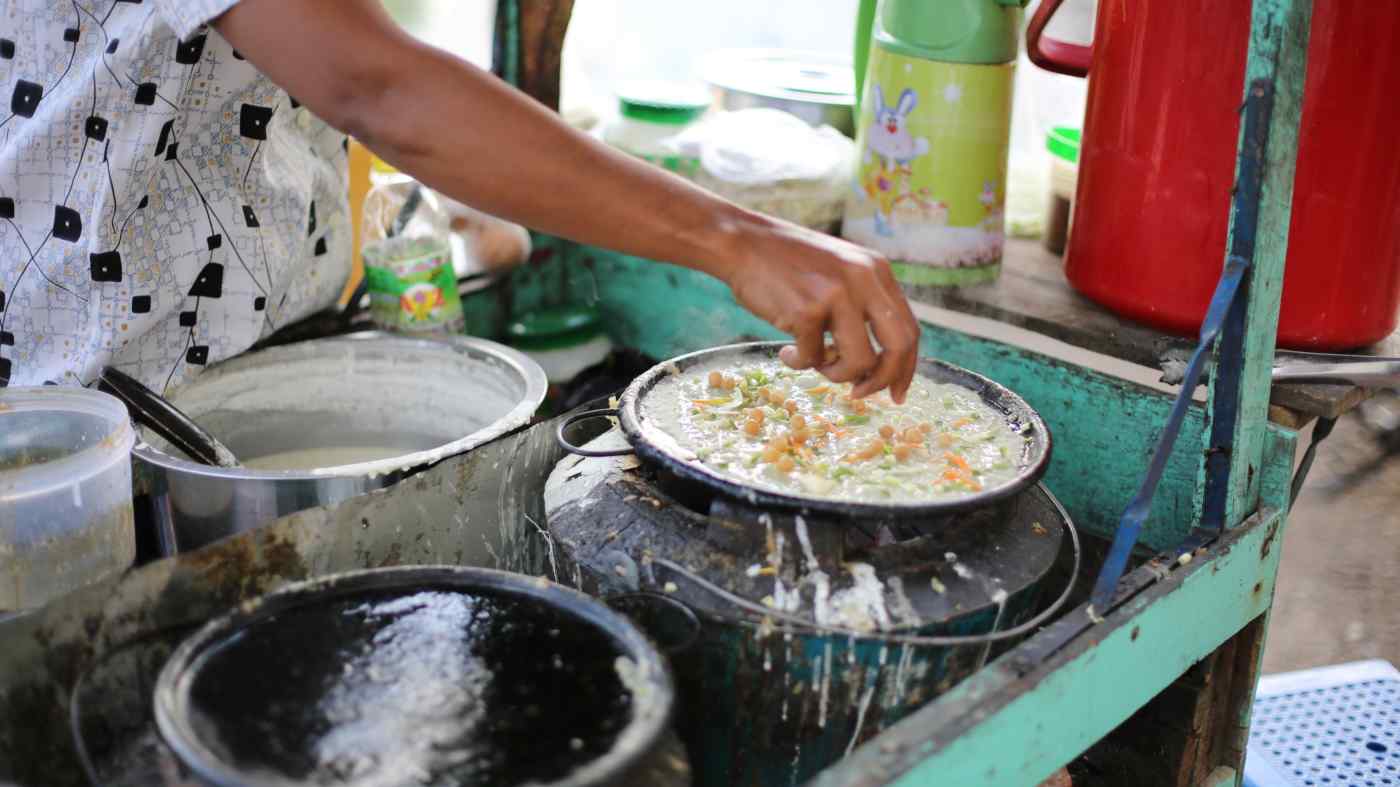 Yay-mont is a savory pancake made with rice flour and filled with tomatoes and spring onions. (Photo by Kelly Mcnamara)
Thin Lei WinJune 2, 2021 11:12 JST | Myanmar
CopyCopied

Laphet thote, (pickled tea leaf salad) is a distinctively versatile dish that graces most dining tables in Myanmar. It can be a savory snack, a filling meal when paired with a bowl of fluffy white rice, or a palate-cleansing dessert taken with cups of freshly brewed Chinese tea.

It is also the first dish I learned to make when I left home, because there is practically no cooking involved. Just mix the pickled tea leaves -- they came in various types but I usually go for chin sat (sour spicy) -- with a kyaw -- crispy bits that include fried garlic, broad beans and yellow split peas, roasted peanuts and sesame seeds. A dash of oil, a splash of fish sauce, a squeeze of lime and lunch is ready.

Laphet thote has "huge political, religious and cultural significance in Myanmar," says MiMi Aye, author of the award-winning cookbook "Mandalay." "It was considered a peace offering between warring kingdoms, it was eaten to signify acceptance of court judgments in precolonial times ... and it's served to guests at weddings (including my own)." 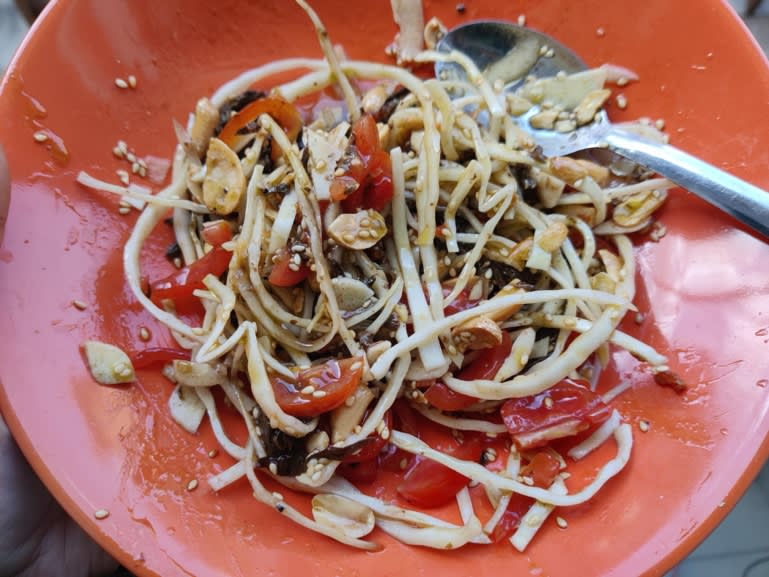 Laphet thote, pickled tea leaf salad, is a distinctively versatile dish that graces most dining tables in Myanmar. This is the author’s improvised version. (Photo by Thin Lei Win)

With all this in mind I turned to laphet thote in my European kitchen when I desperately needed a break from writing, reading and speaking nonstop about what's happening back home in Myanmar, where the Feb. 1 coup dragged the country back decades in a few blood-soaked weeks.

Alas, two large, precious bags of a kyaw had gone off. I had hoped they would be sufficient to see me through the emergency, because I knew it would be difficult to get more. (Late last year, I contacted a Myanmar food shop in London and was told that COVID-19-related flight restrictions meant they had run out of both laphet thote and a kyaw. The situation only worsened after the coup as the junta further curtailed flights.)

In desperation, I threw a handful of the greasy crispy things into a bowl -- and had to abandon it after two bites. I was devastated. My inedible laphet thote felt like a metaphor for the country and the food I love slipping away from me. It is a privilege to be safe at a time when millions of my fellow citizens live in fear, but safety comes with a gut-wrenching feeling of impotence and survivor's guilt.

Very often, food has served as a salve for bruises to my soul. Some of my fondest childhood memories revolve around eating with family and friends, particularly the ceremonies at home where preparations started a day or two in advance, and guests turned up throughout the day to eat and catch up.

Now, I don't know when -- or if -- I will see those people again, let alone share a plate of laphet thote. When will I again enjoy food from the Myanmar street carts and hole-in-the-wall restaurants that have nourished both my body and spirit through the years? When will I experience again that familiar sense of community that turns roads and buildings into friendly faces, delicious aromas and heartening tastes?

There used to be a lady who served steaming bowls of mohinga (Myanmar's national dish of lemongrass-laced fish noodle soup) at the corner of Seikkantha and Anawrahta streets in Yangon. I often bought two servings on the way to work, and had them as breakfast at my desk while scrolling through emails. For lunch, I would cross Anawrahta to reach a small panthay (Chinese-Muslim) restaurant that offered a spectacular version of baked rice in a thick gravy full of vegetables and chunks of chicken. 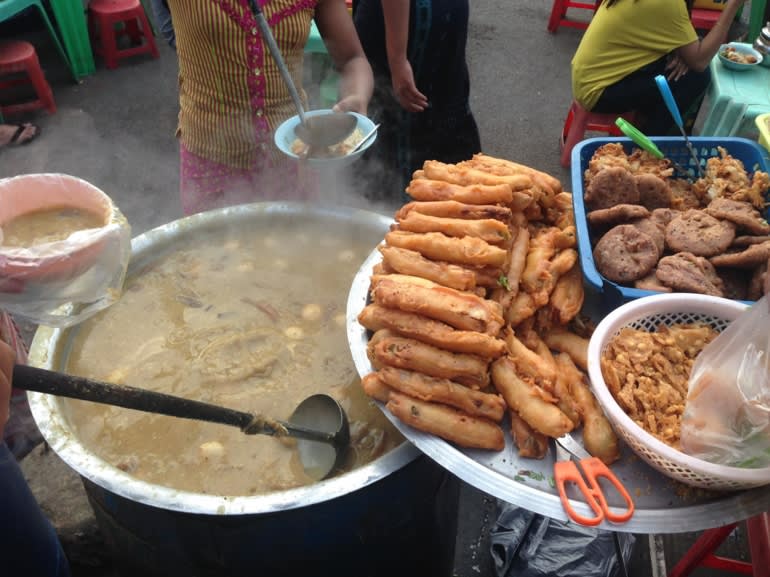 Mohinga is Myanmar’s national dish of lemongrass-laced fish noodle soup. I often bought two servings on the way to work, and had them as breakfast at my desk. (Photo by Thin Lei Win)

On cool evenings, I would convince a couple of loved ones to accompany me to the vendor who sat near the gate of Kabar Aye Pagoda with her bubbling pot of wet thar dote htoe (literally, pork on a stick) and we would compare how many sticks each of us could eat. No wonder I gained more than 4kg that year.

I think of the many women from whom we would buy pae pyote (boiled peas) and slices of floppy naan bread each week. They usually delivered their wares in the early hours, so I rarely met them, but I knew I was in for a treat when I woke to the smell of reheated naan.

There were also the people I had met and eaten with in the extraordinary year I travelled with my co-author Kelly Macnamara to gather stories for The Kite Tales, our website documenting the memories of ordinary people. I remember a small street cart in Loikaw, Kayah State, where our noses led us to yay-mont, a savory pancake made with rice flour and filled with tomatoes and spring onions (chili optional but highly recommended). By late May the town was the scene of shocking violence including rampant shootings of civilian protestors by military forces. And I will never forget the delicious chicken soup at a family-run cafe in Lashio, Shan State, where the proprietor spoke impeccable English, taught to him by a group of Italian nuns. 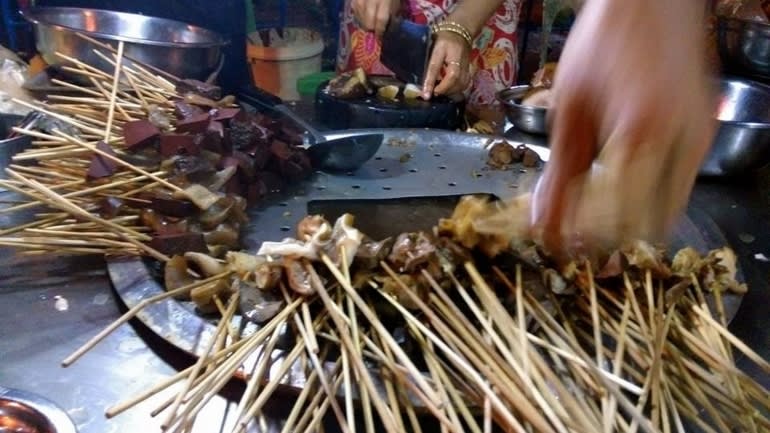 Wet thar dote htoe is, literally, pork on a stick. We would compare how many sticks each of us could eat. (Photo by Thin Lei Win)

Since the coup, I have often wondered about these people -- where they are and whether they and their families are safe. Most street food sellers live from hand-to-mouth, and even the owners of small restaurants rely on volume to keep their businesses afloat. How are they surviving, with the coup following in the wake of pandemic-related lockdowns?

Yet, their bravery has also been astounding, MiMi Aye reminds me, recalling a pickled-fruit vendor in Yangon who gave away her wares to protesters and was arrested for her kindness, and a Mandalay seller of wet thar dote htoe whose products were destroyed by soldiers after they were refused service.

MiMi Aye also says she has lost her appetite since the coup, but adds that "pounding away with a pestle and mortar and the occasional bout of angry chopping is quite therapeutic."

She also has this advice for me: "Necessity is the mother of invention. That goes for everything -- not just food -- but it means you can use, for example, habas fritas (salted broad beans), cashews and sunflower seeds instead of a kyaw" (for laphet thote)."

This is an apt suggestion for my country, too. The power-sharing deal between the military and civilian government that started in 2011 and collapsed in February has turned rancid, and the people have been robbed of a decent future. It is time for Myanmar to build a new, more inclusive political dish.

Thin Lei Win is a Myanmar journalist based in Europe.