Why tree-hugging should be taken seriously

Social distancing in response to the COVID-19 pandemic is preventing many of us from hugging friends and even loved ones. But some are seeking succor in trees. The Iceland forestry service, for instance, recommends that citizens embrace their forest friends daily for five minutes to whittle down stress.

"A walk in the woods is good for you, and it’s good for your morale during difficult times," says Throstur Eysteinsson, director of the Icelandic Forest Service. Forest rangers in the Hallormsstadur National Forest have been clearing snow-swathed paths to allow access.

Why making a trunk call should ease stress is not clear. But the author and entrepreneur Matthew Silverstone argues in his book “Blinded by Science” that trees vibrate in a way that has a positive impact on people suffering from issues such as attention deficit hyperactivity disorder, poor concentration, depression and headaches.

Silverstone, who turned to “alternative” healing after modern medicine failed to cure his child of chronic fatigue, found that tree-hugging yielded remarkably helpful results. His book intrigued me, so on a visit from my home in India to Vancouver, Canada, I decided to try it.

The location was Stanley Park, a glorious conglomeration of 400 hectares of forest, wetlands and beaches. Nearly 30 km of trails meander through evergreen glades peppered with richly diverse flora and fauna. Spruces, hemlocks, moss-dripped big-leaf maples and cathedral-like Douglas firs towering to 50 meters offered me an eclectic ensemble to choose from. 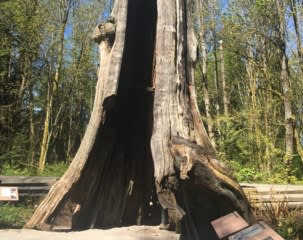 This 1,000-year-old western red cedar in Vancouver, Canada, is known as the “Hollow Tree.” Its gigantic open trunk has featured in many historic photographs. (Photo by Neeta Lal)

I zeroed in on a 1,000-year-old western red cedar (Thuja plicata), known as the “Hollow Tree,” whose gigantic open trunk has featured in many historic photographs with people -- and even elephants -- posing inside it. After perambulating the tree’s substantive trunk, I extended my arms around its knobby, chocolate-hued bark, switched off my mobile phone and closed my eyes to tune in to the sounds of the forest.

There was a nip in the air, and a hint of a fog, but I stood clinging to the formidable woody tower for about 20 minutes before slowly opening my eyes to view my surroundings -- the sun-dappled earth, the auburn leaves rustling around my shoes, and the birds above. Low clouds were scudding across a periwinkle sky.

The jury is still out on what tangible benefits accrued from my tree encounter, but it is safe to say that being in the moment was deeply immersive and rejuvenating.

India has its own historic version of tree-hugging. The Chipko movement of the 1970s, which gained traction as a way of resisting damage to forests, was all about embracing trees. Chipko, meaning “to hug” in Hindi, reflected the movement’s primary tactic of clinging to trees to prevent loggers from cutting them down.

The movement, inspired by Mahatma Gandhi’s philosophy of satyagraha (nonviolent resistance), attracted support from millions -- including women and children, many from local communities that depended on the forests for food and fuel, and indirectly for water purification and soil stabilization. Some tied sacred threads around trees or read from the holy Hindu Bhagavad-Gita, imbuing their protests with a spiritual dimension.

The Chipko movement’s provenance can be traced to 18th century Rajasthan. One of the desert state’s villages -- Khejarli, in Jodhpur -- was christened after the beautiful khejri trees (Prosopis cineraria), a flowering tree of the pea family, that thrived there. The local Bishnoi people protected and conserved these trees, which they believed symbolized purity, wealth and good fortune.

In 1730, when the Maharaja of Marwar dispatched soldiers to chop down khejri trees for an ostentatious new palace, the locals rebelled. A feisty protester -- Amrita Devi Bishnoi, nicknamed the “guardian angel of the woods” -- informed the king’s party that tree cutting was prohibited by the Bishnoi religion. She was told that if she wanted the trees spared, she should give money as a bribe.

Devi refused, and the situation escalated. As she and her three young daughters stood up to the feudal party, their arms outstretched to protect the trees, the soldiers beheaded all four. Hundreds of villagers rushed to punish the soldiers, but met with a similarly gory end. The episode was later dubbed the Khejarli Massacre.

The trees were cut down, but the sacrifice of the Bishnois was not in vain. The community’s intrepid defense of its forest has had an enduring impact on India’s environmental advocacy, not least by inspiring millions of Indians to join the Chipko movement.

Nearly three centuries later it continues to motivate concern among ecologists for the country’s environmental bounty. So find a tree and give it a cuddle. You will certainly be helping the tree, and you may feel better yourself.