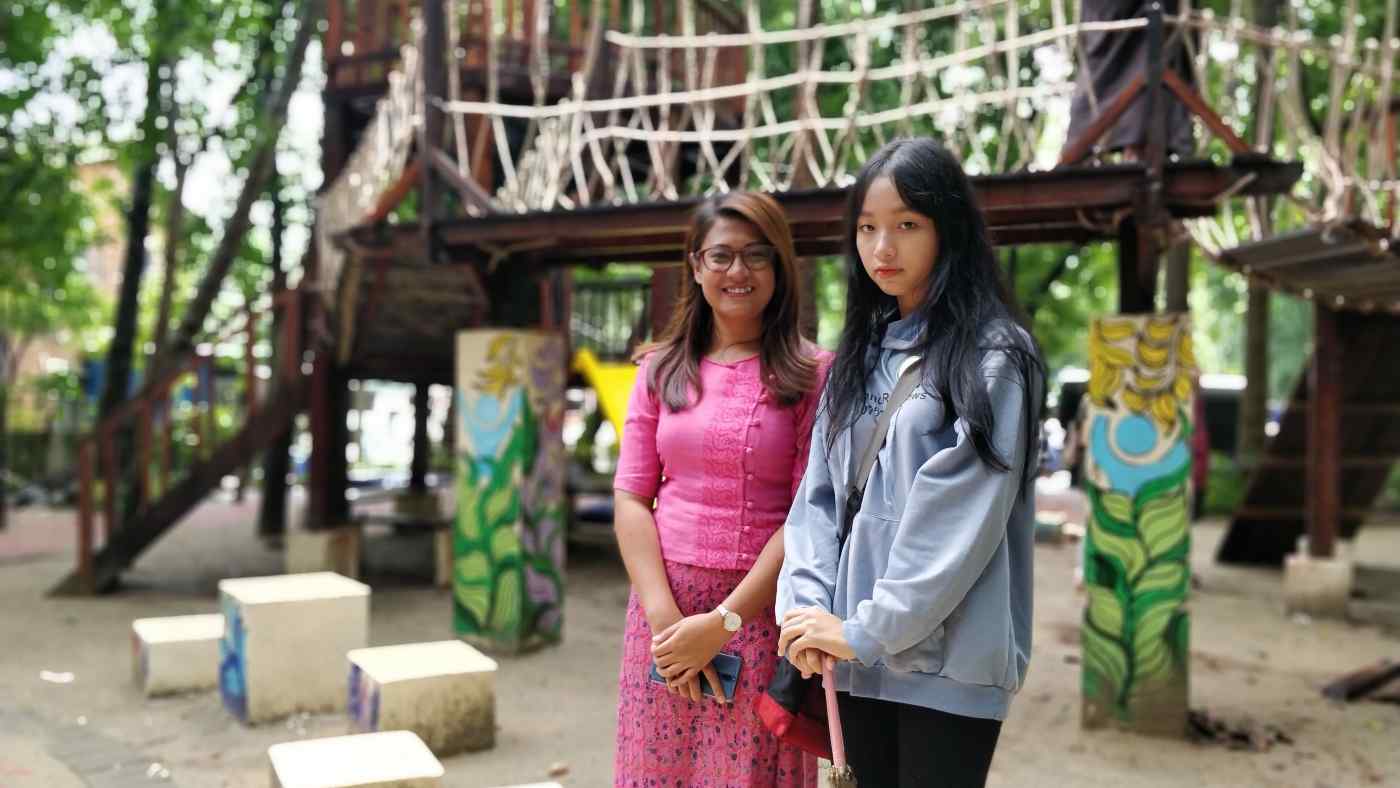 Hidden behind trees near a busy road in Yangon is a novel answer to two global hot-button issues: suffocating urbanization and sexual harassment.

At one end of a newly-created park, a treehouse overlooks a wooden bridge, and at the other is a netted court where local boys play chinlone (caneball), Myanmar's unofficial national sport.

When I visited recently, the rainy season had turned the foliage a bright green that matched the loudness of the yellow, red, and blue of the exercise equipment.

I was standing in one of two "green, safe spaces," in the west of Yangon, a fast-growing city where anything green and accessible is welcomed by locals who complain that real estate developments are too often prioritized over parks.

But Mya Malar Park, in Yankin township, is more than a green space; it has been billed as one of Asia's first parks to be designed by teenage girls, from 13 to 18 years old, who were tired of social pressure to stay indoors and needed safe places to gather in their own neighborhoods.

About 13 girls participated in the project, funded mainly by Doh Eain (Our Home), a social enterprise focused on citizen-led regenerations of urban spaces. On hearing about the idea, a local politician suggested the neglected lot, which cost about $23,000 to transform into a park. The project also gained funding from the government, a small-business accelerator called Spring and construction group Kinetic Arts.

My first impression when I visited the park was that it was for "girls only." But as the young planners explained, a gender-segregated urban space would perhaps be "too progressive." While boys and their street football hold dominion over Yangon's underpasses, everyone shares the need for an attractive park.

While it is intended to be a girl-friendly environment, free of groping and catcalling, the park is now an inclusive yet safe space, the planners said. Its open layout makes anti-social behavior difficult and the local community acts as a safeguard, with at least one of 12 caretakers visiting every day. Young Burmese women certainly seem to need respite from the barrage of harassment they face. Almost half the 38 interviewees in a 2015 women's rights group report on Myanmar said they had experienced sexual abuse in public spaces. The study highlighted rampant groping in crowded spaces which, it concluded, deterred some women from visiting them.

There are more disturbing trends, including rising incidents of rape in recent years. Government figures show there were 1,405 rape cases reported nationwide in Myanmar in 2017, a jump of 305 from 2016. The real figure is likely to be much higher, since social stigma discourages many victims from reporting sexual violence.

I asked May Poe Khin, 19, a member of my Brazilian jiujitsu class, what she thought of the initiative. She was supportive but warned that the city "is still not safe for young girls ... and there are still no consequences for the guys who harass."

"It's just, in our culture, women are lower than guys," she said, listing some discriminatory practices. Women are prevented from washing their longyi (sarongs) with men's clothes, for example, and only men are allowed to undertake the religious practice of applying gold leaf to pagodas. While menstruating, girls must not wash their hair, play outside or eat spicy food.

Her solution would be to protect girls and women through stronger legislation, and to teach them martial arts.

Of course, most boys in Yangon would not assault girls. But Swe Swe Aung of Doh Eain cited a 2018 survey by Spring that found that nearly all the 190 girls interviewed felt that parks were unsafe places. The time had come to "put girls at the center," she said.

During the six months it took to build the park, the teenagers learned how to perform audits, prepare scale drawings and develop their public speaking for presentations.

The local community was involved too. Neighbors crafted recycled plastic for flooring and planted trees -- and the only existing facility, the boys' chinlone court, was upgraded. Since it opened, the park has been busy every day, local caretakers say.

For the girls of Yangon, Mya Malar Park is a breakthrough for women's rights in Myanmar's male-dominated society: a "secure" park for girls, designed by girls. Simple to conceive and easy to execute, it could perhaps serve as a template for women in other countries in Asia and elsewhere.

Lorcan Lovett is a Yangon-based writer.