A worker shovels wheat in Kazakhstan's Akmola region. The country aims to develop its agriculture with China.   © Reuters
Asia Insight

TOKYO/ALMATY, Kazakhstan -- China's regionwide infrastructure drive is quickly proving to be a game changer in the grain trade.

The shift in the landscape was apparent when the Kazakh agriculture minister visited Beijing earlier this month. "Kazakhstan is willing to work with China and cement bilateral cooperation for common agricultural development," Askar Myrzakhmetov, who doubles as deputy prime minister, told Chinese Agriculture Minister Han Changfu on Nov. 7.

Executives of major Chinese companies were on hand to welcome Myrzakhmetov and pledged over $600 million worth of investment in Kazakh agriculture by 2024. China also agreed to boost wheat imports, meeting a Kazakh request.

The Belt and Road Initiative -- China's program for building infrastructure stretching to Europe -- has brought the countries closer together. With a new freight rail network up and running across Central Asia, it now takes about two weeks to transport goods from Shanghai all the way to Europe. That is half the time required for seaborne shipments.

Thanks to the railway and other projects, former Soviet bloc countries like Kazakhstan, Kyrgyzstan and Uzbekistan smell opportunity. So does Russia.

The U.S. and Australia have long dominated the Asian wheat market. Until recently, Kazakhstan exported wheat mainly to Uzbekistan and other neighbors. But the Kazakh Agriculture Ministry has set a goal of increasing wheat exports to China to 1 million tons within the next three years -- nearly triple last year's level.

Similarly, the then Kyrgyz President Almazbek Atambayev in late October unveiled a plan to boost sales of farm products to China, noting, "There is a market of 1.5 billion people in China." A new Tashkent-Kashgar rail route -- connecting Uzbekistan with China through Kyrgyzstan -- opened on Oct. 30.

China is not the only target market. A joint Chinese-Kazakh logistics center at the Port of Lianyungang, one of China's largest trading ports, is primarily intended for exports to the Association of Southeast Asian Nations bloc. The first phase of the logistics center is open and the facility will feature gigantic grain silos. The Jiangsu Province port faces the East China Sea and represents a key intersection of land and maritime routes. The rail line to Central Asia starts there.

In early March, for the first time, a ship carrying Kazakh wheat set sail from Lianyungang for Vietnam. A statement from the Kazakh Foreign Ministry expressed high expectations: "The Vietnamese company which acquired this wheat is going to test the quality of our product and, in case of positive results, it is going to increase the export volume of Kazakhstani product."

The flurry of infrastructure construction is allowing former Soviet bloc nations to look West, too.

The new Baku-Tbilisi-Kars railway provides a route to Europe that bypasses Russia. The 830km line connects Baku, the capital of Azerbaijan, with the Georgian capital of Tbilisi and Kars in eastern Turkey. The first freight train that passed through Baku was loaded with Kazakh wheat. The shipment was apparently sent to the Middle East and Europe via Turkey. The opening ceremony for the Baku-Tbilisi-Kars railway in Baku on Oct. 30.

"Today we are opening an important component of the new Silk Road connecting Asia to Europe," Turkish President Recep Tayyip Erdogan said at the opening ceremony for the railway in Baku. "We announce today that the China to London railway link is established."

Russia on the march

Russia is also broadening its export horizons as the Belt and Road program takes shape. It has positioned grain as a strategic export, hoping to reduce its reliance on crude oil amid low energy prices.

Until now, Russia has mainly sold grain to Turkey and Egypt, which are relatively close to its southern breadbasket. But President Vladimir Putin clearly sees China as a promising destination for grain. "Last year, exports of Russian agricultural products increased by 17%," Putin told Chinese President Xi Jinping in Moscow in July. "As part of that, we decided to increase the export of Russian wheat."

In 2015, China and Russia agreed to transport grain via Manzhouli, a border town in China's Inner Mongolia Autonomous Region. Manzhouli is known as a "land port" because it is a key stop on the train line connecting the Trans-Siberian Railway and China, making it one of the country's largest overland transport bases. Russia began exporting wheat through the hub this past April.

The buyer is state-owned Chinese grain trader Cofco, and the imports seem intended to serve as a tangible result of the Belt and Road Initiative. Cofco President Yu Xubo said he plans to import 1-2 million tons a year for now, and expand the amount to 5 million tons in the future.

Globally, wheat consumption is approaching 750 million tons, up 20% over the past decade. A further increase is expected -- mainly in Asia. Russia's wheat exports to the region increased 60% in the 2016 crop year, through this past May, but the sum of 3 million tons still accounted for only 5% of Asia's total imports.

In other words, there is plenty of room for growth. 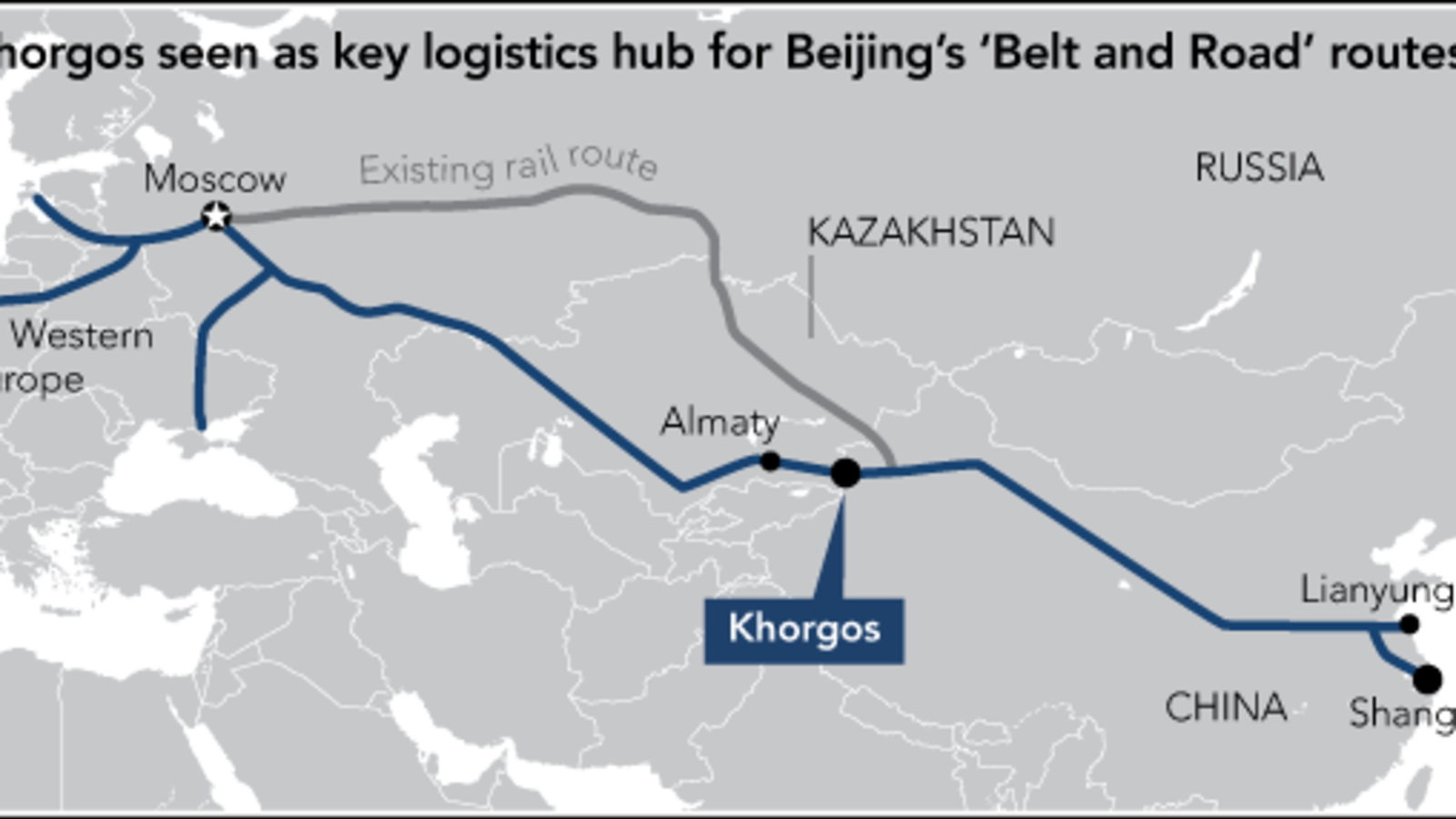 And Russia has the capacity: Its total exports for the 2017 crop year, through May 2018, are projected to top 33 million tons -- triple the figure five years earlier and enough to surpass the U.S. as the No. 1 exporter. Thanks to favorable weather and farm modernization, Russia is expecting a record bumper crop of 83 million tons this year, up 10%, according to the World Agricultural Supply and Demand Estimates released by the U.S. Department of Agriculture in November.

The amount of U.S. farmland devoted to wheat this year is the lowest in nearly a century: about 18.49 million hectares. With Russia's increased production helping to depress prices on the benchmark Chicago Mercantile Exchange, American farmers have little reason to grow more wheat. The futures price is hovering at about $4.1 per bushel, down 25% from July. 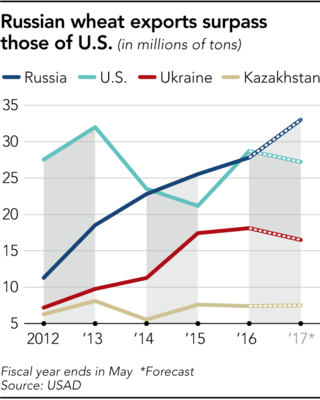 If Russia continues to raise its profile in the export market, prices on the CME, which are determined by supply and demand in the U.S., will become less useful as a global benchmark. Already there are signs that wheat prices on the CME are not correlating with those in Russia, Kazakhstan and other post-Soviet states.

China is thinking about setting up a grain futures market with Kazakhstan and other countries. "Once the development of transport infrastructure, a bottleneck for exports to Asia, is resolved with the One Belt, One Road initiative, the U.S. presence will decrease further in the future," a staffer at a major Japanese trading house said.

China and its partner governments, though, face a potential hurdle of their own: spreading anti-Chinese sentiment.

In spring 2016, crowds of demonstrators filled the streets of Almaty and other places in Kazakhstan. The protests continued for several weeks -- unusual in a country where President Nursultan Nazarbayev usually nips unrest in the bud. The trigger? A farm reform bill designed to free up more land and extend lease periods for foreign entities. Police officers detain demonstrators during a protest against land reform in Almaty, Kazakhstan, in May 2016.   © Reuters

"Waves of Sinophobia regularly engulf Kazakhstan," said Aidar Amrebayev, the head of the Almaty-based Center for Applied Political Science and International Studies. "The lack of transparency surrounding Chinese investment and projects encourages this Sinophobia, and any movement by China is received with some fear."

There are risks to consider. While the farming boom sweeping Central Asia promises to spread prosperity, countries benefiting from Chinese-built infrastructure could face economic retaliation if they somehow cross Beijing. South Korea's recent experience is illustrative: After the deployment of a U.S. missile defense system on South Korean soil, the country found itself the target of Chinese bans and boycotts.

This may explain why some in Central Asia are uncomfortable with the investment rush.

"Kazakhstan should not try to attract Chinese investment or even trade with China," argued Natalya Ivanova, a 46-year-old sales manager from Almaty. "We have money and we should build our own plants and produce our own goods."