MARILAO, Philippines -- As 2018 dawned, about a dozen workers fired up trucks and bulldozers just north of Manila and began mowing tall grass, relocating electric poles and demolishing shanties that stand in the way of one of the Philippines' largest infrastructure projects: a 38km stretch of train tracks.

Japan, which will fund the 105 billion peso ($2 billion) project, has yet to select a builder, but the Philippine government is raring to go. At a groundbreaking ceremony in Marilao on Jan. 5, Transportation Secretary Arthur Tugade was adamant about accelerating the construction.

The Japan International Cooperation Agency "wants to finish it in 2022," Tugade said. "We wanted it to be finished by 2021 at the latest."

The project is an initial segment of a longer line that will connect Manila with Clark in the north, where the government is building a new city touted as an alternative to the congested capital. These endeavors are part of President Rodrigo Duterte's "Build, Build, Build" infrastructure program, or as some call it, "Dutertenomics." 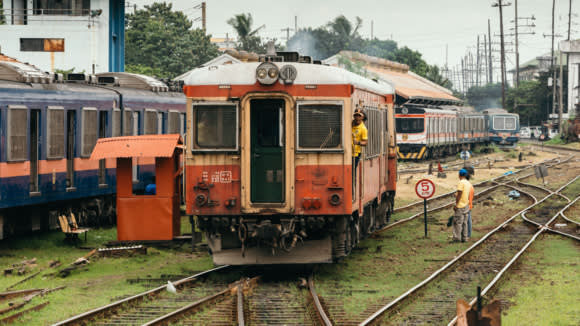 An extension of the century-old Philippine National Railways will eventually connect Manila's Tutuban Station with Clark in the north. (Photo by Jilson Tiu)

At the core of Dutertenomics is an unprecedented plan to spend 8.4 trillion pesos on dozens of ambitious projects, including the Mega Manila Subway -- the country's first underground railway, valued at $7 billion. The government aims to accelerate growth and create 12 million new jobs through these projects during Duterte's term, which runs until 2022.

This explains the transport secretary's desperation to get the railway up and running before then.

"We will make the next few years the golden age of infrastructure in the Philippines to enhance our mobility and connectivity, and thereby spur development growth" equitably, Duterte said in his second State of the Nation Address in July. "In other words, we are going to build, build and build." 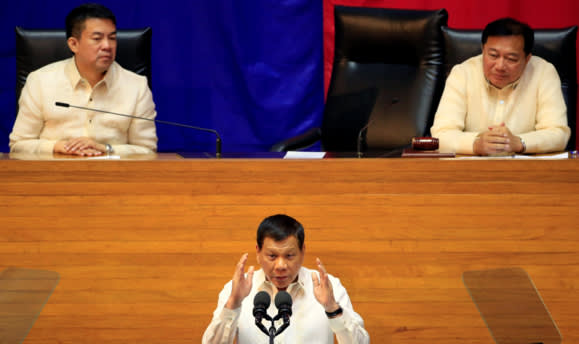 Duterte looks keen to leave a legacy as a builder, not just a brutal "punisher." In less than two years under his watch, police have killed around 4,000 drug suspects. Vigilantes have killed thousands more.

The infrastructure buildup is not only good economics but also good politics. Jasmine Santos, 27, said she is "not a fan" of Duterte but might become one. "I'm super excited about the subway," she said. "Although, knowing the Philippines, I doubt they can deliver it on time. I hope Duterte can."

It takes Santos over two hours to get to work -- a familiar story for Metro Manila commuters. The capital region's population has ballooned in recent years, with no new mass transit to relieve the gridlock. JICA says the capital is losing 2.4 billion pesos per day due to traffic, and a failure to address the problem could result in daily losses of 6 billion pesos by 2030. Annually, that would be equivalent to more than half the national budget for 2018. 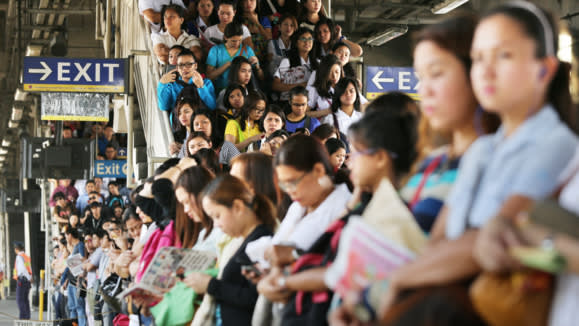 It can take more than 30 minutes just to get to the platform at train stations like this in Metro Manila. (Photo by Keiichiro Asahara)

The planned subway is expected to reduce the travel time between northern Manila and the airport to 30 minutes, from two to three hours. The government aims to break ground by the end of the year.

"Everything will be fast-tracked," Tugade said on Jan. 5, when asked about the status of other transport projects.

To make that happen, the Duterte administration has diversified its funding to include significant loans from Japan and China along with multilateral lenders like the Asian Development Bank, World Bank and the new Asian Infrastructure Investment Bank.

The new game plan has superseded the public-private partnership framework developed under former President Benigno Aquino and regarded as one of the region's most advanced.

Aquino's government generally awarded projects to bidders that offered the lowest cost or that paid the highest premium to the state. But delays were an issue: The 45km Cavite-Laguna Expressway took nearly four years from planning to groundbreaking because of technical complications, such as a typographical error that led to rebidding for the project. 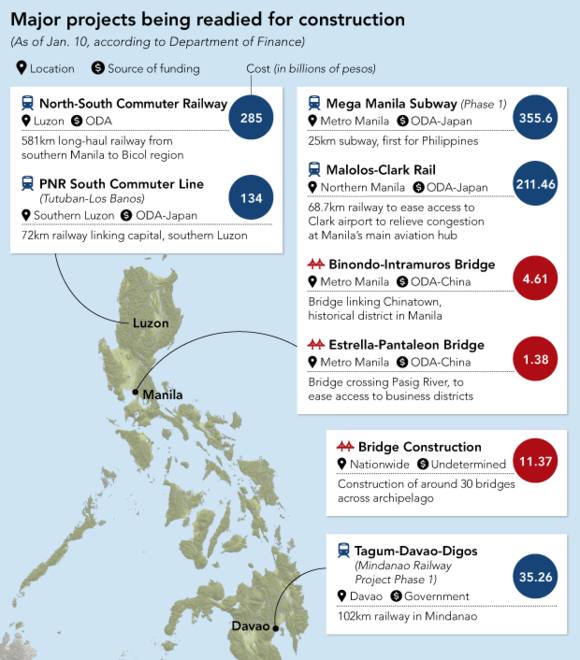 Duterte, the mercurial former mayor of Davao, wanted a better way. "This stupid rule of [relying on] the lowest bid, we should remove that," he said in November. "We should go for quality."

Since taking office in June 2016, he has swiftly approved 35 big-ticket infrastructure projects collectively worth 1.24 trillion pesos, or 75% of the value of projects Aquino cleared during his six-year term.

For the expansion of Clark airport, valued at 9.36 billion pesos, ground was broken 16 months after the bidding concluded.

Despite having "nomics" tacked onto his name, Duterte insists economics is not his cup of tea. He has given his aides a free hand, starting with his economic czar, Finance Secretary Carlos Dominguez -- a childhood friend and classmate in Davao. Dominguez is the architect of Duterte's 10-point socioeconomic agenda and is spearheading economic reforms on taxation and industrial liberalization. Other key team members include Tugade, another Duterte classmate, and Public Works Secretary Mark Villar, the son of former Senate President Manuel Villar, who now heads a political party allied with Duterte.

While they handle the economy, the president focuses on shoring up security and combating the drug trade, both of which are popular initiatives. His high approval ratings -- coupled with a supermajority in the Congress, including allies -- make it easier to push the infrastructure agenda.

In December, the administration passed its first comprehensive tax reform package, giving the government an additional 90 billion pesos to work with.

The drive to drum up funds has dovetailed with a shift in diplomatic strategy. During a visit to China in October 2016, Duterte announced his "separation from the United States," Manila's longtime economic and military ally, eliciting applause from Chinese businessmen.

Duterte has also shelved a territorial dispute in the South China Sea to secure billions in economic aid from Beijing, including two Metro Manila bridges China is donating.

While pivoting to China, the president has forged close ties with Japanese Prime Minister Shinzo Abe, hosting him in his humble house in Davao and visiting Japan twice. Abe pledged a 1 trillion yen ($9 billion) package to the Philippines during a visit to Manila last year.

The Philippines is playing a shrewd game. Unlike Indonesia and Thailand, it has not let its infrastructure projects turn into nerve-racking contests between China and Japan. In the railway sector, the northern lines have been offered to Japan and the southern segment to China. "It stands with rhyme and reason that we spread out the market," Tugade said last year.

Japan and China, in turn, have remained mum on Duterte's drug war, even as the U.S. and Europe express concerns about human rights. Duterte reaches for a handshake with Chinese Premier Li Keqiang in Manila in November.   © Reuters

To avoid sidelining domestic companies, Duterte has welcomed unsolicited proposals as well -- another break from Aquino's approach. Alliance Global Group has pitched a monorail for the capital. Ayala Corp. and SM Investments have jointly proposed an elevated toll road valued at 25 billion pesos. San Miguel wants to handle a $2 billion flood control project. And conglomerates including JG Summit Holdings and LT Group have banded together to offer to expand Manila's airport.

Euphoria over the infrastructure plans pushed the benchmark Philippine Stock Exchange index to record highs multiple times last year. And officials are determined to get more construction rolling in 2018. During a loan signing at the ADB on Jan. 10, Public Works Minister Villar said, "2017 was a very aggressive year, but we can expect more projects to be online in 2018."

Socioeconomic Planning Secretary Ernesto Pernia on Tuesday said Build, Build, Build could add 1-2 percentage points to the country's growth in 2018. "In other words, our 7-8% growth target is more feasible."

The finance department says that as of Jan. 10, 15 projects totaling 1.18 trillion pesos are already in pre-construction stages. The bulk will be funded by foreign loans. But while Dutertenomics has gained broad support, some worry about the debt load.

Vice President Leni Robredo, who belongs to a party critical of Duterte, is cautious even though a China-funded railway will make it easier to travel between Manila and Bicol, her home region in southern Luzon. "Our fear is we might get stuck in a debt trap like the one experienced by Sri Lanka," Robredo said in October, referring to the South Asian country's heavy obligations to China. 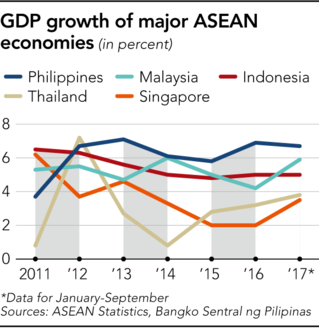 The tax reform did not generate as much revenue as hoped. Other tax changes are lined up, but Duterte's central goal of rewriting the constitution and shifting to a federal structure could preoccupy lawmakers, derailing immediate economic reforms. This could lead to still more borrowing.

On the macroeconomic front, Build, Build, Build is expected to widen a trade deficit that reached a record in November. As construction picks up, steel and machinery imports are likely to grow. This could put pressure on the peso, which is already touching its highest levels in a decade.

The president's team is able to downplay these concerns thanks to Aquino, who trimmed debt, improved tax collection and left a strong economy.

The country was Southeast Asia's fastest-growing major economy in 2017, with the rate hitting 6.7%.

"Many people are afraid that the Philippines is borrowing too much money," Dominguez said. "However, let me just point out that our debt as a percentage of the GDP has been on steady decline." On the trade deficit, Dominguez said the Philippines is investing in productive assets. "We are not importing stuff like Louis Vuitton."

Duterte's biggest problem may not be debt but rather the government's ability to get things moving cleanly. Japanese investors still complain of red tape. "It's only fast at the ministerial level," one said.

Duterte himself recognizes these challenges.

While inaugurating a new air traffic control system on Jan. 16, the president blasted corrupt bidding that led to unfinished roads and poor drainage. After delivering prepared remarks, which repeated the phrase "golden age of infrastructure," he derided the writer, saying, "Look at the choice of words -- golden age. ... You are like a fool here." 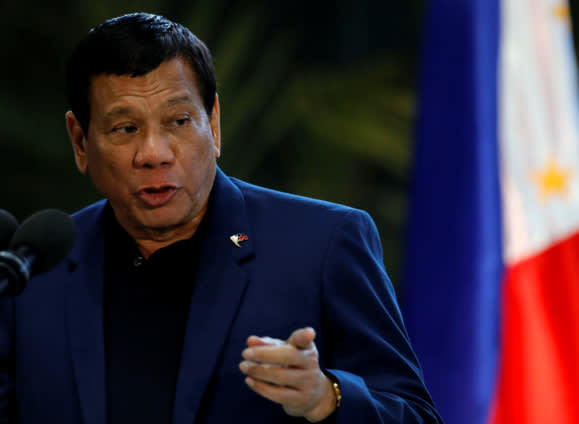 At an event with JICA officials, the president ordered his staff not to use the phrasing unless "harvesting a golden-age product by the end of the year" is assured.