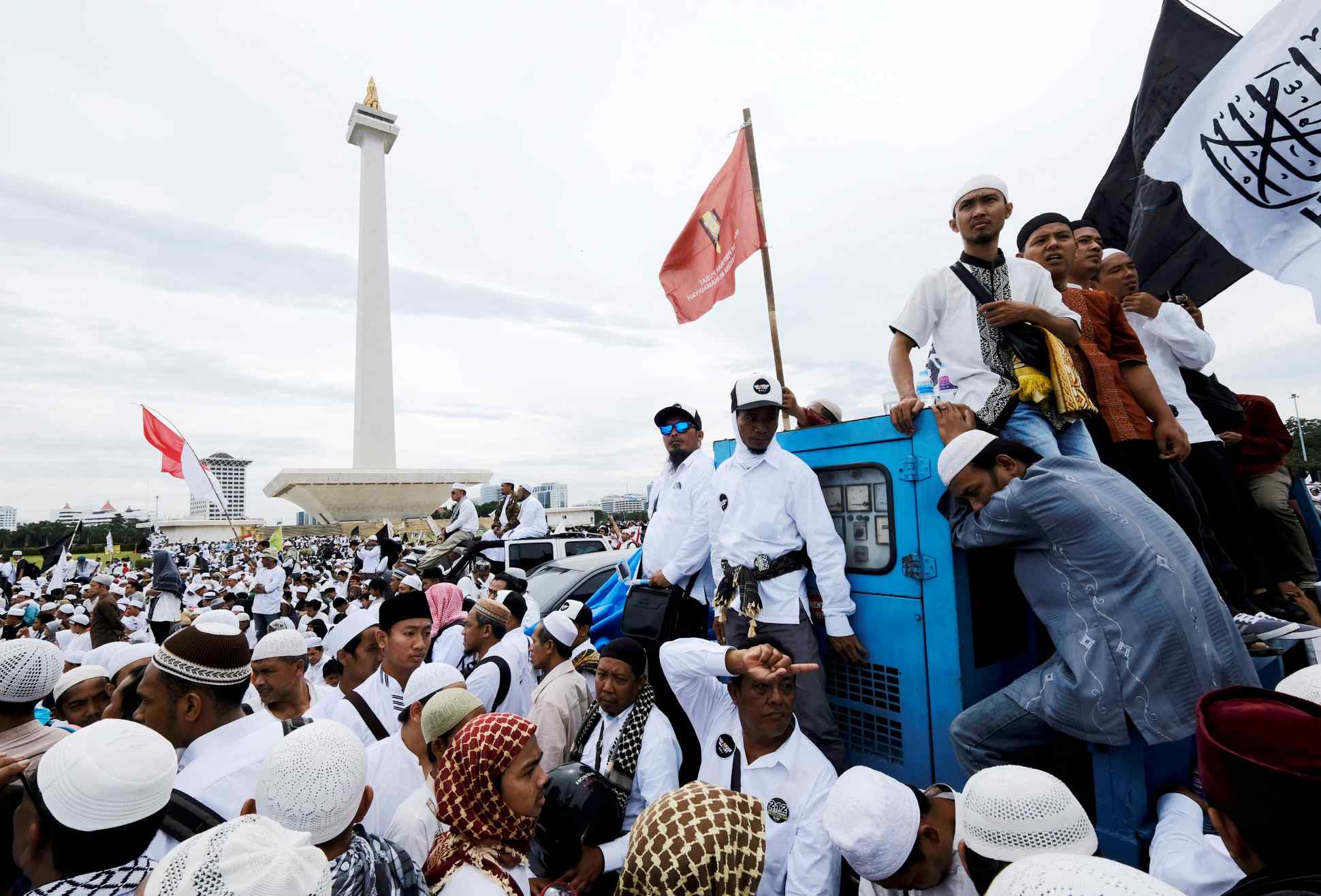 President counters smears with emphasis on Jerusalem and Rohingya

JAKARTA -- Ridwan Kamil, the popular mayor of Bandung in Indonesia's West Java Province, was once touted by Muslim conservatives to be destined for national leadership. But this changed in March when Kamil, previously backed by the opposition, agreed to support President Joko Widodo ahead of the 2019 general election.

Kamil, who will run for West Java governor next year, suddenly found himself on the receiving end of a propaganda campaign portraying him as a "lesser Muslim." He has been blasted for visiting a church during the Christmas season and accused of being a Shiite -- a shunned minority in the Sunni-majority country -- among other smears.

Widodo already had a scare in the 2014 election campaign, when what was once a dominant lead shrank rapidly, partly due to rumors about his religious faith. On election day, he eked out a narrow victory.

Islamists' growing influence over Indonesian politics became clear in the Jakarta gubernatorial election in April. The capital's once-popular governor, ethnic-Chinese Christian Basuki Tjahaja "Ahok" Purnama, was accused of blasphemy, lost the race and was sentenced to two years in prison.

The accusation that Purnama, a Widodo ally, insulted the Quran had sparked two huge rallies by conservative Muslims in late 2016. Burhanuddin Muhtadi, executive director of pollster Indikator Politik Indonesia, called the rally leaders "religio-political entrepreneurs" with links to political interests, despite their claims that they are purely looking out for Islam.

Even with Purnama in jail, the movement lives on -- stoking concern about sectarian tensions in the world's most populous Muslim country.

Islamists have been using the tag "Alumni 212" -- a reference to the date of one of the big anti-Purnama protests -- to mobilize crowds for what they call Islamic causes. This includes the Alumni 212 Reunion at the National Monument in Jakarta on Dec. 2, during which speakers claimed that Widodo has criminalized ulemas -- councils of Muslim scholars -- while selling Indonesia to Chinese tycoons and foreigners. To counter allegations that he is somehow anti-Islam, Widodo has distanced himself from Purnama -- a move some see as tantamount to throwing the jailed ex-governor under the bus. The president has also forged strong ties with Indonesia's two largest Muslim organizations, the Nahdlatul Ulama and Muhammadiyah, which are generally seen as moderate.

Internationally, the president has made a point of raising Indonesia's profile in the Muslim world. He has been outspoken on the plight of Myanmar's Rohingya Muslims and, more recently, on the issue of Jerusalem.

Regarding the U.S. decision to recognize Jerusalem as Israel's capital, Widodo told the Nikkei Asian Review on Dec. 22 that "Indonesia is always behind Palestine to fight for their freedom."

On the subject of the Rohingya, he said, "As the country with the world's largest Muslim population, the Indonesian people want the Burmese government to settle the problems in Rakhine State as soon as possible."