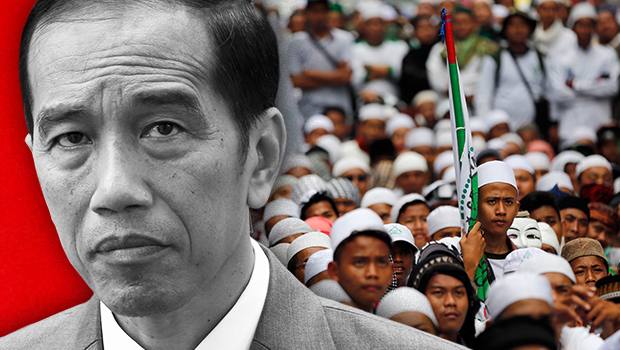 Hard-liners' ability to rally the masses cows politicians into acquiescence

JAKARTA -- It was an ordinary Sunday Mass until the 300 congregants heard the young man shouting "Allahu akbar," or God is great.

The man stormed into St. Lidwina Church in Yogyakarta, on the Indonesian island of Java, at around 7:30 a.m. on Feb. 11. Brandishing a meter-long sword, the alleged assailant attacked Father Karl Edmund Prier at the altar and decapitated two statues of Jesus Christ before he was shot by police. The motive remains unknown, but investigators believe the man, later identified as Suliyono, was influenced by radical Muslim groups.

The incident was the latest reminder of how such groups are tugging at the threads of Indonesia's multiethnic and multireligious society, threatening one of the country's guiding principles since independence: Bhinneka Tunggal Ika, which translates to unity in diversity.

As president, Joko Widodo is the chief guardian of that principle, and he issued a strong statement after the St. Lidwina attack. "There is no place in our country for intolerants. Especially those who are violent." Leading Muslim organizations also condemned the attack.

Yet, official and religious solidarity against intolerance is not exactly rock solid. 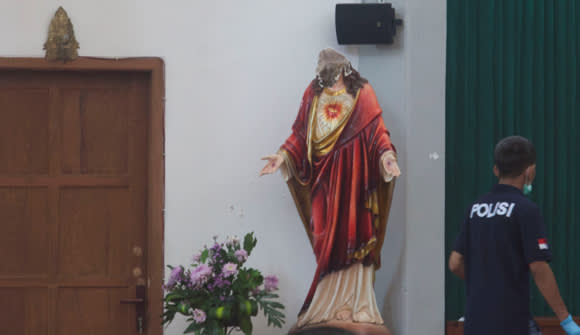 A damaged statue of Jesus Christ stands inside Yogyakarta's St. Lidwina Church after an attack by a sword-wielding man on Feb. 11.   © Reuters

Two weeks before the attack, St. Paul's, another Catholic church in Yogyakarta, canceled a charity program after a conservative Muslim organization protested the "Christianization" of the community.

The protest received unexpected support from Sultan Hamengkubuwono X, the hereditary governor of Yogyakarta Province. The charity "should not have organized under the name of the church," he said.

This was startling to those who expect the governor to be conscious of all faiths, especially with ancient Buddhist and Hindu temple compounds -- Borobudur and Prambanan -- in or near Yogyakarta.

A spate of attacks against religious leaders, such as a Buddhist priest and two Muslim clerics, underscores the growing tensions in the country. At least four cases have been reported this year. The Jakarta-based Institute for Democracy and Peace, known as Setara, recorded 109 cases of intolerance from January to August last year, including attacks on minorities, religious leaders or facilities. Islam is the dominant religion in Indonesia, with adherents accounting for more than 80% of the population. Most are moderate and peacefully live side by side with Christians, Hindus and neighbors of other faiths. But in the increasingly charged social atmosphere, many may be reluctant to speak out against intolerance.

For their part, the hard-liners, who do not hide their disdain for pluralism, have shown a knack for mobilizing large crowds to protest perceived affronts to Islam. This strength-in-numbers strategy is raising their political clout. The tip of the spear is the Islamic Defenders Front, or FPI. The group's goal is to introduce sharia law to Indonesia. Its members wear white robes and have a reputation for violent tactics. Until recently, the media did not take the FPI seriously, since its objectives were considered too radical.

Now the group has become impossible to ignore, but why?

"Radicalism is not growing in Indonesia so much, but using social media makes it easier to spread such information," said Setara Chairman Hendardi.

The FPI was a major factor in the downfall of Jakarta's previous governor, Basuki Tjahaja Purnama, known as Ahok. The group staged a rally on Dec. 2, 2016, claiming that the ethnic-Chinese Christian politician had insulted the Quran. A crowd of 300,000 rallied in the capital, chanting "jail Ahok."

The governor failed in a re-election bid and was later sentenced to two years in prison for blasphemy.

Many politicians now recognize the power of the hard-liners. Prabowo Subianto, a former son-in-law of longtime dictator Suharto, endorsed Anies Baswedan in his campaign against Ahok. When Baswedan won the governorship last April, Subianto thanked the FPI.

The advance of the hard-liners can be traced to Indonesia's decentralization process around the turn of the century.

After the fall of Suharto in 1998, political reforms gave local authorities more control. Regional governments were empowered to recruit teachers and choose teaching materials. Consequently, the central government has lost control of religious education, creating space for indoctrinating children with the idea of Islamic supremacy. "The reform period had an impact on the development of extremism, leading intolerant groups to dare to actively voice their view," said Jeirry Sumampow, a spokesman for the Indonesian Communion of Churches, a Christian group.

Polling suggests younger generations are increasingly embracing hard-line thinking. Twenty percent of high-school students support a caliphate, according to a Reuters report on a poll by local research company Alvara. Another poll found that about 60% of high school students think they have a radical attitude toward religion.

"Conservative ideology has not yet become the mainstream, but the poll results are very worrying," a European diplomat said. Presidential hopefuls will be mindful of the data, not to mention the lessons of the Jakarta gubernatorial race, as they gear up for the next general election in April 2019. Campaigning for local elections in major provinces, scheduled for this June, is underway. For some politicians, the allure of conservative Muslim support will be too hard to resist.

Intense pressure on the LGBT community is a case in point.

"It's almost final now, regarding the LGBT issue. We're working on extending the definition of LGBT," Hanafi Rais, a lawmaker from the Islamic-leaning National Mandate Party, told reporters on Feb. 1.

Rais was speaking about a draft revision of the criminal code: Lawmakers from all 10 political parties in the legislature have reportedly agreed that gay sex, as well as premarital and extramarital sex, should be included in the legal clause on adultery. Perpetrators could face up to five years in prison.

There is no place in our country for intolerants. Especially those who are violent

The draft has drawn fierce criticism from human rights groups and the international community. Many Indonesians will tell you those acts should not be subject to penalties. Yet within the legislature, there have been few objections, likely because lawmakers fear being branded as "anti-Islam" -- a potentially career-ending label. Even Widodo remains silent.

The president himself was targeted with such smears during the 2014 election campaign. Rumors that Widodo is ethnically Chinese allowed his opponent, Subianto, to push the anti-Islam line and almost catch up.

The basic principles of democracy hang in the balance -- not just unity in diversity, but freedom of speech and other rights. Already, the country's score in the Economist Intelligence Unit's Democracy Index fell in 2017. 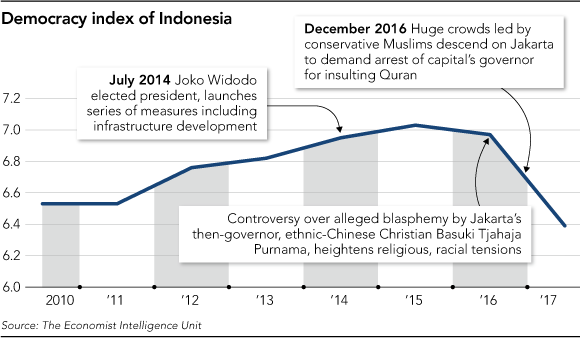 Widodo has pushed numerous infrastructure projects in his first three years in office. At home and abroad, investors are gaining confidence in his stewardship. Expectations for stable growth are high: By 2050, the country is projected to become the world's fourth-largest economy.

"Indonesia's resilience to external shocks has steadily strengthened in the past few years, as macroeconomic policies have consistently been geared toward maintaining stability," Fitch Ratings said when it upgraded Indonesia's sovereign bonds on Dec. 21.

The ethnic-Chinese head of a conglomerate stressed that the uncomfortable mixture of religion and politics is nothing new. "There are always politicians who take advantage of religion in elections," the executive said. "I'm not worried."

Yet, hard-line Muslim groups are increasingly targeting ethnic Chinese, many of whom are Christians, alleging that they control the country's wealth.

"Hey, Mr. President, don't sell our country to Beijing," former parliamentary speaker Amien Rais said recently. The moderate Muslim leader helped bring down Suharto and holds a Ph.D. from the University of Chicago, but in today's political environment, even he sounds similar to the FPI.

Turkey may be a cautionary tale.

The moderate Muslim country long maintained a commitment to secularism, guaranteeing the government's independence from religion. Now, after more than a decade under President Recep Tayyip Erdogan, that principle is under siege.

Parents are finding their neighborhood schools are placing less weight on science in favor of religion. The Diyanet, a government body that oversees mosques nationwide and makes judgment on religious affairs, is more powerful than ever, armed with a budget 14 times bigger than when Erdogan came to power.

Will Indonesia go the way of Turkey, or perhaps its own province of Aceh?

In Aceh, where sharia law is partially implemented, religious police order residents to dress appropriately as Muslims. They ban women from straddling motorcycles. Unmarried men and women are not allowed to be in the same room.

Human Rights Watch, a U.S. advocacy group, has accused the Aceh authorities of extending the interpretation of sharia law and applying it to women and other socially vulnerable groups. Increasingly, Indonesian politics is a competition between two visions of the state.

In one opinion poll, respondents were asked to choose a presidential candidate who best embodies Pancasila -- five national principles, including unity in diversity. Their top choice was Widodo.

The respondents were also asked to choose a candidate who is closest to Islam. Subianto ranked first.

The two men are widely expected to face off again in the 2019 election, and the result could be felt for generations to come. "If intolerance were accepted," warned the Communion of Churches' Sumampow, "Indonesia could fall into a crisis of division."

Nikkei staff writers Akihiro Sano in Istanbul, and Bobby Nugroho and Erwida Maulia in Jakarta contributed to this story.