Construction workers take a break in Singapore, where migrants make up about a third of the workforce.   © Reuters
Asia Insight

JAKARTA/BANGKOK -- A court case unfolding in Bangkok has focused attention on the lives of migrant workers in Southeast Asia, albeit with an unexpected twist. This time, an employer accused of abuse is suing its former employees.

Fourteen migrants from Myanmar are on trial for making false human rights claims against Thammasaket, a chicken farm operator. They are also accused of providing false information to public officials.

The labor ministry previously ordered the company to extend a total of 1.7 million baht ($54,000) in compensation to the workers, for violations such as underpayment of wages and insufficient time off. But Thammasaket is refusing to pay.

"This is defamation," the company's lawyer told the court on the first day of the trial, Feb. 7. Street food vendors who work in the farm's neighborhood were brought in to testify. "We saw the Myanmar workers come out to the market," one vendor said, supporting the company's argument that the employees were granted sufficient free time. "They looked really happy."

Regardless of whether the defendants had valid grievances against Thammasaket, the case has stoked debate over the working conditions facing millions of migrants across the region. All too often, abuses are more clear-cut -- and sometimes even fatal.

In Malaysia, where around 400,000 foreign maids work, an Indonesian named Adelina Sao died in a hospital in Penang on Feb. 11. She had been found with head injuries and infected wounds on her limbs, after two years working in the country. Neighbors of the family accused in Sao's death said she was forced to sleep on the porch beside the dog. Migrants from Myanmar work in a garage on the outskirts of Bangkok. (Photo by Ken Kobayashi)

In response, Indonesia has threatened to ban citizens from working as domestic helpers in Malaysia. "A moratorium is important so we can restructure our employment system [for migrant workers] to prevent cases such as Adelina's from happening again," Indonesia's ambassador to Malaysia, Rusdi Kirana, said on Feb. 15.

Although there have been a number of similar cases in recent years -- including one in which a Malaysian couple accused of killing a maid by starvation were sentenced to death in 2014 -- Malaysian Deputy Prime Minister Ahmad Zahid Hamidi described Sao's ordeal as an "isolated case" and said he hoped Indonesia would not impose a ban.

There are no easy answers, given the scale of migration in Southeast Asia and the economic disparities that drive it.

Nearly 7 million Southeast Asian migrant workers toil within the region, according to the International Labour Organization. Most hail from Cambodia, Indonesia, Myanmar and the Philippines, while most work in Singapore, Thailand and Malaysia. They have become indispensable to their home countries and hosts alike.

Malaysia, which has a gross domestic product per capita of around $10,000, is a magnet for workers from Indonesia, where GDP per capita is about $3,600. Singapore, which ranks in the global top 10 by the same measure, draws workers not only from poor countries but also Malaysia. Migrants make up around a third of Singapore's workforce; sectors like construction depend on them heavily.

These people do jobs that "Singaporeans don't want to do because they are dirty, dangerous, of low status and/or poorly paid," said John Gee, chair of the research subcommittee at Transient Workers Count Too, a nongovernmental organization that supports migrant workers in Singapore. 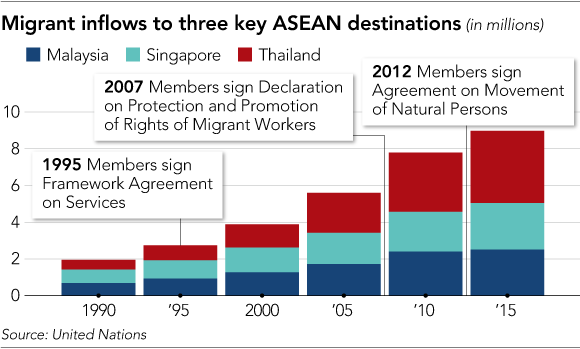 When it comes to stopping abuse, some governments have tightened controls only to struggle with unintended consequences.

Thailand found itself in the international media spotlight a few years ago over forced labor and human trafficking, particularly in the fisheries industry. Facing an outcry, the military government clamped down on undocumented migrants, who tend to be the most vulnerable to trafficking. Last June, a new law took effect requiring all migrant workers to be registered with the government, with undocumented individuals and their employers subject to tough criminal penalties.

The law, however, triggered an exodus of workers, causing a sudden labor shortage and prompting Prime Minister Prayuth Chan-ocha to delay enforcement by six months.

Philippine President Rodrigo Duterte, meanwhile, has barred Filipinos from working in Kuwait after a domestic helper was found dead in her employers' apartment more than a year after she was reported missing. "We are here to see to it that every Filipino is treated decently," Duterte told workers returning from the Middle Eastern country on Feb. 13, under a Kuwaiti amnesty program that allows undocumented Filipinos to change their status or leave. The Philippine Foreign Affairs Department estimates that 250,000 Filipinos work in Kuwait; since Feb. 11, the government has welcomed back nearly 2,000.

Yet, from an economic perspective, the Philippines cannot afford to bring too many workers home.

All told, 2.2 million Filipinos were recorded as working abroad in 2016. The country relies on their remittances to spur consumer spending -- the main driver of the economy -- and boost its dollar reserves as a buffer against external shocks. In 2017, remittances reached a record $28.1 billion, up 4.3% on the year and equivalent to 10% of the Philippines' gross domestic product.

And while Indonesia might push back against Malaysia in the same way the Philippines responded to abuse in Kuwait, experts say a ban could lead to even more undocumented migration or human trafficking.

"I don't think that a moratorium will solve the current problem, and it could even make the situation worse," said Daniel Awigra, who works on migrant worker issues at the Human Rights Working Group, a Jakarta NGO.

The Association of Southeast Asian Nations has tried to act collectively. After a decade of on-again, off-again negotiations, member states last November signed the ASEAN Consensus on the Protection and Promotion of the Rights of Migrant Workers. The document, which followed a similar declaration adopted in 2007, was intended as the crowning achievement of the Philippines' year as chair of the bloc.

Still, the consensus is nonbinding and leaves it up to individual countries to address and prevent abuses or negotiate bilateral deals on migration. "Some of the more progressive features [of the agreement] have the caveat that they are subject to national laws," said Nilim Baruah, a migration specialist at the International Labour Organization. He added that the deal should "nevertheless be welcomed" as it "could result in actionable commitments."

The absence of unified standards is likely to mean further sporadic crackdowns on undocumented migrants or bans on working in particular sectors and countries.

Instead of waiting for political solutions, some employers have come up with their own simple answer: treat foreign workers better.

Charoen Pokphand Foods, which was accused in a 2014 report in The Guardian of buying fish meal from suppliers that use "slave labor," is one example.

At CPF's largest poultry plant, in the Thai province of Nakhon Ratchasima, Cambodian workers in white uniforms and blue hats cut chicken along a 4km production line. The meat they process ends up on dining tables worldwide.

The Cambodians are willing to work more hours for the money and rarely quit, unlike Thais, who have many other job options

Cambodians account for nearly 40% of the plant's 9,300 workers, making them indispensable to CPF, which wants to expand but faces a serious shortage of Thai labor.

"Thais nowadays prefer to work in the service sector, such as at shopping malls and restaurants, rather than in a factory," said Apichart Kaewking, vice president of CPF's food processing poultry business. In line with an agreement between Thailand and Cambodia, the plant started hiring migrants in 2013 through recruiting agencies registered with the government in Phnom Penh.

The Cambodian employees receive the same wages and welfare benefits as Thai workers. Dormitory accommodations are free, including utilities, and a translator is on duty to help with communication.

The extra costs are worth it, Apichart said. "The Cambodians are willing to work more hours for the money and rarely quit, unlike Thais, who have many other job options."

Vannak Korm, a former farmer, is part of the Cambodian contingent. The 23-year-old came to the plant with her husband seven months ago. "I feel more relaxed in Cambodia with my family, of course, but the money here is much better," she said. She earns nearly 50 times more than she did back home. 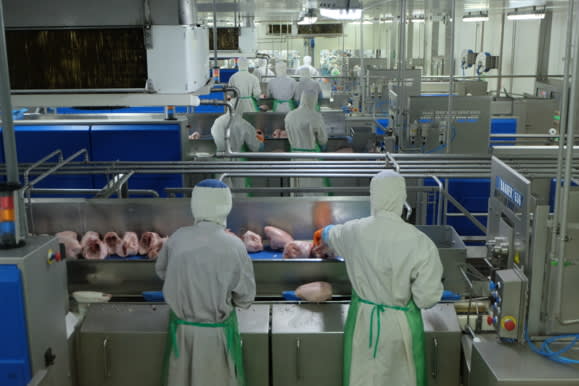 Cambodians account for nearly 40% of the workforce at this Charoen Pokphand Foods' poultry plant in Thailand. (Photo by Yukako Ono)

But not all businesses have the will or the means to improve conditions for migrants. And as governments tighten restrictions, companies that rely on these vulnerable people are likely to face steep wage increases.

From last April to September, Malaysia's private sector wages rose by over 7%, compared with a typical rate of about 4% before. Malaysia has arrested many migrants as well as people employing them illegally, and the government introduced a tax this year on companies with any foreign workers.

Another factor to consider is the rapid growth of the region's less-developed economies. As job opportunities increase, some workers are opting to return home -- a shift that could take vital labor away from Thailand, Malaysia and Singapore.

After Thailand's new law on migrant registrations kicked in, a 24-year-old woman returned to Cambodia and found a job at a new Japanese factory in Poipet, a town on the Thai border. She had worked in Thailand for two years; she does not want to go back.

"In Cambodia, I can live close to my friends and relatives, and the cost of living is much cheaper," she said. "My wages may be lower than in Thailand, but I can work with peace of mind, without worrying about my legal status or being chased by authorities."