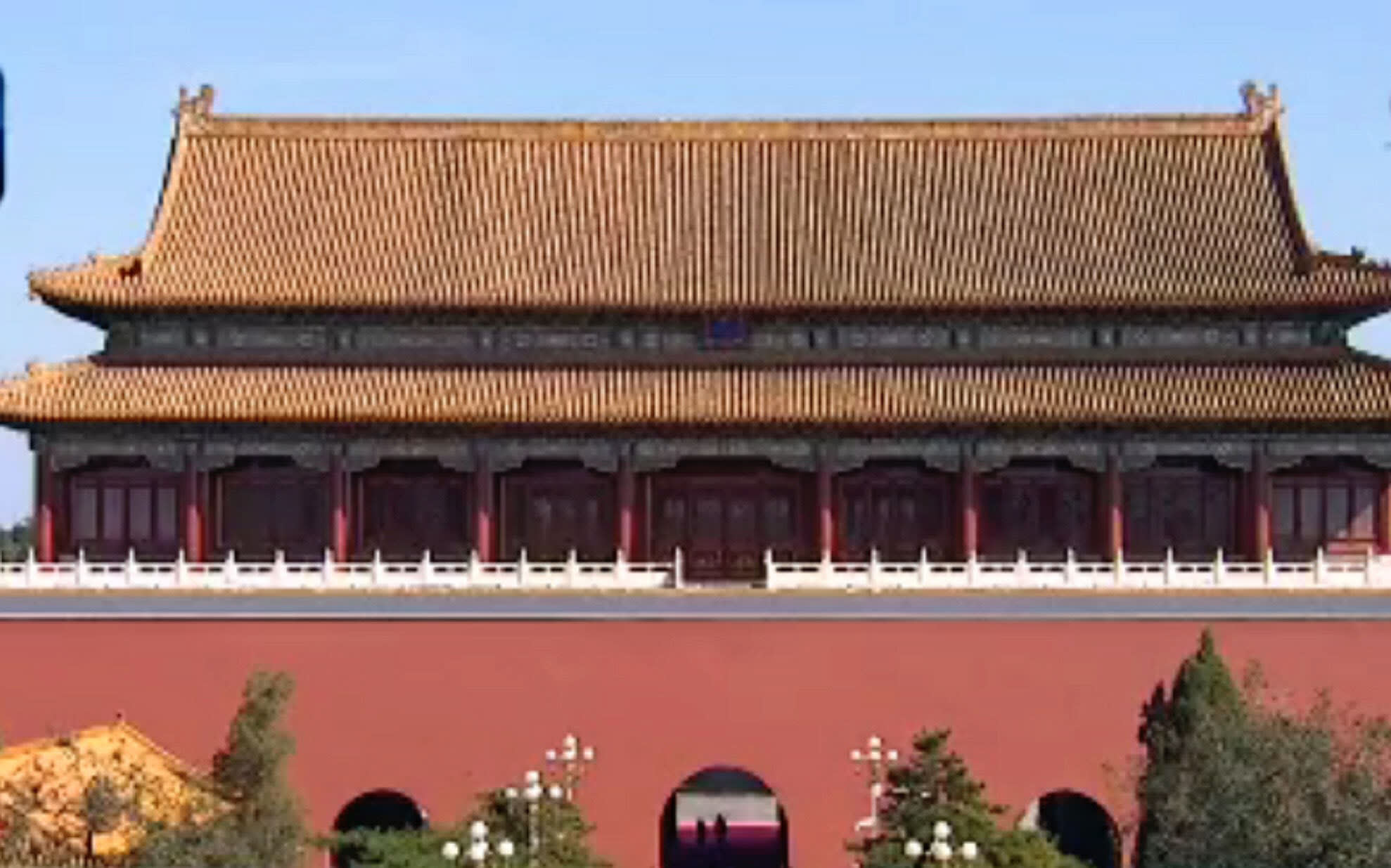 Duanmen Gate, the front gate of the Forbidden City in Beijing, is seen in this Sept. 3 image from CCTV. The gate formed the backdrop for a ceremony in which Chinese President Xi Jinping greeted foreign dignitaries the same day.
Politics

A 'new emperor' emulates an old one

BEIJING -- It was a highly unusual scene, reminiscent of a Chinese emperor who ruled a prosperous global empire six centuries ago.

Dozens of top leaders and senior officials from foreign countries and representatives from international organizations queued to have "an audience" with China's supreme leader.

Other foreign guests included Russian President Vladimir Putin, who has faced off against the Group of Seven major industrialized countries over Ukraine, and U.N. Secretary-General Ban Ki-moon.

One by one, the top foreign leaders and other guests took a nearly 70 meter stroll over a red carpet before being greeted by Xi. Each guest shook hands with the host and posed for a commemorative photo, with Xi's wife, Peng Liyuan, beside them. Xi was dressed in a Mao suit; Peng was wearing a red dress.

It was the first time for a top leader of the Chinese Communist Party, which has criticized the feudal system of government, to receive foreign guests in this manner at the former imperial palace.

The vast Forbidden City, as it is commonly known, was home to Chinese emperors of the Ming and Qing dynasties. Even Mao Zedong never set foot inside the complex.

"Those who are not familiar with Chinese history and the ancient Sinocentric order probably didn't pick up on this," one said. "President Xi emulated the Yongle Emperor, who ruled China when the Ming dynasty was in its heyday as a global empire. As a Chinese person, I am proud of it."

The Yongle Emperor was the third emperor of the Ming dynasty, reigning from 1402 to 1424.

The other intellectual said: "This manner of receiving foreign guests was designed to curry favor with Xi. It was meant to remind people of the tributes paid to Chinese emperors in the past, and it could even reinforce the 'Chinese threat' theory. No one is complaining, simply because China is economically strong. Chinese people familiar with the international community are concerned about it." Xi greeted the stream of foreign dignitaries in front of Duanmen Gate, the front gate of the Forbidden City. The location was not chosen at random.

The gate was built under the sponsorship of the Yongle Emperor, who also ordered the construction of a fleet of huge wooden ships, each measuring more than 120 meters long.

The Ming dynasty's armada, commanded by Zheng He (1371-1433), a Muslim admiral from Yunnan, made seven expeditions to demonstrate the Yongle Emperor's influence to the rest of the world. On its voyages, the armada visited the South China Sea, India and the Arabian Peninsula, and even reached as far as an area near Kenya.

Parallels can be drawn between these muscle-flexing expeditions in the 15th century and present-day China's controversial land reclamation activity in the South China Sea and aggressive economic advances into Africa.

Combine these historical echoes with Xi's "audience" with foreign leaders and it is not hard to see why some are viewing the Chinese president as a "new emperor" keen to rebuild a global empire.

Many countries are alarmed by these developments, perhaps none more so than those Asian nations that were once part of the Sinocentric order.

Xi's reception ceremony did not go entirely to script.

After walking down the red carpet rolled out in front of Duanmen Gate, shaking hands with President Xi and his wife and having a lengthy chat the couple, South Korean President Park started to walk away before a photo could be taken.

A puzzled Xi turned to Park with his eyes downcast. Park was called back so the three could pose for a photo together, and the two presidents eventually had a long conversation "on an equal footing."

This bit of apparent confusion drew laughs from the crowd watching the ceremony live on a huge screen in front of Tiananmen Gate. Apparently, they thought Park was so nervous she had simply become flustered.

But according to two Chinese experts well-versed in the histories of China and the Korean Peninsula, it would be foolish to write the incident off as a simple mistake.

"Park realized the situation wasn't good and became very tense. That must be what prompted her to act so outrageously."

According to the other: "As South Korea's proud head of state, Park was naturally worried about the criticism she would face at home if she were seen to be flattering China. That's why she was reluctant to shake hands with Xi as if she were his subject and then amicably pose with him for a photo." 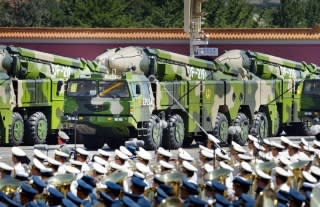 Dongfeng 21D ballistic missiles, dubbed "aircraft carrier killers," are on display during the military parade in Beijing on Sept. 3.

The cornerstone of the ancient Sinocentric order was the tributary system, under which foreign rulers paid tributes to Chinese emperors in return for their recognition and other benefits. Dynasties on the Korean Peninsula were among the tribute payers.

The Qing dynasty, China's last imperial dynasty, was founded by Manchus, not by Han Chinese. During that era, the idea of a "mini-China" prevailed across the Korean Peninsula, where it was widely thought that only Korea could embody the traditional and true Sinocentric order that had existed down through the Ming dynasty.

Many Chinese welcomed South Korean President Park's presence at the Sept. 3 military parade in Beijing. One online post read, "The female sovereign of Goryeo paid a tribute to the Chinese court."

Goryeo, or Koryo, is the name of the Korean dynasty that existed between 918 and 1392.

South Korean President Park must also have realized how she was being viewed by many in China, namely, as the leader of a subject state paying a visit under the ancient tributary system.

Park decided to visit China -- and even attend the military parade -- after taking into account South Korea's heavy economic reliance on China. At the same time, however, she made it clear that she does not want to see South Korea to be drawn into China's orbit again. This is quite natural, as South Korea is a key ally of the U.S. and still technically at war with North Korea.

In a clear attempt at damage control on the part of Beijing, images of Park's unexpected behavior on Sept. 3 and her long conversation with Xi were mostly deleted from official Chinese media.

At Chinese museums, one can find murals depicting emissaries from other Asian states bearing flags as they visit ancient China to pay tributes to emperors. Korea sent such emissaries to China, but Japan, being outside the tributary system, did not.

The way Xi received foreign dignitaries at the former imperial palace clearly harked back to that time in China's history, giving the ceremony a different meaning from any other held in Tiananmen Square or at the Great Hall of the People.

Japanese Prime Minister Shinzo Abe had initially considered visiting China in early September. If he had, he would have found it quite difficult to have an "audience" with Xi.

Abe would also have felt uncomfortable viewing the massive military parade that followed.

The military extravaganza commemorated the 70th anniversary of China's victory in "the war of resistance against Japanese aggression" and "the world anti-fascist war." As Xi and top foreign leaders watched the display from the Tiananmen rostrum, Dongfeng 21D anti-ship ballistic missiles, which can target U.S. aircraft carriers, rolled through Tiananmen Square.

It would be difficult for any Japanese leader to stand by and smile as another country rolls out weapons capable of threatening Japan's most important ally.

Japan and China may have missed one chance to repair their strained relations. But the door for dialogue is not closed. There is still a chance to make a fresh start.