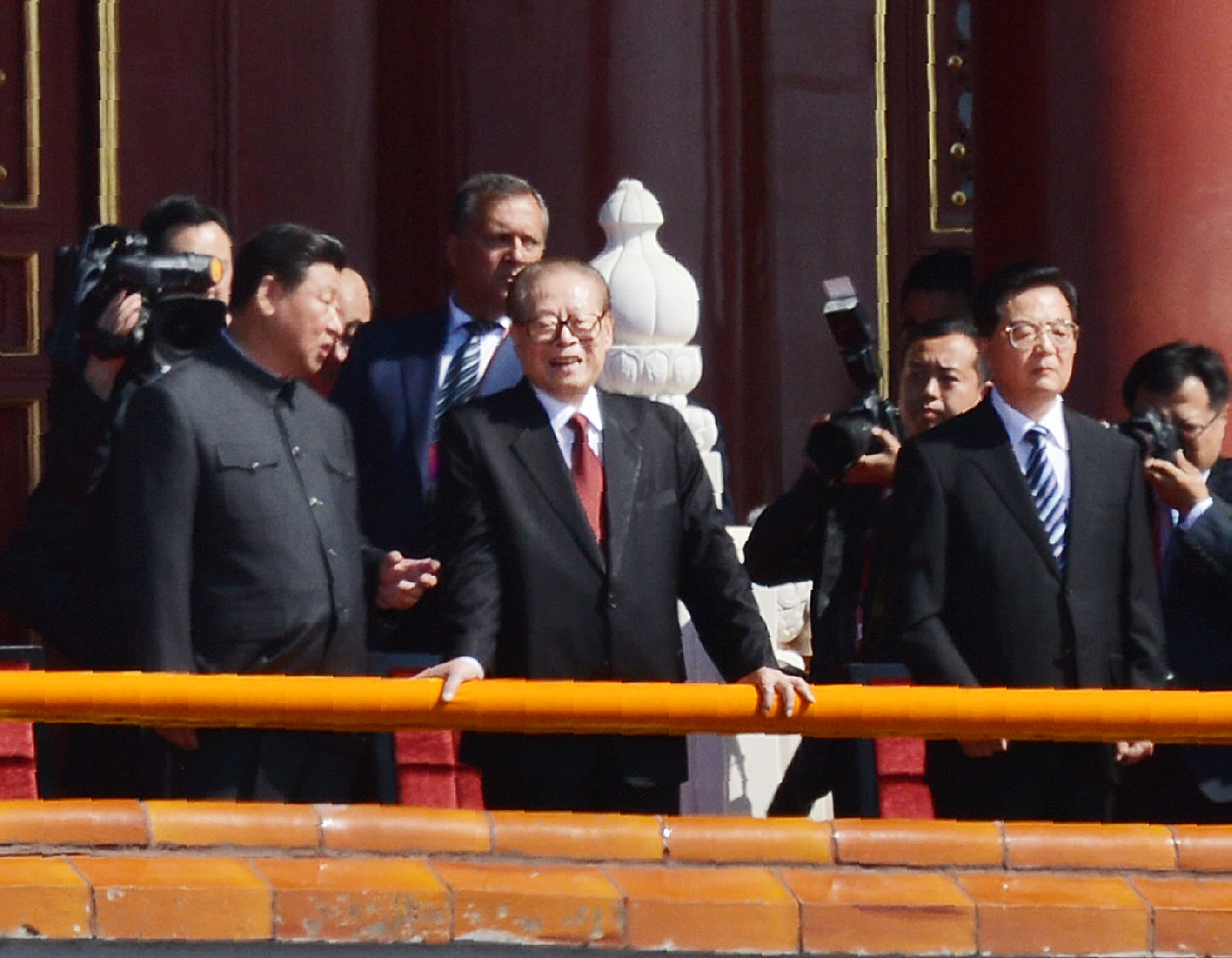 Is Hu Jintao about to go toe-to-toe with Xi?

TOKYO -- The recent Chinese New Year holidays offered no respite from the vicious power struggle in Beijing. On the contrary, the nation was left to contemplate the odds of an all-out battle between the president and his predecessor.

On Jan. 26, the day before New Year's Eve on the Chinese lunar calendar, former President Hu Jintao made a rare public appearance after months of speculation about his health. The 74-year-old's return to the public eye comes ahead of a critical Communist Party congress and leadership reshuffle this autumn.

Many now believe Hu is poised to tussle with President Xi Jinping over the leadership lineup.

At issue is the makeup of the Politburo Standing Committee -- the party's top decision-making body. Most of the current seven members are supposed to retire due to age, though Xi, who leads the panel, and Premier Li Keqiang will stay on. The world will be watching the new appointments for clues about the 63-year-old Xi's potential heir.

Hu made his surprise appearance at a busy flower market in Guangzhou, Guangdong Province. He was accompanied by Hu Chunhua, the 53-year-old party secretary in Guangdong -- the top provincial official. This added extra fuel to the fires of speculation.

Widely seen as a rising political star for many years, Hu Chunhua is one of a few relatively young faces in the spotlight ahead of the leadership changes. Though they are not related, Hu Jintao and Hu Chunhua are often called "Big Hu" and "Little Hu," reflecting their lengthy mentor-protege relationship. 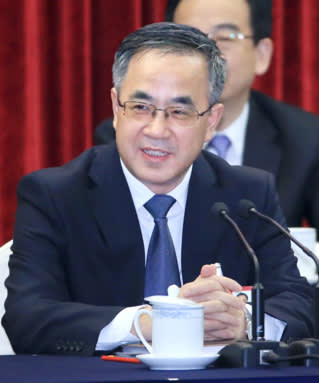 Hu Chunhua, the party secretary in Guangdong Province and a rising political star, attends a meeting in Beijing in March 2016.

Hu Jintao was promoted to party secretary in the Tibet Autonomous Region in the late 1980s. In March 1989, shortly after he assumed the post, massive anti-China protests broke out in Lhasa, the Tibetan capital. This prompted a declaration of martial law, but the future president was suffering from altitude sickness and had to make frequent trips back to Beijing to convalesce. Hu Chunhua, who was in Lhasa at the time as a senior official of the Communist Youth League, offered his support.

After serving as Tibet's top official, Hu Jintao joined the powerful Politburo Standing Committee. Hu Chunhua rose through the party ranks and is now a member of the broader Politburo.

The Politburo has 25 members in all, including the seven on the Politburo Standing Committee. Another up-and-coming figure among the 25 is Sun Zhengcai, the 53-year-old party secretary in the key city of Chongqing. Hu Chunhua and Sun are both considered promising next-generation leaders.

The visit to the flower market caused a stir in China and abroad. Onlookers, who ostensibly just happened to be there, snapped photos of the two Hus, which went viral on social media. But it seems likely that this was a carefully choreographed political stunt.

For one thing, dignitaries like Hu Jintao are typically protected with tight security, making it impossible for ordinary people to approach them.

Xi, quite clearly, is not amused. There have been no official media reports of the Jan. 26 incident in China. And authorities monitoring the internet, who are under the president's thumb, were quick to delete images of Hu Jintao.

In fact, they went even further, blocking searches for the former president's name. Anyone searching for "Hu Jintao" on Chinese social media is likely to see a message warning that the results cannot be displayed in accordance with relevant laws, regulations and policies.

Even in a country notorious for draconian censorship, it is highly unusual to block the name of a former president.

All of this is reminiscent of what happened in January 2015 on Dongshan Ridge, a scenic spot on Hainan Island in southern China. Former President Jiang Zemin climbed the ridge and shouted: "Jiang Zemin came here. It's a worthwhile trip."

Many took this as a call to action -- a call to fight back.

Jiang climbed Dongshan Ridge at a time when members of his Shanghai faction were being swept up in Xi's anti-corruption drive. This campaign has been Xi's primary tool for taking down political foes since he became party general secretary in autumn 2012 and president in spring 2013.

Word of Jiang's message spread quickly. The Dongshan Ridge park put up a post about it on WeChat -- a Chinese messaging app. Media outlets soon carried the story, with photos. Rumors swirled that Jiang was signaling his determination to regain lost political ground.

The choice of Dongshan Ridge was seen as symbolic, due to two episodes in ancient China -- both called "Dongshan zaiqi," or "Dongshan comeback."

One centers on Xie An, a renowned general who returned to defeat a 1 million-man army after secluding himself on Dongshan Mountain, in what is now Shaoxing, Zhejiang Province. The other episode revolves around Li Gang, a government official who made a political comeback after holing up on Hainan Island's Dongshan Ridge.

Alarmed by the attention Jiang was getting, the Xi administration ordered that all related articles and photos be wiped from the internet.

This year, the tug of war between Xi and his rivals is expected to only intensify as the party congress gets closer.

At the party's 2007 and 2012 national congresses, Jiang's Shanghai faction got the upper hand. But Jiang is 90 years old and has lost much of his political influence.

The question is how much power Hu Jintao retains.

On the surface, Hu has taken a cooperative stance toward his successor, Xi. It is no secret that he would like to see his understudy, Hu Chunhua, succeed Xi down the road. But it is not clear whether Hu Jintao still has the muscle to get Hu Chunhua on the standing committee -- an essential step up the ladder.

Hu Jintao suffered serious political setbacks at the 2007 and 2012 congresses at the hands of Jiang's faction. He had envisioned Li Keqiang, who also hails from the Communist Youth League faction, filling his shoes as president. Indeed, Li was initially seen as Hu's most likely successor.

But Hu's hopes were dashed when, in 2007, Xi was promoted to the standing committee post that ranks sixth on the party hierarchy -- one notch higher than Li's position. This made Xi a shoo-in to take over from Hu as the top leader; Li currently serves as premier, No. 2 on the party rungs.

It was Jiang who wanted to prevent Li from rising to the top, in order to curb the power of Hu and Li's youth league faction. This power struggle worked in Xi's favor.

Hu might like to designate Xi's successor, just as the late supreme leader Deng Xiaoping designated him Jiang's heir apparent. But times -- and the party -- have changed. Last October, Xi was named a "core" leader, setting him apart from all but a few revered figures in the party's history.

Lingering health concerns are also a major liability for Hu.

At the military parade China held in September 2015, commemorating the 70th anniversary of its victory in "the war of resistance against Japanese aggression" and the "world anti-fascist war," Xi, Jiang, Hu and other luminaries all watched from the Tiananmen Square rostrum in Beijing. TV footage showed the fingers on Hu's left hand shaking slightly, sparking talk that he might be suffering from Parkinson's disease.

After that, Hu mostly stayed off the radar. His sudden appearance in Guangzhou on Jan. 26 could be taken as an attempt to show he has the strength to support Hu Chunhua. But it was also a gamble that could bring more political pressure on their Communist Youth League faction.

Xi has already tightened the screws on the league. The Communist Party's Central Commission for Discipline Inspection -- led by Wang Qishan, Xi's close ally -- launched an inspection of the youth organization's central committee in autumn 2015.

Last February, when the commission released the findings, it slammed the committee for being "aristocratic" and focusing on "entertainment," among other problems. It also demanded reforms.

Under the circumstances, it seems unlikely that Xi will pay heed to Hu Jintao's wishes when it comes to the leadership shake-up. The success or failure of the ex-president's bid to elevate Hu Chunhua to a Politburo Standing Committee post will also affect Premier Li's political fortunes.

By elevating his own proteges, Xi aims to secure a majority on the standing committee. That, according to an expert on Chinese politics, would give him the final say on important issues.

Assuming the number of standing committee members is left unchanged, at seven, Xi needs at least three allies on board.