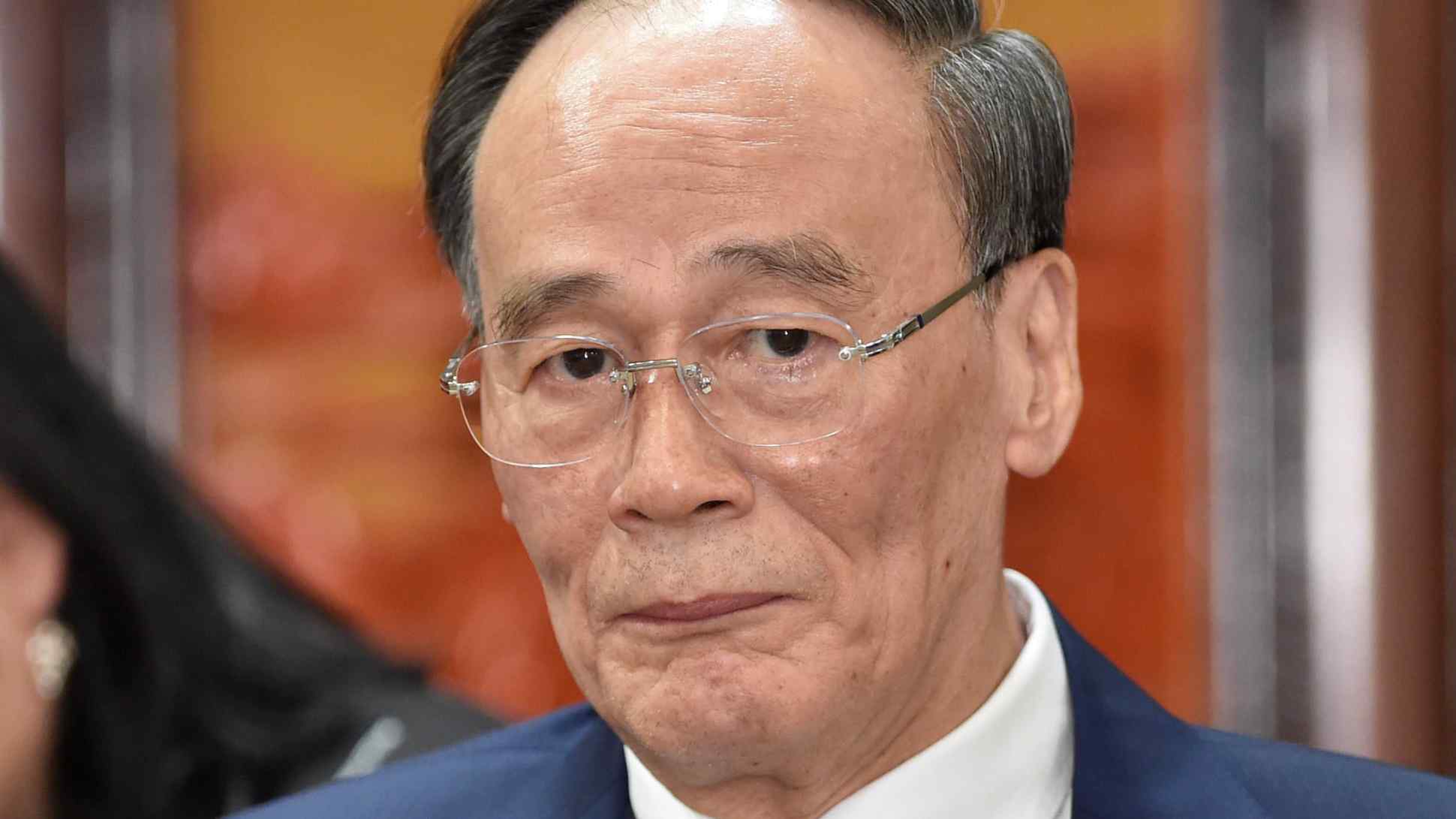 Only Wang Qishan knew what Xi Jinping was going to do

TOKYO -- Everyone got it wrong, said a source regarding Chinese President Xi Jinping's recent political moves. "That includes the young members of the 'Zhejiang faction' who have been closest to Xi over the past year. Only Wang Qishan understood what Xi was trying to do."

The Zhejiang faction is comprised of politicians who spent time with Xi when he was previously Communist Party chief of the eastern province -- such as Chongqing party secretary Chen Min'er -- and are considered Xi's most trusted aides.

"They misunderstood their boss' intention," said the source familiar with the going-ons in Beijing's Zhongnanhai area, where Chinese leaders are based.

The 69-year-old Wang, who had retired from the most powerful seven-member Politburo Standing Committee last October due to his age, was elected to vice president on March 17 by the National People's Congress, the nation's parliament.

The next day, the state-run China Central Television left no doubt as to how powerful the new vice president would be.

While CCTV had previously hinted Wang's return to power by showing his face during the news, this was the first time since the parliament's annual session got underway on March 5 that the TV station had explicitly mentioned the eight names together. 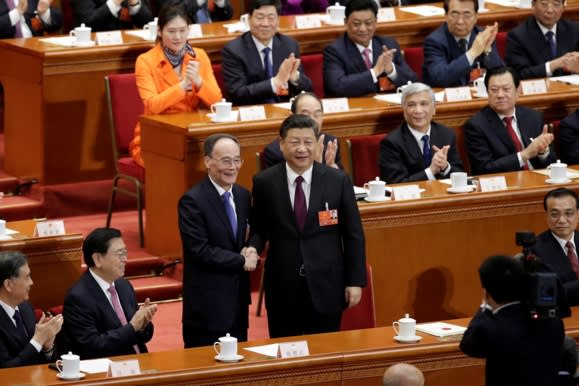 Wang, left, and Chinese President Xi Jinping have known each other for decades.   © Reuters

It is believed that the "retired" Wang is entitled to attend meetings of the Politburo Standing Committee whenever he wants, even though he no longer even sits on the party's much less powerful Central Committee, which has just over 200 members. Wang is also expected to handle negotiations with the U.S.

"In effect, the Politburo Standing Committee now has eight members," a political source in Beijing said. Although Premier Li Keqiang is the second-ranked member of the committee, after Xi, Wang is now widely seen as China's de facto No. 2 man.

Among those who misread the tea leaves, the earlier source said, was Sun Zhengcai, the former Chongqing party chief. 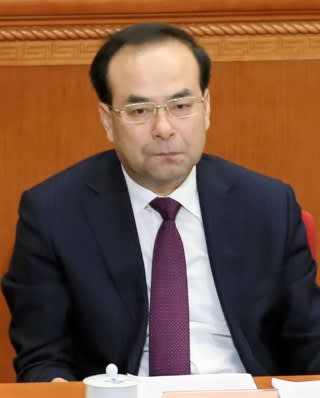 Sun Zhengcai speaks at at the Chinese People's Political Consultative Conference in Beijing's Great Hall of the People in March 2016. (Photo by Akira Kodaka)

Sun, 54, was once widely seen as the front-runner to succeed Xi as the party's head. That coronation might have taken place in 2022.

He did not know that Xi had planned all along to stay in power far further than 2022.

Said a source who knows Sun well: "Behind doors, Sun had blown his own horn, saying he had what it takes to become China's top leader. By doing so, he earned Xi's displeasure. Corruption was not the fundamental reason for his downfall. But he was taking things too easily. He was thinking he was so special that he would be forgiven for some corruption."

Sun's fall in July sent shock waves through China's political circles and elsewhere. Last month it was announced that Sun had been formally indicted on corruption charges.

From their time in a cave

The bond between Wang and Xi dates back half a century. While spending parts of their youth in cavelike dwellings during China's Cultural Revolution, they pledged enduring friendship to each other.

Xi was born and grew up in Beijing. On the advice of his mother, he joined Mao's "Up to the Mountains and Down to the Countryside Movement" at the age of 15 to escape the Cultural Revolution that was raging in Beijing.

The movement was launched in 1968 and lasted for nearly 10 years. It sent numerous "intellectual" city youths to live and work in rural areas.

"Sent down" life was harsh. From 1969 to 1975, Xi resided in Liangjiahe, a poor village in Yanchuan County near Yan'an, a city in Shaanxi Province, central China. 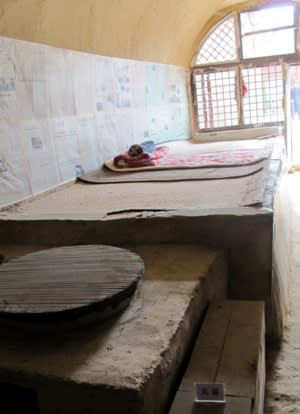 During the Cultural Revolution, Wang would share his spare bedding with a teenage Xi.

In Liangjiahe, along the Loess Plateau, also known as the Huangtu Plateau, Xi lived in cavelike quarters.

After only several months, Xi fled back to his parents' home in Beijing, although he was sent back to the farming village soon afterward, as he himself wrote later.

When he returned to his sent-down life, the teenage Xi visited Wang in Kang Ping, a neighboring village in Shaanxi. Wang had also been sent down from Beijing.

Wang greeted Xi warmly, inviting him to stay in his cavelike abode. The two youths spent a lot of time chatting about China's future. They shared the same thin bedding due to a supply shortage. Wang also lent Xi some of his books, although he himself had few.

Xi is five years younger than Wang. He was born in 1953. For Xi, Wang was a reliable big brother figure.

Wang would give Xi moral support and teach Xi how to survive in the tough climate of the Loess Plateau.

The two pledged enduring friendship and built a deep and strong bond during their sent-down days. Half a century on, Xi is confident that Wang will never betray him.

Five years ago in the village of Kang Ping, where Wang's cave house still exists, an old villager who once cared for Wang and other sent-down youths had a vivid memory of Wang. He recalled Wang as a leading and conspicuous figure among the intelligent youths.

"Wang even brought his girlfriend," the old villager said, referring to Yao Mingshan. Wang and Yao would later marry. Yao is the daughter of Yao Yilin, a late former Politburo Standing Committee member who also served as China's vice premier.

Through his marriage with Yao, Wang joined the ranks of the "princelings" and "second-generation reds." His status as a member of a blue-blood political family significantly helped him rise through the ranks.

Their brotherly bond flashed in public after a meeting at the Great Hall of the People in Beijing in March 2016. The Chinese president had gotten up from his seat and was walking away when Wang patted his old friend on the back to get his attention.

It was highly unusual; no one touches the president in public. Wang Qishan, right, pats his old friend on the back after the opening ceremony for the Chinese People's Political Consultative Conference in Beijing in March 2016. (Photo by Akira Kodaka)

Unlike the younger members of Xi's political group, Wang probably knew Xi had no intention to promote any successor candidates to the Politburo Standing Committee during the party's national congress five months ago.

Now the powerful Xi-Wang team can rule indefinitely, or until their ages allow (Xi is 64).

Article 82 of China's constitution stipulates that a vice president can be commissioned by a president to perform presidential duties. Wang will probably be put in charge of key jobs, including the task of economic diplomacy toward the U.S.

Article 84 stipulates that if the post of president becomes vacant, the sitting vice president is to take over.

If Xi were to travel abroad, grow ill, become unconscious or perhaps pass away, Wang would become the interim leader.

Younger generations of Chinese leaders will run a seemingly endless race to succeed Xi sometime in the future. 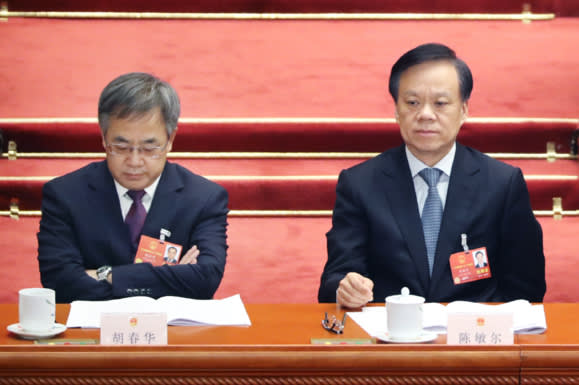 Hu Chunhua, who became one of China's four new vice premiers on March 19, was widely seen as the disgraced Sun's biggest rival in this succession race. Hu may now be able to accept the political reality of no one else stepping up during Xi's new era; he belongs to the rival Communist Youth League faction.

But people around Xi probably have mixed feelings. Even younger aspirants of the Zhejiang faction will now have to fight an endless battle to boost their political fortunes.

And none of them will have a future if they do not remain loyal to Xi. In addition, none of them have any idea when their own era might come.

"Unlike Wang, who shook hands with Xi and looked unusually happy," the researcher said, "Chen Min'er and other Zhejiang faction members who have rapidly gained political ground did not look so happy."