Wang taps Xi on the back; call it fishbowl politics Wang Qishan, right, pats Xi Jinping on the back to get his attention as the two leave the rostrum of the Great Hall of the People in Beijing. (Photo by Akira Kodaka)
KATSUJI NAKAZAWA, Nikkei senior staff writerMarch 11, 2016 19:00 JST | China
CopyCopied

BEIJING -- It was highly unusual: The seven members of the Politburo Standing Committee were leaving the rostrum, and Wang Qishan, China's anti-corruption czar, tapped Xi Jinping on the back to get the president's attention -- then began conversing with Xi as an equal.

What could they have been talking about?

It was March 3. The committee members had just begun the opening session of the annual meeting of the Chinese People's Political Consultative Conference in the Great Hall of the People, in Beijing.

The Politburo Standing Committee is the Chinese Communist Party's top decision-making body. It is led by Xi, who is also the ruling party's general secretary. The Chinese People's Political Consultative Conference? That is the country's top political advisory body. 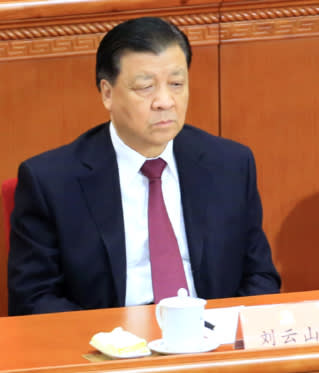 Since being inaugurated, Xi has wielded an anti-corruption campaign against political foes and to help him consolidate power. Perhaps absolute power.

Wang is spearheading the anti-corruption campaign, which has netted one influential figure after another. An old and trusted friend of Xi, Wang also heads the Communist Party's Central Commission for Discipline Inspection, the party's top anti-graft body.

Wang is closer to Xi than any other Politburo Standing Committee member. Certainly, no other member would dare pat Xi on the back in public.

The tete-a-tete that ensued did so in front of more than 2,000 members of the Chinese People's Political Consultative Conference National Committee and some 1,000 media representatives.

Yet the conversation remains hushed; other than the two old friends, no one knows what it was about.

Speculation, though, is rife.

Two theories are worth noting. One is that Wang spoke of how great leaders need to listen to the admonitions of subordinates. The other is that Wang told Xi  the announcement of another key figure being ensnared by the corruption crackdown was to be made the following day.

The first theory is not unfounded.

A trait of great leaders

Shortly before the CPPCC's annual meeting opened, a newspaper controlled by the Communist Party's Central Commission for Discipline Inspection -- remember, this is headed by Wang -- published a delicious article stressing the importance of underlings admonishing their bosses.

The article partly quoted "Records of the Grand Historian," an ancient book authored by Sima Qian, a historian of the Han dynasty.

One of the quoted passages is an axiom of sorts -- 1,000 yes men who blindly follow orders are inferior to just one person of vision who gives straightforward advice.

The article was almost simultaneously posted on an official website overseen by the discipline commission and the Ministry of Supervision.

As examples of leaders and lieutenants who had learned this lesson, the article brings up Shang Yang and one of his confidants as well as Li Shimin and one of his advisers. The Chinese People's Political Consultative Conference opens its annual meeting at the Great Hall of the People in Beijing on March 3. (Photo by Akira Kodaka)

Shang Yang, a figure from the Warring States period, was a 4th century B.C. politician of the Qin state. The Qin state unified China and established the Qin dynasty in 221 B.C.

Li Shimin, or Emperor Taizong, ruled the Tang dynasty as its second emperor in the 7th century. His era, the Reign of Zhenguan, is considered a golden age in Chinese history.

The article talks of the importance of not alienating those who give unpleasant but wholesome advice. It is a trait, the article says, that leaders must learn if they are to attain greatness and earn a place in history.

Today's China is rife with draconian media controls. But does the article represent more than rich irony? Without Wang's approval, it could not have been officially published; it and stories like it would be considered potentially dangerous.

"This highly sophisticated article must be the brainchild of Wang Qishan himself," one Beijing intellectual said.

It immediately went viral, with many online posts citing it in calls for free speech. But some of these online posts were quickly deemed "problematic" and deleted, despite the fact that the article itself reflects the official view of the discipline commission.

Controlling the media is the job of the Publicity Department of the Communist Party's Central Committee and the newly established Cyberspace Administration of China, also known as the Office of the Central Leading Group for Cyberspace Affairs.

The publicity department, which plays a key role in setting the criteria for deleting online posts, is supervised by Liu Yunshan, a member of the Politburo Standing Committee and ranked fifth in the party hierarchy, right ahead of Wang.

Intellectuals and others in China have whispered about the deletion of some online posts that called for freedom of speech, citing the article authorized by the discipline commission.

They generally share the view that Wang and Liu might be at loggerheads over free speech. This consensus conclusion has been spreading through word of mouth rather than on the Internet, where it is best to act like 1,000 yes men and not be immediately squelched.

The Xi-Wang tete-a-tete came as the Communist Party, mostly through its publicity department, has barraged Internet opinion leader Ren Zhiqiang with criticism. Ren, an outspoken property tycoon, is now a darling among Chinese netizens. Some even compare "Big Gun Ren" to Donald Trump, the front-runner in the Republican presidential primaries in the U.S.

In blog posts, Ren has criticized the instructions Xi issued to China's three major state-run media outlets, including the People's Daily, the mouthpiece of the Chinese Communist Party.

Xi made a rare and high-profile inspection tour of the People's Daily, Xinhua News Agency and China Central Television on Feb. 19, demanding they pledge allegiance to the party.

"The media run by the party and the government are the propaganda fronts and must have the party as their family name," Xi said during the inspection tour, as quoted by many media outlets.

Ren responded with some wholesome criticism, arguing that China's media must represent and serve the public's interests. "When all [Chinese] media have surnames and do not represent public interests, the people will be forgotten and abandoned," he said in a blog post.

Like President Xi, Ren is a Communist Party "princeling" -- one of the children of prominent and influential senior Communist Party officials. Ren's father once served as China's vice commerce minister.

After leaving the People's Liberation Army, Ren took the helm of Huayuan Group, a major real-estate developer. He currently serves as a member of the Beijing Municipal Committee of the Chinese People's Political Consultative Conference.

Ren and Wang are close; it can even be said that Ren is a Wang disciple.

In the 1960s, when the Cultural Revolution began sweeping across China, Ren and Wang got to know each other, attending the same junior high school in Beijing, where Ren was Wang's junior.

Wang likely did not directly touch on the issue of Ren during his tete-a-tete with Xi, since Ren is not a member of the party leadership. But Wang may have indirectly defended Ren by citing the article -- the piece was authorized by Wang's discipline commission -- and its message about not alienating those who give bitter but nourishing advice.

Meanwhile, Wang Min, a member of the Communist Party's Central Committee, has become the latest in a series of key figures to fall victim to Xi's blistering anti-corruption campaign. The Central Commission for Discipline Inspection announced on March 4 that Wang Min, who once served as a top official in Liaoning and Jilin provinces, is under investigation.

This situation could also explain why Wang Qishan tapped Xi on the back -- he needed approval to make the announcement at a politically sensitive time.

Xi and Wang Qishan have been close friends for many years. They first met during the 1966-1976 Cultural Revolution, which Mao Zedong, who led China to communism, launched as part of his own power struggle.

During the revolution, Xi and Wang joined Mao's "up to the mountains and down to the countryside" movement.

Launched in 1968, the campaign lasted nearly 10 years. Basically, it was an uprooting of urban, "intellectual youths" who were sent to live and work in rural areas.

Like most other intellectual youths of the time, Xi and Wang lived a "sent down" life. They did so near Yan'an, Shaanxi Province. Xi was born in 1953, and Wang in 1948. For Xi, Wang has been like a big brother; they both lived in "cave houses" during their sent-down days.

Xi would visit Wang, who would give his friend a warm greeting, and often stay over. The two youths spent a lot of time on an ondol floor heater chatting about China's future. They would share the same bedding due to short supplies. Wang would also lend Xi some of his few books. Wang is now a well-known bookworm.

Ren was also "sent down" near Yan'an around the same time.

The previous China up close story, posted on March 4, details how the Southern Metropolis Daily, a newspaper in Guangdong Province, used artifice in placing a headline and caption so that parts of each could be taken together as a criticism of Xi's latest demand on the media.

A female page editor of the newspaper was later dismissed; another editorial executive was also punished. They were accused of lacking political consideration.

The squelching of the media is and will likely remain a big topic of conversation in China.

The clampdown comes ahead of the Communist Party's quinquennial national congress in 2017, where top-level leadership changes will be made. It is closely related to a behind-the-scenes power struggle that is expected to erupt over the leadership changes.