Chinese President Xi Jinping has surrounded himself with faithful 'commoners,' those who have been with him from his days in China's rural provinces.   © Reuters
China up close

Obedience, not bloodline, is the currency that counts in the new team

TOKYO -- A political scholar based in Beijing looked at China's new leadership team and pointed out a hidden feature. "There are few, if any, princelings or members of the second-generation reds in the lineup."

Princelings are children of prominent and influential senior Chinese Communist Party officials. The second red generation, or hong er'dai, is a smaller group of children whose parents joined the revolution prior to the 1949 establishment of the People's Republic and fought against Japan or in the civil war against the Nationalist Kuomintang.

Chinese President Xi Jinping belongs to both and was widely seen to have been supported by this faction in his rise to the helm.

Somewhat unexpectedly, Xi is the only member of the second-generation reds to be sitting on the seven-member Politburo Standing Committee, the Communist Party's top decision-making body, now that his right-hand man, Wang Qishan, has stepped down.

Xi's late father, Xi Zhongxun, once served as Chinese vice premier, while Wang's wife is the daughter of Yao Yilin, who was serving as a Politburo Standing Committee member when the Tiananmen Square protests erupted in Beijing on June 4, 1989.

With the exception of Xi, Zhang Youxia, a 67-year-old general, is the only member of the second-generation reds on the 25-member Politburo.

Why has Xi taken a potentially risky political gamble by alienating his fellow princelings by keeping them on the outside?

Commoners are the new mainstream

Instead, Xi has filled his new team with "commoners," his close aides from his time in China's rural provinces earlier in his career. 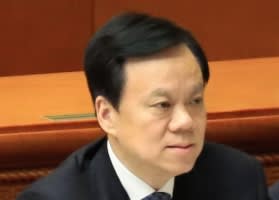 One example is Chen Min'er, 57, who replaced disgraced Sun Zhengcai as Chongqing's top official in July and became a Politburo member in October.

Chen grew up poor in the suburbs of Shaoxing, Zhejiang Province. He worked for Xi when the latter was in Zhejiang between 2002 to 2007. While no blue blood, Chen is seen to be absolutely loyal to Xi.

Another is Li Xi, 61, who Xi recently appointed as the top official of the important Guangdong Province. Earlier in his career, Li was an official in Xi's home province Shaanxi. People take pictures of the illuminated local TV tower during a light festival in Guangzhou, the capital of Guangdong province on Oct. 27, 2017.   © Reuters

It is maybe this appointment to Guangdong, which best symbolizes the new power structure in China.

Xi's rise to power was assisted by the second-generation reds. Shortly before assuming the top party post in the autumn of 2012, Xi abruptly disappeared from the public eye, spending nearly two weeks at a hospital.

Using the hospital stay as cover, Xi actively met fellow members of the second-generation reds, one by one, securing their support for his plans to launch a fierce anti-corruption campaign and a sweeping reorganization of the military.

Xi paid particular attention to the People's Liberation Army. He counted on Ye Xuanning, a key figure among the second-generation reds, to help him take full control of the powerful military.

Ye's father, Ye Jianying, served as a party marshal and became a founder of the PLA along with Mao Zedong. The younger Ye served as head of the PLA's General Political Department, and was a spiritual leader of the second-generation reds.

After helping Xi purge Guo Boxiong and Xu Caihou, former top uniformed military officers, for corruption, Ye Xuanning died in the summer of 2016 at the age of 78.

The Ye family's stronghold is Guangdong Province, and they are prominent in the Hakka community -- Han Chinese who speak the Hakka language.

Now, with the military under his control, Xi sent his confidant Li Xi to Guangdong, the Ye family's power base, to be the party secretary of the province. 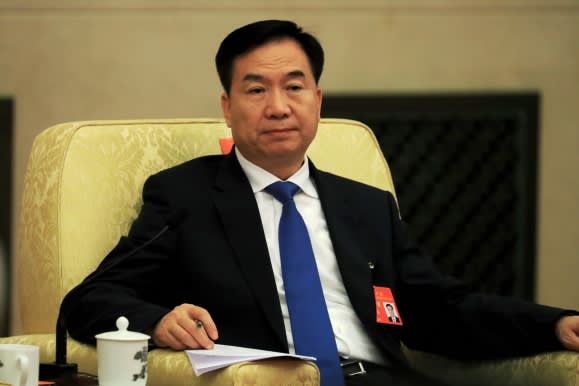 President Xi named Li to take over from Hu Chunhua, a promising 54-year-old member of the Hu Jintao faction, as Guangdong's top official in order to impose, so to speak, direct rule there.

In doing so, Xi also needed to treat the Ye family with the utmost courtesy.

In November, after assuming the top Guangdong post, Li visited a memorial park dedicated to Ye Jianying as well as Ye's former residence in Ye's native Meizhou, a city in the mountains of northeastern Guangdong.

While Li's visit to Meizhou was to pay respect to the Ye clan, it also was meant to symbolize the end of the Deng era and the arrival of a new era under Xi.

The retirement of two generals with the same family name -- Liu Yuan and Liu Yazhou -- has left Zhang Youxia, Xi's childhood friend and new politburo member, as the only influential general from the second-generation reds in the military. Liu Yazhou, 65, is the son-in-law of Li Xiannian, a former Chinese president who is known for his hawkish views. He retired early this year after serving as political commissar of the PLA National Defense University. 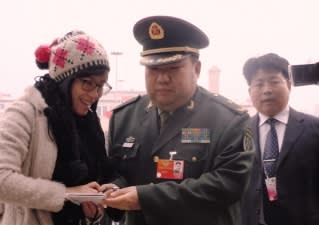 Mao Xinyu, the only legitimate grandchild of founding father Mao Zedong, seen here attending a gathering in Beijing in 2012. (Photo by Ken Moriyasu)

Mao Xinyu, a 47-year-old major general and founding father Mao's only legitimate grandchild, was not elected even as a delegate to the Communist Party's recent national congress.

Xi's snubbing of the younger Mao, a symbolic figure of the princelings, in this way made a splash both in China and abroad. 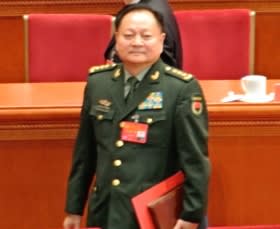 Zhang Youxia, the vice chairman of the Central Military Commission, is close to President Xi Jinping and belongs to the second red generation.

Meanwhile, Zhang Youxia, Xi's childhood friend, is the son of Gen. Zhang Zongxun, a communist revolutionary commander. Xi and Zhang inherited their fathers' close relationship. Xi Zhongxun and Zhang Zongxun were both born in Shaanxi and served in the same military unit.

The younger Zhang sat next to Xi during the military's promotion ceremony, which took place shortly after the national congress. Zhang now controls the powerful Army.

Second-generation reds were more or less unscathed during Xi Jinping's sweeping crackdown on corruption during his first five-year term as party chief.

It would have been no surprise, then, if many positions on the new team were given to the second-generation reds. Instead, the positions were filled by Xi's close aides, or "rural commoners," from the eyes of the princelings. 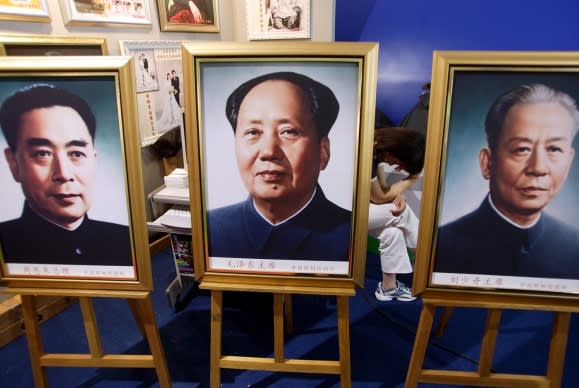 The answer could lie in Xi's father's ranking within the party's mainstream. Unlike revolutionary leaders such as Mao Zedong, Zhou Enlai and Liu Shaoqi, Xi's father, Xi Zhongxun, belonged to the northwest faction, a relatively minor party grouping.

During the 1966-1976 Cultural Revolution, Liu Shaoqi, Liu Yuan's father, was purged and eventually driven to his death. But the elder Liu was ranked much higher than Xi's father.

As the son of a revolutionary leader belonging to such a relatively minor Communist Party faction, Xi may have thought that if he were to keep influential members of the second-generation reds in key positions, he would see his unifying force eroded.

Members of the second-generation reds are too proud to pledge absolute obedience to Xi. In the new regime, the currency that counts is obedience, not bloodline. Instead of turning to fellow princelings, Xi chose to promote his close aides and friends from rural areas.

Among those promoted in the military are Miao Hua, Han Weiguo and Ding Laihang, who have close links to Fujian Province, where Xi worked for nearly 17 years in various party and government posts.

Last month, when Xi had his ideology go into the party constitution with his name attached to it, he was elevated to a much higher status than his two immediate predecessors, Jiang Zemin and Hu Jintao-- and possibly to a higher status than Deng Xiaoping himself.

The christening of Xi's eponymous ideology at the party congress has received a cool response from some princelings and members of the second-generation reds, who doubt that Xi's achievements really match or even surpass Deng's.

Another troubling phenomenon, for the princelings, is the practice of publicly praising Xi across the country. The Communist Party explicitly introduced a ban on "any form of personality cult," after Mao's death to prevent the recurrence of the disastrous Cultural Revolution. 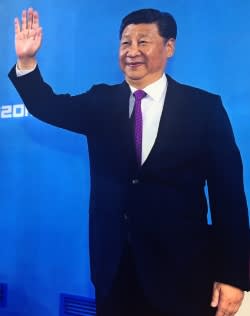 Many of the second-generation reds remember being persecuted during the Cultural Revolution, and the exhibitions showcasing Xi's achievements and a song that seems to rhapsodize over the leader have alarmed them.

In vaulting into his own era, Xi has created a new challenge -- coping with discontent among, and a possible backlash from, his fellow princelings. Beware the storm ahead. 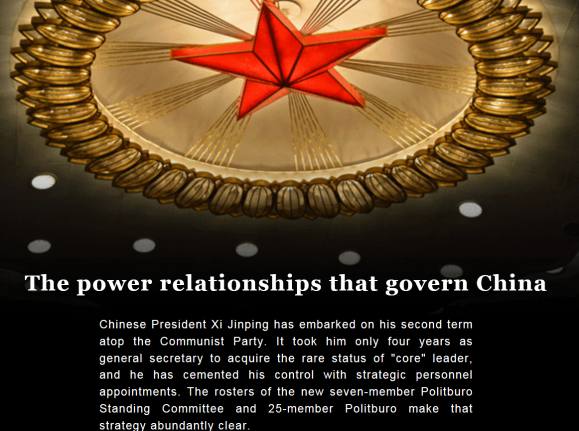 Click here for a look at China's new leadership.