TOKYO -- Just before the start of the Lunar New Year celebrations on Monday, an important political event took place in China.

Huang Xingguo, a close aide to President Xi Jinping and acting party secretary of Tianjin, appeared before the media for the first time since a series of explosions at a chemical warehouse in the port city south of Beijing killed or injured nearly 1,000 people. He broke his silence on Jan. 8 with a bold statement at a meeting of local officials.

"We must protect General Secretary Xi at all costs," Huang said, calling him he xin ("the core"). In short, Huang's words are an acknowledgement that Xi has abandoned the party's collective approach to leadership, putting himself in complete control.

Huang owes his position to Xi, whom he served when Xi ran Zhejiang Province. Although his career was tarnished by the Tianjin explosion, Huang, with his fulsome praise for the president in January, repaid his debt to his patron. A big unanswered question is whether Huang will be promoted at next year's Communist Party Congress.

The history of China's ruling party is marked by the struggles of its top officials to become the he xin. In 1989, paramount leader Deng Xiaoping appointed Jiang Zemin, seen as a dark horse in the leadership race, as general secretary in the wake of the Tiananmen Square massacre.

To add to Jiang's prestige, Deng positioned him as the he xin of the third generation of revolutionary leaders. Deng was merely "first among equals" in his own generation. He was anxious to squelch the cult of personality that led to the chaos of Mao Zedong's Cultural Revolution between 1966 and 1976.

Although Hu Jintao, Jiang's successor, served as president for 10 years, he was not considered "core." He had neither the power nor the zeal to claim that title.

Jiang resigned as general secretary in 2002 and president in 2003, but he remained chairman of the military commission, giving him a great deal of behind-the-scenes influence over Hu. Jiang finally stepped down from China's top military post in the autumn of 2004 but remained he xin until November 2012, when Xi took the helm of the party. Even after relinquishing his formal titles, Jiang continued to control personnel affairs in the party and held sway over much of the economy.

Xi wanted to avoid Hu's fate. The new leader launched an anti-corruption campaign aimed at cutting Jiang and his supporters down to size. Ultimately he wanted to depose Jiang as he xin. Huang's Jan. 8 statement set off a chain reaction, with declarations of fealty to Xi coming from the leaders of Sichuan, Anhui and Hubei provinces, all of whom referred to him as he xin.

As a result, senior members of the Communist Youth League of China, which had previously kept its distance from Xi, had no choice but to side with the "princelings" -- children of top party elders, of whom Xi is the most prominent member.

The finishing touch was applied by Li Zhanshu, chief of the General Office of the Communist Party, who said public awareness of the he xin must be raised. A close aide to Xi, Li played an important role in placing Zhou Yongkang, a former senior party leader and heavyweight in the Jiang faction, under house arrest. Zhou, the former head of the party's central security bureau, was later convicted of bribery and abuse of power, and sentenced to life in prison.

Xi began working behind the scenes to become the core leader in the second half of 2013, after Zhou lost his freedom. After returning from a meeting in Beijing, a provincial leader told local officials that Xi had already become the he xin. That was an insurance policy: By declaring Xi was the he xin, he might be able to retain his position and shield himself from the anti-graft onslaught.

This year, with his position secure, Xi announced a "great reform" in Beijing on Feb. 1, consolidating China's seven "military regions" into five "battle zones." Xi also issued a directive to military leaders, urging them to raise awareness of the he xin concept in each region and ensure the military's total compliance with the party's commands.

Xi's speech was a virtual declaration of victory over Jiang, not to mention Hu. As the focal point of his presentation, Xi used the term he xin himself. Jiang did not wrest that title from rivals; he received it from Deng. Xi's explicit use of the words was a conscious effort to make himself equal to the late Deng. 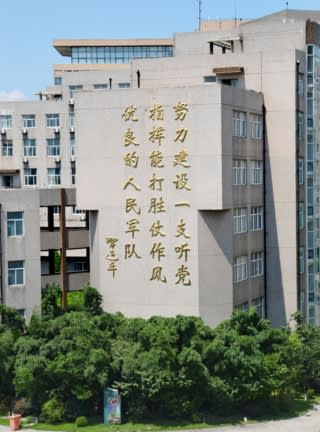 Xi's calligraphy is displayed on a wall at a People's Liberation Army school in Shanghai.

Writing on the wall

This unprecedented move was a blatant attempt to clip the wings of Jiang and his followers. Xi also underscored the principle of party control over the military, a tacit admission that it had lost its grip during the era of Jiang and Hu.

Xi had already taken down two former senior officers closely associated with Jiang: Xu Caihou and Guo Boxiong, who were vice chairmen of the Central Military Commission, charging them with corruption. The crackdown on the military strengthened Xi's grip and allowed him to carry out a major military reorganization.

With the creation of the northern, eastern, southern, western and central battle zones and 15 departments, Xi was able to place his own people in those positions. The changes may cause grumbling, but to challenge Xi will be to invite a corruption investigation. Xi has thus cemented his hold over the military, but it will take time for him to replace senior officers loyal to Jiang and Hu with his own people.

The slowing Chinese economy may also affect Xi's power base. Having laid claim to the he xin title, Xi faces a test at the party congress next year, a senior party official said. Xi can prove his supremacy over Jiang if he is able to form his own leadership team.

Major political incidents have occurred ahead of party meetings in the past. Chen Liangyu, for example, was dismissed as Shanghai's party secretary in a struggle that took place in 2006 and 2007, and Bo Xilai, former party chief of Chongqing, was sacked in 2012. The party get-together will be a chance for Xi to show what he intends to do with his newfound power.