One middle-aged Beijing resident who likes to talk politics seems upset at the current situation. His father served in the military but was forced to retire early under a personnel reduction program. "It is supposed to be a military for the people, but the children of those who once held high positions are assured of smooth promotion -- as if they were going up an escalator -- while the children of commoners are eliminated as weeds, eventually," he said. "It is strange that there are people who were born with silver spoons in their mouths in a communist-ruled country."

The biggest weeds pulled up this year were disgraced senior officers, including Xu Caihou and Guo Boxiong, former vice chairmen of the Central Military Commission. Xu died of cancer in March. Xu's father was a farmer from a poor part of northeastern China, while Guo's father died young; his mother went through many hardships to raise him.

Zhou Yongkang, a former member of the Politburo Standing Committee, the Communist Party's top decision-making body, was sentenced to life in prison in June this year after being found guilty of bribery and other crimes. Zhou was also born to a humble farming family in Wuxi, Jiangsu Province. The family had only a small plot of land and fished for Asian swamp eel, a local specialty, in a nearby river to make ends meet.

To be sure, Xu, Guo and Zhou were rough around the edges and tainted by corruption. But they were tough. They scrambled to the top of the military and Communist Party through hard work.

In modern China, having parents with the right connections is the strongest asset one can have.

The highest rank in the People's Liberation Army is general, followed by lieutenant general and major general. 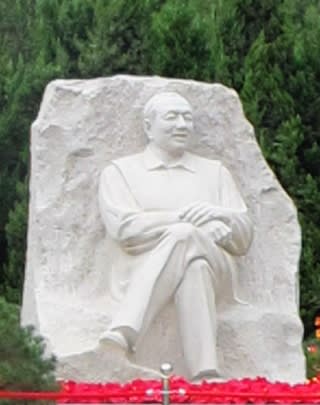 There are a total of 38 serving generals in the PLA, including 21 who were promoted after Xi took charge of the armed forces as chairman of the Central Military Commission just over 1,000 days ago. Xi became secretary-general of the Communist Party in the autumn of 2012. As he took the reins of the party, he simultaneously became chairman of the Central Military Commission. He assumed the post of Chinese president in the spring of 2013.

Xi's rise coincided with that of the second red generation, including some generals whose fathers were also high-ranking officials.

One typical member is Zhang Youxia, director of the PLA's General Armaments Department. Zhang commanded troops during the 1979 Sino-Vietnamese War and the 1984 Sino-Vietnamese border clash. He is one of the few serving Chinese generals with combat experience.

Zhang Zongxun, Zhang Youxia's father, was born in Shaanxi Province. Shaanxi was also the home of Xi Jinping's father, Xi Zhongxun, who once served as China's vice premier. When they were young, Xi Zhongxun and Zhang Zongxun served in the army and belonged to the "northwest faction" in the Communist Party.

Another serving general who has reached the same lofty rank as his father is Zhang Haiyang. His father, Zhang Zhen, died Sept. 3 at the age of 101. Zhang Haiyang is a former political commissar of with PLA's Second Artillery Corps, which controls the country's nuclear missiles. He currently serves as vice chairman of the Legal Committee of the National People's Congress, China's parliament.

Zhang Zhen's four sons all joined the military and all made general. Zhang Haiyang, Zhang Zhen's third son, is the best known. Zhang Zhen's son-in-law is a major general.

In modern China, it is unusual to have so many generals in a single family. "Even if they are all competent, it is doubtful whether their promotions were purely based on their performance," said one elderly former service member.

Gen. Liu Yazhou, the political commissar of the National Defense University, who is known for his hawkishness, is also the son of a revolutionary-era soldier. Liu's wife, Li Xiaolin, is the daughter of former Chinese President Li Xiannian. Li Xiaolin serves as the president of the Chinese People's Association for Friendship with Foreign Countries.

There is one more incumbent general who should never be forgotten. Gen. Liu Yuan, who serves as the political commissar of the PLA's General Logistics Department, is the son of Liu Shaoqi, a former Chinese president.

In the 1966-76 Cultural Revolution, which Mao Zedong launched as a campaign against his political foes, Liu Shaoqi was purged and eventually driven to his death.

His son, Liu Yuan, is an ally of Xi. Liu has played a key role in the president's efforts to consolidate his grip on the military. When they were young, they faced similar hardships. Xi's father, Xi Zhongxun, also incurred the wrath of Mao Zedong and was purged. The elder Xi spent a long time in exile before being fully rehabilitated. This changed the younger Xi's life and helped forge his bond with Liu Yuan.

Before becoming head of the party and the Central Military Commission, Xi met separately with Liu and other members of the second red generation. During the secret talks, Xi received pledges of support from Liu and other key members of the group for his soon-to-be-launched anti-corruption campaign. Xi has used the anti-graft drive to wage war against Zhou Yongkang and other political foes, terrorizing many in the party and the military.

Generals and other officers belonging to the second red generation are the big winners of this struggle within the military. They are increasingly influential within the institution.

Xi has succeeded in purging one political rival after another in his anti-corruption campaign, but he has also made many enemies. Now he can trust only old associates.

On Sept. 3, Xi presided over a massive military parade in Beijing aimed partly at showing off his iron grip on the military. But he still fears for his physical safety. His efforts to flush out disgruntled members of the military will continue.

The fourth plenary session of the 18th Communist Party of China Central Committee was held in Beijing in October 2014, after authorities announced the investigation of Xu Caihou. The fourth plenary session of the 18th Communist Party of China Central Committee took place in Beijing in October 2014. (Xinhua/Kyodo)

Before the party meeting, there was speculation that two generals from the second red generation who are particularly close to Xi -- Zhang Youxia and Liu Yuan -- might be promoted to vice chairmanships of the Central Military Commission, the highest post for a uniformed officer. But that did not happen at the 2014 meeting.

The next plenary session of the Central Committee is due to begin Oct. 26. Attention will be focused on the appointment of replacements of committee members and others who have fallen victim to Xi's anti-corruption campaign. Personnel changes in the military, including in the Central Military Commission, may also be made.

Ahead of the meeting, many people with ties to Zhou Yongkang have been punished or sentenced. The hastily arranged crackdown on Su Shulin, governor of Fujian province, has drawn particularly strong attention. The 53-year-old had, up to now, been seen as a rising star in the so-called oil faction.

Zhou was the faction's leader. Like Zhou, Su once worked at the Daqing oil field in Heilongjiang Province and served as a senior executive at China National Petroleum Corporation.

The Central Political and Legal Affairs Commission supervises the judiciary and the public security apparatus. There are growing calls for the powerful commission to be reformed.

The Xi government has taken a series of steps against people with ties to Zhou Yongkang, partly in a show of force against malcontents in the Communist Party. The biggest question now is whether Xi will further consolidate his power at the upcoming party meeting or run into resistance from party elders and military officers.

In any case, the second red generation will have to be watched closely as it will play a big role in the future of Chinese politics.