SEOUL/SHANGHAI -- "We'll give you an additional discount of 7,000 yuan ($1,035) on top of the 20,000 yuan," salesman Zhao Wenxi told a potential customer in mid-July at a Shanghai dealership of South Korea's Hyundai Motor.

The popular Tucson SUV model that Zhao was trying to sell has a list price of 170,000 yuan, but he is offering a total discount of 15%. Other models in the dealership also can be bought for less than the advertised price. 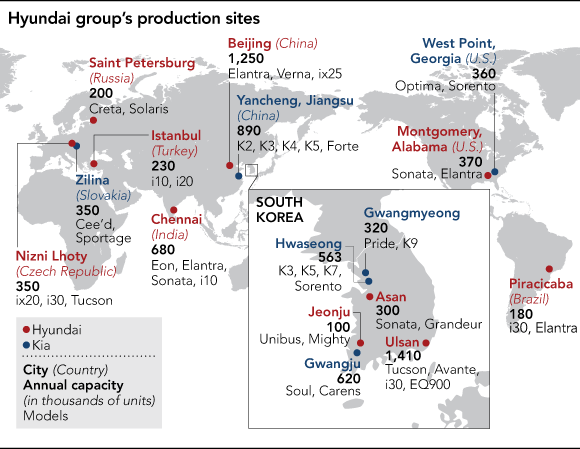 Hyundai is feeling the fallout from a political dispute between Beijing and Seoul over South Korea's deployment in April of a U.S. missile defense system, known as Terminal High Altitude Area Defense, that has led to a widespread boycott of Korean products in China. "The impact from THAAD is serious. But we still have to keep increasing unit sales," said a salesman at a Hyundai dealership in Beijing.

Hyundai's sales in China have dropped since April, with June sales 62% below those of a year ago. The dire situation has led several Hyundai salesmen in Beijing to quit. Sales in July have recovered slightly, but Hyundai is also facing fierce competition from Japanese cars and high-end Chinese models.

Hyundai has long ranked third in auto sales in China after Volkswagen and General Motors. But the plunge in sales threatens Hyundai's market position. Hyundai sold around 35,000 vehicles in June in China and its affiliate Kia Motors some 17,000. Hyundai Motor is the flagship affiliate in the Hyundai Motor Group, which was formed in 1998 after it took over the bankrupt Kia Motors in the wake of the 1997 Asian financial crisis. The group's other subsidiaries include Hyundai Mobis, an auto parts company, Hyundai Steel, and Hyundai Glovis, a logistics company.

China is Hyundai Motor's most important foreign market, with sales of about 1.8 million units last year, accounting for more than a fifth of group sales worldwide. The company set a 2017 sales target for China of 1.95 million earlier this year.

In the previous decade, Hyundai gained a big foothold in China when it secured major vehicle orders from Beijing taxi companies via a partnership with BAIC Motor, one of China's biggest state-owned automakers. Its influential local partner, however, has not been able to shield the joint venture from the THAAD repercussions.

Some analysts say that strategy mistakes by Hyundai have helped cause the company's decline in China, the world's largest auto market. "GM, Nissan and Toyota launched inexpensive models in China to compete effectively with local brands. But Hyundai had no such strategy," said Kim Pyeong-mo, an analyst at Dongbu Securities in Seoul. With Hyundai sales tumbling in China, this Shanghai dealership has been dangling discounts in front of potential customers. (Photo by Shunsuke Tabeta)

Cho Cheol, a researcher at the Korea Institute for Industrial Economics and Trade, said that Hyundai has failed to keep up with the fast changing Chinese auto market. "The sharp drop in sales of Korean auto brands is not simply due to the THAAD effect. We believe there is a wide range of factors, such as changes in the auto market structure in China, the rise of local automakers and the increased competitiveness of Japanese brands," said Cho.

The quality and safety of cars produced by Chinese automakers has improved since 2012, while their price has fallen, making them more competitive against foreign brands. Japanese brands are focusing on the premium market with luxury sedans, while South Korean automakers remain in the medium car segment.

In response to the sharp sales drop in China, Hyundai and Kia in June set up a joint task force at their headquarters in the Yangjae district of southern Seoul. It is staffed by 100 members from the development, marketing and sales departments, who will propose ways to revive growth, according to the company. Hyundai said that 2017 sales in South Korea fell because sales for 2016 were boosted by tax cuts on vehicles, while it is also suffering from sluggish demand in the U.S. and Europe. In the second half of 2017, Hyundai hopes to increase sales with the launch of a new compact sport-utility vehicle, the Kona.

But young South Koreans prefer foreign car brands, unlike their parents who bought Hyundai cars for "patriotic" reasons. Foreign cars, particularly German brands like BMW and Mercedes-Benz, are likely to increase their market share as they become more affordable to those in their 20s and 30s. This will threaten Hyundai's dominant status in its home market. President Moon Jae-in's promise to phase out private diesel cars by 2030 will eventually affect German car imports. As of now, however, the imports are denting Hyundai's share of the South Korean market. The automaker had a 41.2% slice of its home market in 2016, down from 46.8% in 2014, according to the Korea Automobile Manufacturers Association. Analysts say the reason for the shrinking Hyundai sales is the lack of new car models. "Hyundai's key models in the U.S. market are the Sonata and Santa Fe, but they are outdated since the latest versions were launched three or four years ago. But its competitors are releasing new models, including Toyota which plans to launch a new Camry in July," said Kim at Dongbu Securities.

The figures are particularly disappointing since Hyundai increased discounts in May by 53% to $3,220 from a year ago, according to Autodata. But sales dropped 15.5% during the same period. Analysts say the rise in marketing expenses and discounts will reduce profits margins for Hyundai's U.S. subsidiary.

In addition, Hyundai suffered a serious blow to its reputation last year when the company agreed to pay $41.2 million in fines for misleading statements about fuel economy performance that it made in 2012. In the settlement with the U.S. federal government and 33 states, Hyundai had to revise downward the stated full economy for a quarter of its cars released between 2011 and 2013.

"Since the fuel economy issue had popped up, sales of Hyundai Motor in the U.S. market have been stagnant or declined," said Lee Sang-hyun, an analyst at IBK Securities. "Hyundai could not claim anymore that it produces the best fuel-efficient models in its class."

Hyundai also faces the longer-term challenge, like other automakers, of the switch from gasoline-fueled cars to electric vehicles and autonomous driving. Chung Eui-sun, who is expected to succeed his father, Chung Mong-koo, as chairman, is leading the company's future strategy planning by cooperating with key global players.

"We have good relationships with global IT companies, such as Cisco, Baidu and Uber and will strengthen our ties further," said Chung in a press conference in June. "Through these connections, we will increase our competitiveness in the connected car and autonomous driving sectors."

But analysts believe the company needs more drastic change. "Currently, the business structure of the Hyundai Motor Group still relies heavily on fossil fuel car technology and its two automaker affiliates, Hyundai and Kia," said Yim Eun-young, an analyst at Samsung Securities. "It is time to adopt a flexible business structure that can cope with new industry trends."

Nissan and Google are seen as the global leaders in the development of autonomous driving technology. Nissan has been developing self-driving cars since 2007 when it launched the Advanced Technology Center. Google is also a leader because of its Google Map application that has detailed information about roads, buildings and landscapes all over the world. 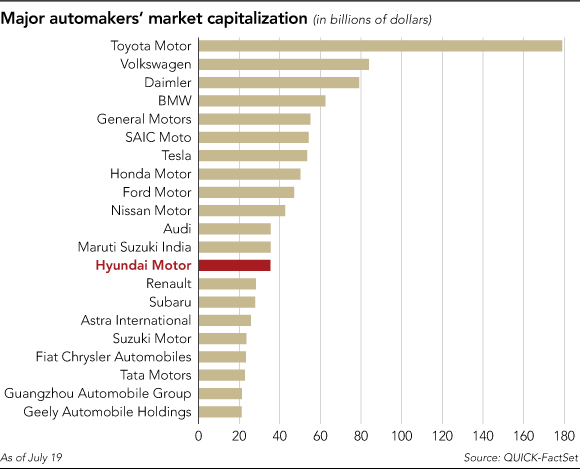 One of the biggest hurdles blocking changes at Hyundai Motor is its strong and stubborn trade union, according to Song Ho-keun, a sociology professor at Seoul National University. He criticized the company's unionized workers for being paid too much while taking no responsibility for the company's poor performance.

"The union is free riding on net profits earned at foreign plants while its workers enjoy some of the highest wages in the country," said Song in his recent book, "The Road Less Traveled: South Korea's growth engine and the Hyundai Motor story."

In mid-July, the union's 48,000 members voted by 66% in favor of a strike over this year's wage demands. They want a 7.2% pay increase as well as collecting bonuses that amount to as much as 30% of net profit.

The union is also seeking guarantees preventing job cuts despite increased automation at the company's car plants, which is seen by critics of the union as an irresponsible and selfish demand. But the union believes that it has the government on its side with the recent election of President Moon Jae-in, who has promoted labor-friendly policies.

Moon, who was a human rights lawyer before entering politics, has been an advocate of trade unions since the 1980s and often refers to union leaders as "comrades." He has vowed to tame the country's huge family-run conglomerates, or chaebol, including Samsung and Hyundai Motor, to pave the way for corporate governance reforms. Hyundai Motor was founded by Chung Ju-yung in 1967, with the goal of producing cars with home-grown technology, and it launched its first model, the Pony, in 1976. In 2000, the company split from its parent Hyundai Group after the industrial empire dissolved in a family dispute.

Since then, Chung Mong-koo, a son of the founder, has led Hyundai Motor, making it the fifth-largest automaker in the world. His 47-year-old son, Eui-sun, is preparing to take over the company. He accompanied President Moon on his visit to the U.S. in late June along with other corporate leaders. He also introduced the Kona in a launch ceremony in June, wearing a Hawaiian shirt since the name of the new sports utility vehicle is borrowed from an area on Hawaii island.

It is too early to forecast how Eui-sun will meet the challenges facing Hyundai Motor, but his leadership indicates he is a person who understands the industry's changing trends and one who has a consumer-friendly approach.