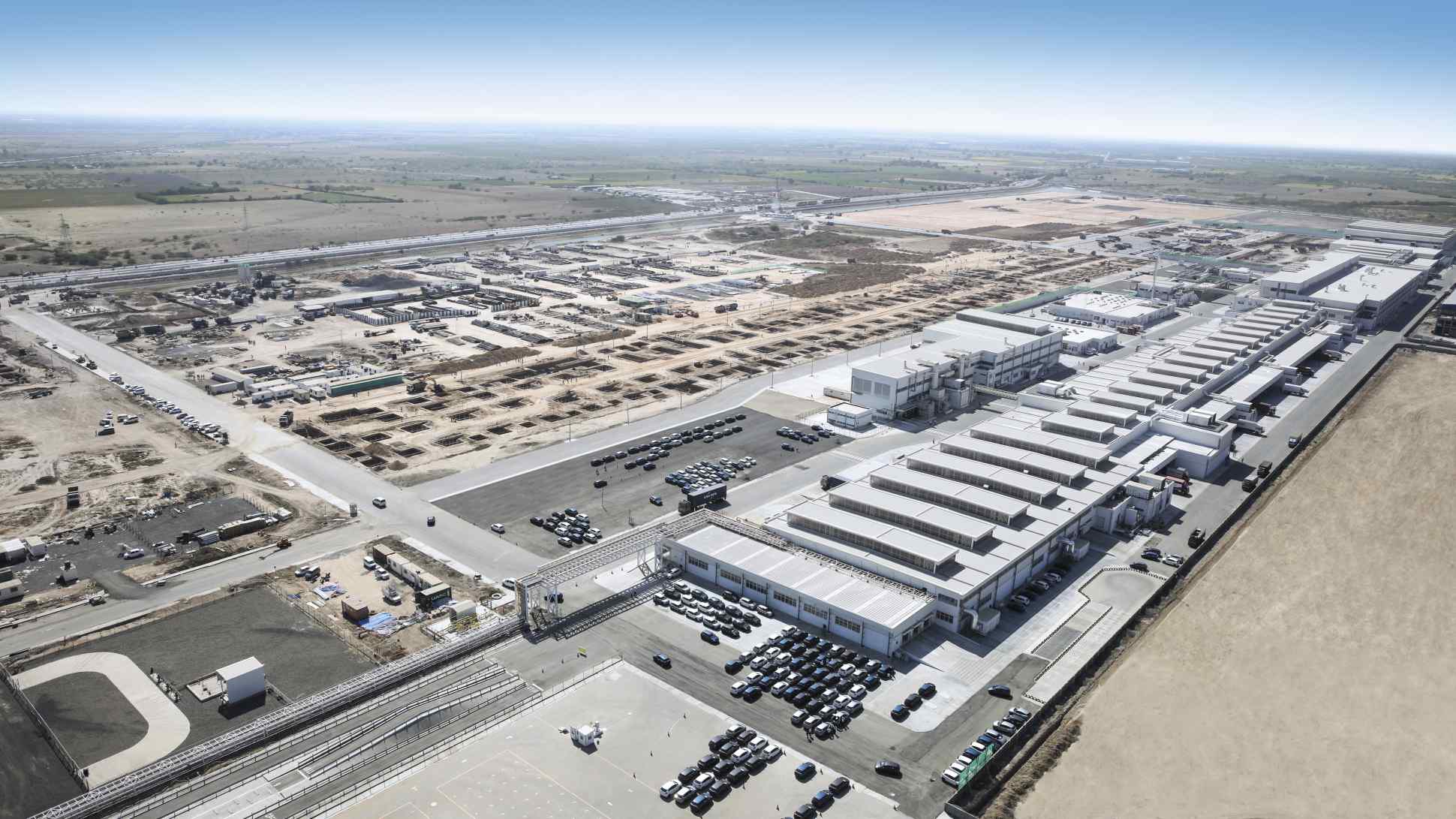 Suzuki's new factory in Gujarat is capable of churning out 250,000 cars a year.
Business

Suzuki Motor is trying to strengthen the unit, but it may encounter pushback

MUMBAI   In 2016, India ranked fifth in global auto sales, at 3.6 million units, coming just behind Germany. A big chunk of those sales came from Maruti Suzuki India, which sold 1.4 million cars to grab about 40% of the domestic market. A local unit of Suzuki Motor, Maruti is spearheading the Japanese company's emerging market strategy and opening up new frontiers in the fast-expanding Indian automobile segment.

One of those new frontiers is a dusty playground of an elementary school in the tiny western Indian village of Saigaon. There, a gaggle of children surround a shiny new car, intently drawing pictures of it. The focus of their attention is an Alto 800 hatchback, a recent low-cost offering by Maruti. In place of the car's license plate is a placard bearing the name of the model. It is written in Marathi, the local language. A Maruti marketing event in March invited children in the tiny village of Saigaon, in the western state of Maharashtra, to draw pictures of the Alto 800 hatchback. (Photo by Takafumi Hotta)

"I want to use the kids' drawings to convey to the villagers just how nice the car is," said Gawade, a Maruti salesman in his 20s who is there to oversee the marketing activity. Gawade knows this particular market especially well, as he was born in Saigaon, located in the state of Maharashtra.

There are just 22 cars among the 350 households in Saigaon. But Maruti is working hard to put more locals behind the wheel. Three months ago, it established a small dealership there. A handmade map on the wall of the showroom pinpoints the locations of schools, clinics and irrigation in the area, including nearby villages. The map also highlights which villages are seen as promising markets. The information was gathered by salespeople making the rounds in a truck carrying precious cargo: a small Maruti car.

"The market for farmers is about to take off, so these sales activities form the foundation of our future growth," said Takahiko Hashimoto, Maruti's executive officer responsible for marketing and sales. He said the company began ratcheting up its rural sales efforts in 2012, working with villagers and dealers to create a database covering 600,000 villages. That database, Hashimoto said, helps the company understand what kinds of cars will sell.

Maruti Udyog -- Maruti's predecessor -- was established in 1981 as India's first state-run automaker. It was under the direct supervision of India's Ministry of Industry. Suzuki Motor became an investor in 1982, when the Indian government and the automaker agreed to form a joint venture to produce Suzuki cars. Today, the Japanese company holds a 56% stake in Maruti.

Maruti's sales have grown in step with the motorization of Indian cities. That growth is quickly spilling out beyond the metropolises and into the country's vast rural expanses, where nearly 70% of the population lives.

The potential for expansion is massive: In a country of 1.3 billion people, the automobile penetration rate is a mere 25 cars per 1,000 people, just a quarter of China's figure and a twenty-fifth of Japan's. Farming villages are fertile -- and largely uncultivated -- ground.

Maruti is not wasting time. "We are the front-runner in tapping demand in farming villages," said Maruti Chairman R. C. Bhargava.

But Maruti is by no means ignoring urban drivers. To capture demand among younger city-dwellers, the company has launched a chain of premium car dealerships called Nexa. It began opening the outlets in the summer of 2015, with the number since increasing to about 250. Those dealerships now rack up sales of 150,000 cars a year, including the Baleno compact hatchback.

The top four market players in India are Maruti, Hyundai Motor, Mahindra & Mahindra and Tata Motors. All are well-entrenched and hungry for a bigger slice of the pie. Their main battlefield has been the low-cost segment -- cars priced around 300,000 rupees ($4,667). But as urban incomes rise, more people are looking for higher-end offerings. Nexa is targeting this segment. The Baleno, for example, starts at a costlier 550,000 rupees. Its main rivals include Volkswagen's Polo and Hyundai Motor's Elite i20, both superminis. A salesperson shows the Baleno hatchback to customers at a Nexa showroom near Mumbai. (Photo by Takafumi Hotta)

Nexa dealer S.K. Wheels opened a showroom near Mumbai. "The Nexa experience is attracting young people who were not interested in Maruti cars," said Akshit Kumar, the dealer's manager in his 30s. The black and white interior of the showroom is sleek and classy, and the sales staff use tablets when presenting the cars to customers.

Nexa sales currently make up only about 10% of Maruti's total unit sales, but "we aim to increase that to 20-30%," Hashimoto said. With figures like that Maruti is clearly no bit player for its Japanese parent. Other numbers are equally impressive: Suzuki's Indian production capacity of 1.75 million vehicles a year far outstrips the 1.05 million cars it can make at home. In terms of market capitalization, Maruti caught up with its parent in around 2015 and now easily surpasses it.

But Suzuki is determined to make Maruti even stronger. In February, the western Indian state of Gujarat celebrated the opening of a new automobile factory capable of churning out 250,000 cars a year. A second production line will be opened as early as the start of 2019 and will turn out the same number of cars as the first one.

That kind of scale is necessary if the Suzuki-Maruti group is to accomplish its ambitious goal of producing 2 million vehicles in India by 2020. It is not an unrealistic target, though; India is the only major auto market still logging annual double digit growth, and Maruti sees the Gujarat plant as a means of capturing a bigger slice of that market.

Visitors will note, however, that the factory is curiously devoid of the Maruti logo. That is because it is operated by Suzuki's new wholly owned subsidiary, and the production lines were developed entirely by the Japanese company. Suzuki has earmarked some 94 billion rupees for the facility, which is packed with the latest production hardware.

Suzuki Chairman Osamu Suzuki later explained that his decision to set up a separate unit was based on a somewhat ruthless 30-year vision. "To face up to intense competitive challenges, we don't have the luxury of letting our guard down," Suzuki said. "I want Maruti and the new company to compete against each other to see which one can make a better car."

The shift began after a deadly clash in 2012 between workers and managers at Maruti's Manesar plant, in the northern state of Haryana. In March 2017, a court convicted 31 former employees in connection to the incident, in which at least one person was killed.

The Suzuki chairman said arrogance and carelessness among certain Maruti managers gave rise to the labor unrest. In 2010, shortly before the labor problems came to the fore, Maruti was in a festive mood, having finally achieved its goal of selling 1 million cars in India. Around that time, the chairman was not fully briefed on the resentment that had been festering among some workers. He later discovered that Maruti management was dealing with the problems unilaterally without consulting the Japanese headquarters, and handling them in a way that he did not endorse.

Another factor driving Suzuki to strengthen its control of Maruti is the fast-changing competitive environment. On March 10, for example, Germany's Volkswagen and Tata Motors agreed to explore a strategic partnership aimed at seeking out new opportunities in India.

Suzuki and VW once had an alliance: In 2009, the automakers had agreed to jointly develop a range of products. Just two years later, however, the partnership ended, with Suzuki taking their dispute to the International Court of Arbitration. Now VW is looking to a rival to build up its muscle in India.

But the Suzuki-Maruti team has a possible answer to that threat, with the Japanese company announcing in February that it had formed a partnership with Toyota Motor.

Toyota and Suzuki are looking into jointly developing environmental and safety products, and also advanced technology such as self-driving cars, and they see India as a potential market for their undertakings.

India, for its part, wants cleaner and safer cars. To step up its battle against air pollution, the government has introduced strict environmental regulations on a par with those of developed nations, and it will begin gradually toughening safety rules this autumn.

Maruti's technological and development capabilities have improved. Its Indian engineers were involved in the entire process of designing the exterior for the Vitara Brezza compact SUV launched in 2016, a first for the company. The locally developed SUV was chosen as the Indian Car of the Year 2017. The injection of Toyota's advanced technology into India via Suzuki will further hone Maruti's competitive edge, helping Suzuki use the Indian automaker as a springboard to global markets in the future.

But increasing its influence over Maruti is a double-edged sword for Suzuki. Maruti shareholders and employees, for example, initially bristled at the idea of letting Suzuki's wholly owned company operate the Gujarat plant. Maruti and Suzuki have overcome many obstacles together, but a change in governance style may bring tension.

Ashwin Patil, a research analyst at LKP Securities, said, "We need to see what kind of management changes happen [at the Gujarat plant] and what kind of change that brings. Japan is a bit of a taskmaster, and you never know what that will lead to."

There could indeed be friction, but perhaps Maruti, which refers to a Hindu wind deity, will live up to its name and take the world by storm.