HONG KONG -- Amid frenzied outbound investments by mainland Chinese companies in 2016 the most voracious cross-border dealmaker by number of deals was a hospitality, aviation and finance conglomerate based in the southern province of Hainan.

HNA group splashed at least $26 billion on 21 deals, becoming the largest non-state outbound investor from China, ahead of internet company Tencent Holdings and the property and leisure conglomerate Dalian Wanda Group, according to data from Dealogic. Most recently, HNA bought UDC Finance, an asset finance business divested from Australia's ANZ Banking Group, and -- just six days later, on Jan. 17 -- majority stake in SkyBridge Capital, a fund of hedge funds run by U.S. financier Anthony Scaramucci, which had $12 billion in assets under management as of Nov. 30. The group is also in final talks with a German state government to buy Hahn airport, 120km from Frankfurt. 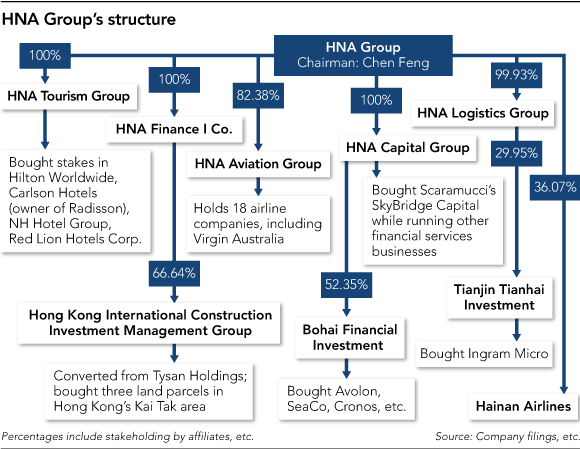 HNA group's merger and acquisition activities have grown exponentially since 2015 following its establishment of a deal-making department in Hong Kong. But the group was founded in 1993 as a joint-venture between Hainan Province and private interests led by Chen Feng, a former People's Liberation Army Air Force employee, with the aim of easing transport bottlenecks in Hainan, according to the Harvard Business Review.

The joint-stock enterprise was based on a newly-created regional flight operator, Hainan Provincial Airlines, which is now China's fourth largest domestic airline by fleet size under the name Hainan Airlines. Chen, who had also worked for China's Civil Aviation Administration, was asked to lead the project with $1.4 million of government seed money.

In 1995 U.S. hedge-fund magnate George Soros invested $25 million in the fledging carrier through an entity called American Aviation, which was sold in 2014 to Grand China Air, also led by Chen and partly state-owned.

Born in 1953, in Shanxi Province, to a middle-ranking Communist Party official, Chen was raised in Beijing. He won a 1984 scholarship to study at Germany's Lufthansa College of Air Transportation Management, and worked briefly in the World Bank's loan office in Haikou, Hainan's capital, in 1989. 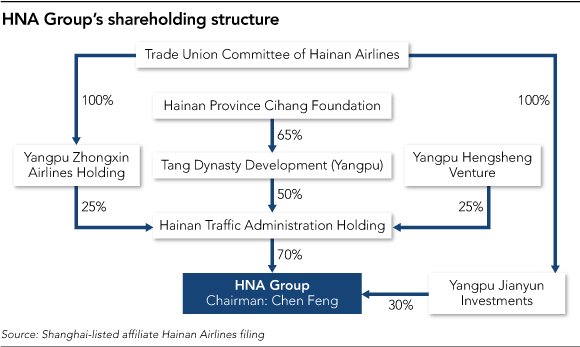 In the mid-2000s, Chen converted to Buddhism and made the religion part of HNA's culture, setting up a charity called the Hainan Province Cihang Foundation in 2010 with a 20 million yuan ($2.9 million) "donation" from HNA Group. The charity displaced Trade Union Committee of Hainan Airlines to become the ultimate owner of HNA Group in late 2015.

Politically, Chen is extremely well connected, having been a delegate to three national congresses of the Chinese Communist Party since 2002, spanning the presidencies of Jiang Zemin, Hu Jintao and Xi Jinping. Held every five years, the conclave is tasked with picking the country's leadership.

He is also highly ambitious. In February 2016, he told students at Harvard University: "HNA, ambitiously, is looking to become a company of 1.5 trillion yuan in revenue in five years, of 5 trillion yuan in 10 years ... That means being a top-10 company in the world." "Their strategy is a combination of vertical integration and overseas expansion, to eventually piece together a global tourism and transportation conglomerate," said Binglin Wang, an analyst at Red Pulse, a Shanghai-based consultancy. However, HNA's buying spree may be frustrated in the medium term by tougher capital controls imposed since November by the Chinese regulator in a bid to stall outflows stemming from yuan depreciation fears. 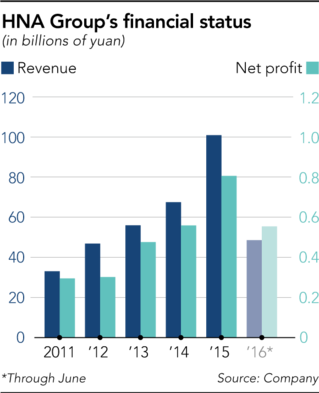 It was against this backdrop that HNA outbid dozens of developers between November and January to buy three residential land parcels in Hong Kong's Kai Tak urban renewal area for 19.74 billion Hong Kong dollars ($2.54 billion). One piece was bought at a premium of 87% to the upper limit of market valuations.

Some observers, including Shirley Yam, a columnist for the Chinese-owned South China Morning Post, have suggested that the land purchases may have been a vehicle for moving funds out of mainland China. As Yam points out, buying land auctioned by the Hong Kong government could appear legitimate to the Chinese regulator, and by pledging that same assets against fresh debt the company could raise additional funds for overseas investment.

This mechanism is common among mainland companies trying to move funds abroad, said Philip Zhong, a senior equity analyst at Morningstar. But the gross overpayment struck him as non-economical. "One overpays a little to make sure the auction would be won, but not so much overpaying" said Zhong, adding that buying income-generating assets would have been more sensible. "It could have to do with the speed with which the company wants the deal to be closed," said Zhong.

In the same period HNA also snapped up controlling stakes in several obscure companies on the Hong Kong bourse, including Advanced Card Systems Holdings, a smart card manufacturer, Jia Yao Holdings, a packaging business, and KLT International, a jeweler. All had been listed on the main board for less than three years, and were bought through three different offshore entities.

"They probably want to have some additional avenues for raising capital in the public market, or to have some assets in some other unlisted vehicles injected into listed vehicles," said Edward Tse, founder and CEO of Gao Feng Advisory Company, a Beijing-based management and strategy adviser.

Tse said HNA group's deal-making intensity was "impressive," but "risky." "When you put companies together, there are always lots of glitches to walk through. But if you don't [manage to] put the companies together, you may not get the scale advantage that you thought you might have," said Tse. HNA declined to comment when reached by the Nikkei Asian Review. However, the group has a long history of using the assets of acquired companies as collateral for fresh fund raising. Its 2016 half-year report notes that 28.7% of its assets were "restricted" due to borrowings as of June.

Its shareholdings in some subsidiaries were also pledged. For example, HNA Holding Group had 56.11% of its share pledged on Dec. 2 and closed a deal to buy eight golf courses in Washington State, in the U.S., two weeks later, according to filings to the Hong Kong stock exchange.

HNA Group's bonds outstanding totaled $54.25 billion as of Feb 9. In addition, it has obtained 539.8 billion yuan in credit lines from banks, including the policy lender China Development Bank, state-owned China Construction Bank, and Industrial Bank. Nearly 45% of this is untapped, according to the company's half-year report for 2016.

The group has reported a declining leverage ratio over the past few years, to 74.77% at the end of June 2016, along with a shifting composition that has entailed a few dozen new entities being added or removed from its consolidated statements every year. Its intricate corporate structure comprised 454 entities as of 2015, according to a report by Shanghai Brilliance, a Chinese credit rating agency. Numbers appearing through official disclosures may not sufficiently reflect the entire operation.

HNA Group never lacks credit because its entities act as guarantors for each other. HNA Hotel Group Holdings, for instance, has guarantor liabilities of 8.28 billion yuan, representing 206.2% of its total assets. "All guarantees are [related to] HNA entities, which subjects the company to default risks," Hu Changsen, an analyst at Pengyuan, a Chinese credit rating agency, wrote in a bond tracking report on Dec. 16.

Hu highlighted that most of the prime assets of the hotel holding unit had been pledged, while account receivables (funds owed to the company) were rising fast. "The counter parties were all affiliates ... Repayment schedule was thus highly uncertain," said Hu, adding: "Selling shares [in its affiliates] to other affiliates has become the company's main income source."

Although it does have real operating assets, the cash that HNA Group has generated from financing activities, totaling 32.09 billion yuan as of June, is almost three times the comparable figure for its operating activities.

On Jan. 11, Moody's, an international credit rating agency, assigned a junk-status Ba3 corporate family rating to Avolon, which was acquired by HNA's Shenzhen-listed Bohai Financial Investment, also known as Bohai Capital, in 2016. With Bohai's financial support, Avolon announced in October that it would buy its U.S. peer CIT in a move that would make it the world's third largest aircraft lessor.

Moody's said its rating of Avolon was "constrained by parent Bohai Capital's modest credit profile," which Moody's characterized as "high leverage, reliance on short-term financing and high debt-funded growth." It also noted that a $2.4 billion capital injection from Bohai into Avolon was financed in part with borrowed funds, with the implication of "significant double leverage" for Avolon. Bohai said in a filing that its "restricted" assets were more than three times its total net assets as of September.

Mark Wasden, a senior credit officer at Moody's, said that "capital and liquidity strength should reside at the Bohai level," as Avolon and other subsidiaries were all ultimately reliant on recourse to HNA group. Will Horton, a senior analyst at the Centre for Aviation, a Sydney-based consultancy, said that volume growth in China would continue, but HNA would likely face challenges in securing traffic rights in 2017. HNA is known to have fewer state privileges than the country's Big Three state-owned airlines.

"Traffic rights to key markets have been exhausted," said Horton, adding that HNA has a large widebody aircraft backlog. He also said HNA needs to improve coordination among its many airlines.

Amid growing problems of excessive leveraging and lack of transparency in the Chinese economy, HNA group's operations look increasingly like a smaller version of the issues facing the country. From now on, questions about its financial engineering are likely to mount, especially if the group continues its rapid expansion.