Robots covered in plastic sheets are seen at a plant of Kuka Robotics in Shanghai.   © Reuters
Economy

Rapidly growing appetite for industrial robots in China is set to hasten the decline in manufacturing jobs, according to the findings of an FTCR survey.

As part of a top-down push, local governments are subsidising companies to produce and purchase robots, while most companies reported productivity gains and forecast a reduced need for frontline workers.

This is not a zero-sum game: companies also cited a growing need for more skilled workers. This is creating demand for vocational skills and the robot revolution will be able to absorb only a minority of such workers.

The increasingly rapid adoption of industrial robots on Chinese production lines is set to hasten the fall in manufacturing employment. Among companies that intend to purchase robots in the coming 12 months, 72.7 per cent said this would mean job losses, according to an FT Confidential Research survey conducted across manufacturing centres in Guangdong in the south and Zhejiang on the east coast.

Industrial automation is seen as both an answer to China's falling working age population and a path to the kind of innovative, efficient economy that the leadership is trying to nurture. The government is aiming for a "robot density" of 150 units per 10,000 workers by 2020, up from 49 in 2015.

Predictably, this has triggered a funding frenzy among local governments, which may be keen to follow the leadership's line on industrial policy but also need little excuse to funnel state funds to companies in their region. But China's robot revolution is about more than unaccountable bureaucrats throwing subsidies at state firms.

By 2019, the International Federation of Robotics believes China will account for 40 per cent of the global market for industrial robots, from just over 12 per cent in 2010 (see chart). 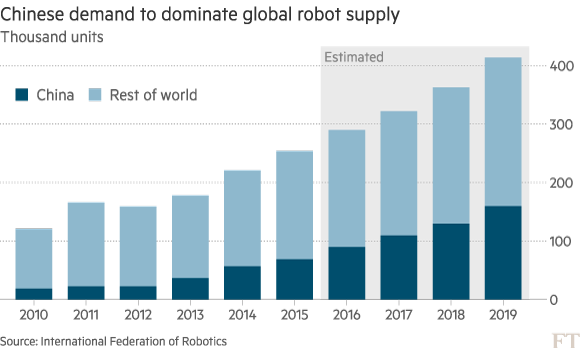 Of the 30 companies surveyed by FTCR, 77.4 per cent said the costs associated with installing robots on production lines were recouped within three years. Among respondents, 41.9 per cent estimated they had spent more than Rmb10m ($1.5m) on robots for their factories, while 38.7 per cent said their purchases were subsidised by the government. In Zhejiang, for example, the provincial government offers subsidies of up to Rmb2.5m for companies to purchase robots.

The installation of robots helps companies address the pressures of rising wages. FTCR's survey of labour demand has found manufacturing wages increasing every month since it began in June 2012, although wage pressures are clearly easing (see chart). But most companies surveyed also reported clear operational improvements following the installation of robots, with 96.8 per cent saying productivity increased - and by an average 27 per cent - while 77.4 per cent reported a drop in unit production costs.

Henghui Furniture in Dongguan, a manufacturing hub in Guangdong province, cut 40 of its 200 positions over the past two years after installing four robotic arms. Henghui general manager Lu Binxin says the robots have created payroll savings of Rmb1.9m a year, equivalent to the cost of the equipment. Profits rose more than 10 per cent last year, up from annual increases of 5-10 per cent before the robots were installed, Lu estimates. The Guangdong branch of the Development Research Center, a State Council-level think-tank, estimates that robots reduced labour demand by 40,000 positions a year in Dongguan between 2014 and 2016.

Local governments are encouraging downsizing, at the expense of migrant workers, as part of the centre's push for a more efficient economy. In Zhejiang, the government plans to cut 500,000 manufacturing jobs per year, partly through industrial automation. A provincial government official acknowledged that its robot subsidy programme is partly intended to encourage unskilled migrant workers to return home.

Workers at Xinwei Plastic in the eastern city of Tiantai went on strike at the end of 2015 in response to plans to cut a third of the workforce after introducing five handling robots. Desperate to end the dispute and restart production, management negotiated early retirement packages for eight of the workers slated for redundancy, referred 20 to a neighbouring factory and bought out another 10.

Central and local governments also see robots as an answer to China's demographic constraints. The country's working age population has already begun falling and is expected to continue dropping until 2050 (see chart). Manufacturing is still the biggest employer by sector in China, although the numbers employed in this sector have fallen by 0.79 per cent per year on average over the past three years. 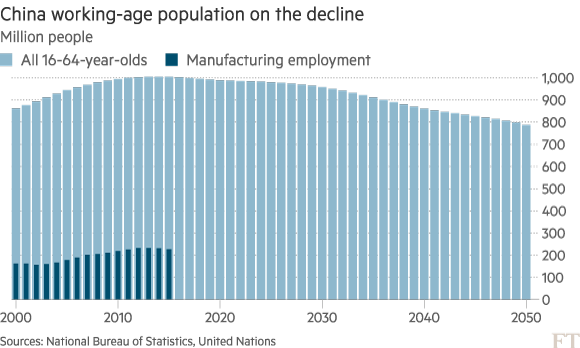 The threat of robot deployment will continue to fuel labour disputes on the shop floor, although 60 per cent of companies surveyed said workers lost through automation were redeployed or retrained.

Wuhan-based Jointown Pharmaceutical Group, one of China's largest drug distributors, has cut the number of workers at its central warehouse from over 100 to just 13 since automating operations in 2012. Redundant staff have been sent to work for new Jointown branches across Hubei province.

"Robots have allowed us to store and deliver the same amount of goods with fewer people," said Zhang Qingsong, Jointown vice-president. "But business is growing so fast that we need more workers to perform those duties that robots can't."

A dozen workers lost their jobs in 2015 after Hubei-based Tianrui Electronic automated potting, which makes electronics resistant to shock or vibration. Instead of laying them off, Tianrui enrolled unemployed workers in a training programme and made them quality inspectors.

Such new demand in the labour market may help to absorb a minority of positions lost on production lines. Zhitong, a labour exchange in Dongguan, reported a threefold jump in robot-related job postings in 2016 from the previous year. Our survey found 80.6 per cent of companies reporting a drop in the number of frontline workers employed following the deployment of robots on production lines, but the same proportion said the number of technical staff either stayed the same or increased.

Robot-related positions require specialised knowledge of machinery and programming and this has resulted in a shortage of skilled labour. Zhitong routinely advertises positions ranging from maintenance worker to programmer, paying between Rmb10,000 and Rmb15,000 a month compared with Rmb4,000 for unskilled workers.

This has led to a training boom across China's factory towns as migrant workers scramble to try to master robotics. Chuancai Securities, a Chinese broker, estimates the vocational market for training in robotics could grow to Rmb28bn by 2021, from Rmb7.5bn in 2016. In Dongguan, a 400-place training course offered by Yucai Vocational and Technology School sold out in a week. Pan Qingxiu, Yucai's principal, said many of his students were from factory production lines.

Lu Zide, a 29-year-old electrician, left an Rmb8,000 a month position for a course at Yucai. "I want to become a robotics engineer. This is where the future lies," he said.

But not everyone succeeds. Zhang Jiawei, a 25-year-old migrant worker from Sichuan, left a production line to enrol on a Rmb5,800 Yucai coding course but failed the English and mathematics components required to pass.

He is back on the production line but knows the higher salaries are with the robots.

This article was first published on Feb. 24 by FT Confidential Research.