FT Confidential Research's latest consumer brands survey found that Uniqlo remains the most popular casualwear brand among China's urban consumers, with 19.3 per cent of respondents saying it was one of the two brands they most regularly purchased, up 1.9 percentage points from the fourth quarter of 2015 (see chart). 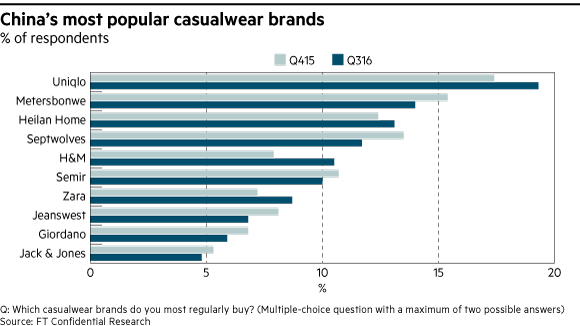 The popularity of Uniqlo and other fast-fashion brands is rising in China despite official data pointing to a broad industry slowdown. Growth in retail sales by large apparel companies grew 6 per cent in the same period, the slowest pace of growth in a decade (see chart). Importantly, the popularity of fast-fashion brands has now spread beyond China's richest urban centres (see chart). Uniqlo is well-established in China's first-tier cities - 24.9 per cent of these respondents selected the brand - with much of its improvement in our latest survey coming from second- and third-tier city respondents. Brand popularity rose 3.7 percentage points in second-tier cities compared with our last survey at the end of 2015, and 2.4 percentage points in third-tier cities. Uniqlo's parent company, Fast Retailing, operated 472 stores in China at the end of August, up from 387 a year prior (see chart) and intends to open 100 stores a year in China, including those of youth-oriented brand GU, until it hits 1,000 stores. It eventually hopes to raise its store count to 3,000. China contributes half of its global revenues. Expansion beyond first-tier cities does not equal automatic success. Although their popularity is increasing, it remains to be seen if lower-tier city demand will be sufficient to justify such rapid storecount growth. Urban disposable incomes in the provinces can be roughly half those of Beijing and Shanghai, while our monthly survey of Chinese households across all city tiers has consistently found sentiment towards clothes buying in lower-tier cities weaker than that of higher tiers (see chart). 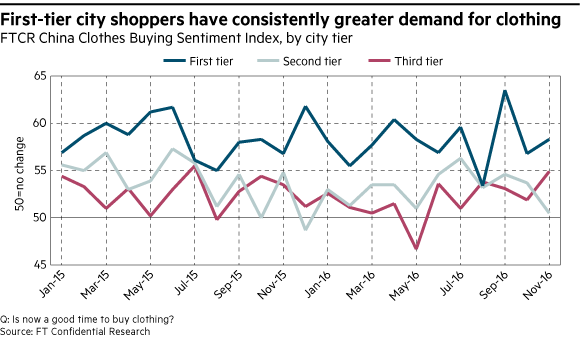 These companies may pride themselves on the affordability of their product, but a Uniqlo down jacket still costs around Rmb160 ($23) more than one sold by Shanghai-based Metersbonwe, which held on to second place overall in our brand survey.

In the provinces, mall operators see a prominent 1,000 square metre-plus Uniqlo or H&M outlet as a way to attract foot traffic and are willing to offer more favourable terms to win tenancies. Rent discounts and other perks may lure these brands, but they also highlight the urgency among operators to fill empty commercial space born of China's shopping mall building boom.

While Zara can get products through its supply chain in as little as three weeks, Chinese brands operate under more traditional design and marketing models, with products taking up to nine months to reach the market.

Many leading domestic brands operate, or have franchised out, thousands of stores in downtown commercial centres across the country. They face serious challenges in integrating these outlets into a consolidated sales channel capable of moving quickly enough to compete with the likes of Uniqlo.

They have begun upgrading their IT infrastructure and trying to improve their retail space to make their supply chains and retail channels more responsive to changing market trends and customer feedback. But this is a transition that also requires shuttering smaller street-level or department store franchises in favour of larger, more standardised outlets.

For example, Semir has started closing stores under 100 square metres in size and opening bigger outlets of 300-800 square meters, to improve the retail experience and centralise data collection. Heilan Home, most of the stores of which are located on ordinary streets in lower-tier cities, is also planning a move into the shopping mall, with most of its newly opened stores measuring above 200 square metres and in first-tier cities.

Drab clothing or outdated styles will continue to keep customers away, however, while high rents will force closures. Metersbonwe founder Zhou Chengjian has acknowledged his company started its more recently launched Me&City brand with an eye on Zara. These stores are directly operated and focus heavily on an online-to-offline model to drive sales.

But it has failed to win over consumers: in FT Confidential Research's survey, only 0.4 per cent of respondents said Me&City was one of their top two casualwear brands, down from 0.9 per cent in our fourth-quarter 2015 survey. The company last year closed its 2,000-square metre flagship on Shanghai's popular Huaihai Road, and later shuttered its store on Wangfujing, Beijing's most famous shopping stretch.

Several Chinese clothing firms are therefore turning to overseas brands as a shortcut to better designs and brand recognition. Shenzhen designer and manufacturer Ellassay acquired the design, pricing, production rights and all of the mainland stores of Munich-based Laurel in 2015. It followed up this year with the purchase of a 65 per cent stake in the China subsidiary of US brand Ed Hardy and later became a shareholder in French brand IRO.

This trend is likely to continue. Acquisitions such as these will help local firms improve design and marketing, a key weakness. But successfully integrating these purchases to be in a position to take on the fast-fashion giants will be highly challenging. Even established brands such as Abercrombie & Fitch and Gap have struggled. A viable Chinese competitor may emerge, but that prospect, for now at least, seems distant.

This article was first published on Dec. 15 by FT Confidential Research.