Indonesia's government is garnering praise from international investors for its pro-business stance, and the growing strength of President Joko Widodo augurs well for future economic reforms. But mining and energy policy continues to cast a cloud over the investment environment.

Almost three years after implementation Indonesia's 2014 ban on the export of several metal ores (including nickel, bauxite and copper) has failed to achieve its stated objective of spurring investment in domestic refining capacity in bauxite and copper, although it has had some success in nickel.

This mixed success reflects the fact that Indonesia's 2009 mining law - which legislated the 2014 ban - failed to take account of the different characteristics of each mineral, in terms of where the greatest value-add lies in the supply chain.

Investment flows into Indonesia's mining sector tumbled as a direct consequence of the law (see chart), while exports of minerals have shrunk to negligible levels. Importers from China - the main source of demand - have turned to Malaysia to source bauxite and to the Philippines for nickel. 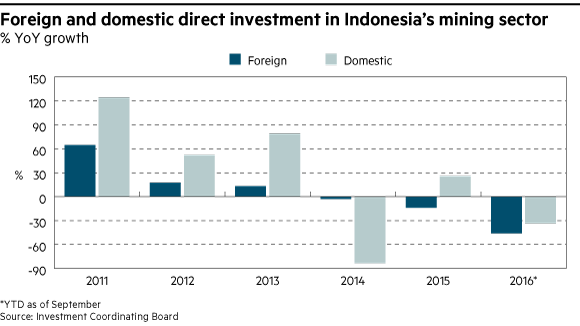 And the policy's restrictions are set to become even more onerous for the industry: from January 2017 only shipments of fully refined metals are allowed, tightening from the current law that also allows partially processed metals.

Ban unlikely to be reversed

Government officials have sent conflicting messages about the likelihood of a reversal of the ban, but we think it will remain largely in place. FT Confidential Research recently spoke with Coordinating Economic Minister for Maritime Affairs* Luhut Pandjaitan - who oversees the Energy and Mineral Resources Ministry - and believe that the government will:

Mr Pandjaitan's authority on this and other energy policies has grown in recent months. Although Igansius Jonan, a former Transport Minister, was unexpectedly awarded the position of Energy and Resources Minister in mid-October following a reshuffle, we believe Mr Jonan's lack of experience means that it is Mr Pandjaitan who calls the shots.

One reason why backtracking on the nickel export ban does not make sense is that the current policy has spurred investment. About 20 companies, many Chinese, have committed to investing $6bn in processing facilities over the last five years. Such investments have resulted in the complete construction of 12 smelting facilities (see chart). China remains short of domestic supplies of nickel ore, while Indonesia is one of few global suppliers. Chinese companies have agreed to comply with the ruling in order to secure supply chains.

Another reason is that investing in nickel smelting in Indonesia is commercially attractive. Nickel mining costs just 2-3 per cent of its ultimate market value. Loading large barges for processing in China is inefficient relative to producing onshore in Indonesia and transporting finished products. "This efficiency advantage of onshore refining might have reduced slightly in the wake of the ongoing collapse in shipping costs, but not by too much," says Julian Hill, a consultant at Deloitte Indonesia.

As a result, we expect total nickel smelting input capacity to reach 33.9m tonnes annually by 2017 and roughly 37.5m by 2018 - accounting for roughly 95 per cent of current mining production. However, there is still room for further investment - in both nickel smelting and stainless steel production - as total annual capacity likely exceeds 60m tonnes.

We also expect nickel production to fall in the Philippines following President Rodrigo Duterte's crackdown on mining operations, which could divert further Chinese demand towards Indonesia.

Bauxite is a different animal. Indonesia's share of global bauxite supply is much smaller than for nickel, while China has a considerable domestic supply. Malaysia has also stepped up its production (see chart). 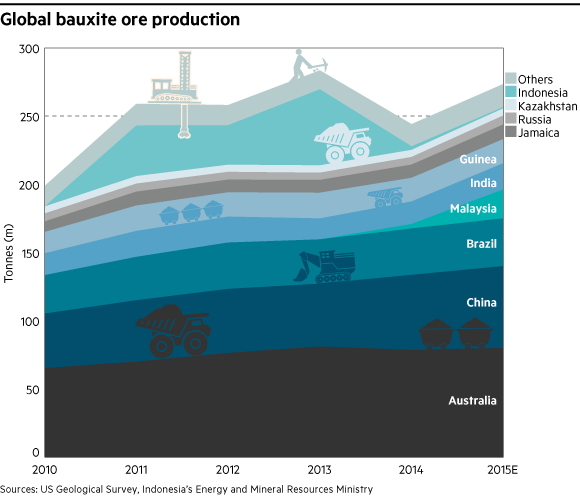 There is also a significant surplus of bauxite refining capacity in China and globally. Since 2014 only two companies have invested in Indonesian alumina processing: Indonesia Chemical Alumina and Well Harvest Winning.

Indonesian bauxite producers, such as state-owned Aneka Tambang, have been lobbying the government to relax the ban on bauxite exports, with up to 80 per cent of the country's current bauxite mining capacity lying idle as a result of current policy. Output has plummeted (see chart). 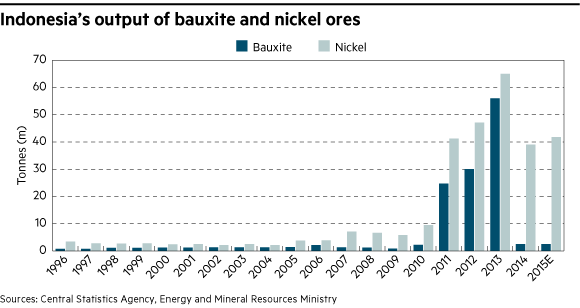 However, legal obstacles mean that policy is unlikely to change. Unlike both nickel and copper, bauxite ores already have high metal concentrations (up to 30 per cent), meaning that processing it into concentrate before alumina refining is unnecessary. Given that the mining law bans the export of "unprocessed" minerals from 2017, there is no legal wiggle room to incentivise smelter development by allowing bauxite miners to invest in processing for concentrate, a policy currently implemented in the copper sector. As a result, the government legally has no other option but to allow exports of refined products only.

Why copper is special

Copper is different again. Production of the metal is largely accounted for by two mega foreign-invested projects: Newmont in Nusa Tenggara and Freeport Indonesia in Papua. Government royalties from Freeport alone have totalled nearly $15bn over the last 20 years.

An amendment to the existing law allows producers to export raw copper ore on condition that they pay a 5 per cent export tax and show proof of plans to begin refining. Companies such as Freeport have generally complied, but have also quite deliberately delayed investment. Freeport's plans are mired in uncertainty while it tries to secure an extension of the contract for operations at its giant Grasberg mine on Papua beyond 2021.

The commercial case for copper refining - as opposed to processing - in Indonesia remains unconvincing, since processing copper ore into concentrate generates over 90 per cent of the market value of the end product, compared with less than 10 per cent for nickel and bauxite. Copper concentrate accounts for the vast majority of copper export value (see chart). Copper is also highly politicised. Indonesian president Joko Widodo has refused to negotiate an extension of Freeport's so-called contract of work, which the company wants to extend until 2041.

Freeport is, in theory, required gradually to sell down more of its majority ownership to domestic players. As a result, while it has earmarked $15bn for mine expansion and $2bn for a planned smelter, this remains on hold until there is greater policy clarity, which may not come until closer to 2019.

Yet the government's ability to force Freeport to comply is limited. An abrupt halt to Freeport's operations would result in massive layoffs in restive Papua, where the mine is the single largest private employer.

We also think the government will be forced to continue to allow copper ore exports to continue, due to the impact a total ban would have on the recent $2.6bn acquisition of an 82.2 per cent stake in Newmont by a local consortium comprising local mining magnates and Medco Energi, a company with personal ties to the ruling PDI-P party. FTCR's conversations with sources close to the Newmont deal revealed that the acquisition was allegedly agreed on the basis that it could continue exporting raw ore beyond 2017.

Jakarta would have to amend the 2009 mining law in order to allow copper concentrate exports to continue. The Indonesian Mining Association told FTCR that, given the limited time available before the tighter 2017 regulations come in, the only realistic option is to issue a ministerial regulation. We think this is likely, in spite of possible legal challenges. Failure to reach a consensus would result in the sector being left in limbo for another year or two and jeopardise the Medco acquisition.

These uncertainties could add to longer-term fiscal pressure on the government, though unlike with oil and gas the share of profits from the mining sector going into fiscal coffers has been comparatively small. That said, non-tax government revenue from the mining sector rose 27.5 per cent last year to Rp37.6tn ($2.78bn), despite a poor industry-wide environment.

*The Coordinating Economic Minister for Maritime Affairs oversees a wide range of policy portfolios, which include:

The portfolios were previously managed by different coordinating authorities. The reshuffle of portfolios was aimed at reducing the supervisory burden shouldered by the Coordinating Economic Ministry.

These article was first published on Nov. 14 by FT Confidential Research.