Workers at a garment factory in Hung Yen province, outside Hanoi   © Reuters
Economy

An FTCR survey in the first quarter of 2017 suggests job insecurity has risen in Asean, despite economic recovery in some regions. We polled 5,000 people across five Asean economies and found 22.8 per cent of respondents expressed concern about their job security over the coming six months, up 2.5 percentage points on our survey at the end of 2015 (see chart). 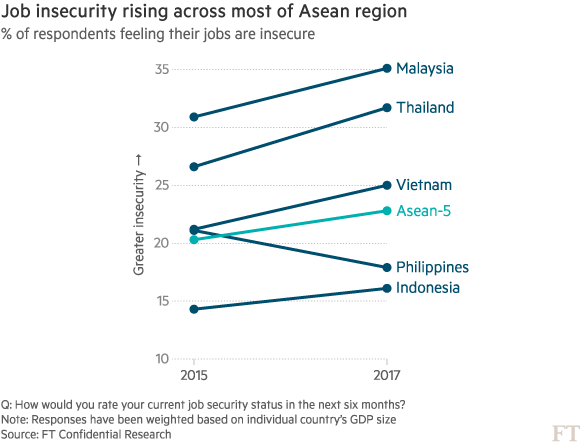 In some regional markets, the unemployment rate rose during the past two years despite a recovery in gross domestic product growth, highlighting that this has yet to translate into greater job creation.

Adidas edges out Nike in race for female Chinese shoppers

Malaysians believe it is a bad time to buy property

Indonesian car demand set to weaken to near 2014 levels

In Malaysia, for example, 35.1 per cent of respondents said they were worried about their jobs - the highest proportion among the five economies surveyed. The Malaysian unemployment rate was stuck at 3.5 per cent even though GDP growth rose to 4.5 per cent year-on-year in the fourth quarter of 2016, up from 4 per cent in the second quarter. In December 2014, when growth began to slow, the unemployment rate was just 3 per cent.

Filipinos were the exception to the region-wide pessimism: the share rating their job status in the next six months as either insecure or very insecure fell 3.2 percentage points between 2015 and 2017. Everywhere else in Asean, this figure rose between 1.8 and 5.1 percentage points.

Greater insecurity was coupled with a rise in the perceived difficulty of finding a new job. The share of Asean job seekers saying they were having difficulty rose 4.5 percentage points to 59.6 per cent (see chart). Malaysians were again the most negative: 74.5 per cent of job seekers said it was difficult to find new employment, up from 66.2 per cent at the end of 2015 and far higher than Indonesians (59.7 per cent), Thais (59.5 per cent), Vietnamese (49.6 per cent) and Filipinos (48 per cent). Malaysians' wages have grown in line with their neighbours' in the recent past. The latest data from the International Labour Organisation show that average wages in Malaysia increased 5.4 per cent in 2015 in annual terms, the same as in Vietnam and only slightly less than in the Philippines (5.5 per cent) and Indonesia (6 per cent). Thai workers, however, received a rise of just 1.8 per cent in 2015. Malaysian workers already earn the highest wages in the group of five countries, more than double the regional average (see chart).

But our survey highlights the risk that Malaysian wage growth may fall below the regional average in 2017.

This article was first published on Apr. 26 by FT Confidential Research.