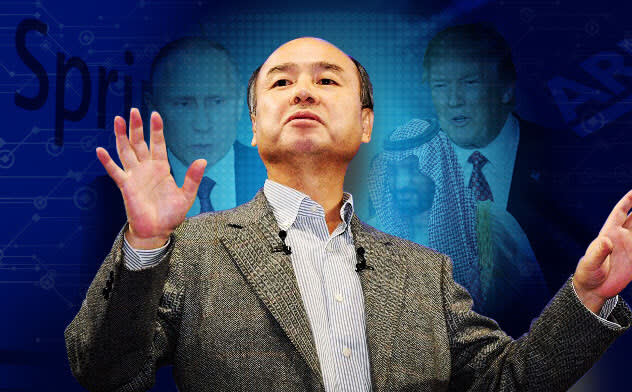 TOKYO -- Is Masayoshi Son an investor or an entrepreneur?

Behind all the headline-grabbing deals and actions -- the acquisitions of U.S. mobile carrier Sprint and U.K. chip designer ARM Holdings and an early meeting with U.S. President Donald Trump -- the chief executive of Japanese mobile carrier SoftBank Group has deep insight drawn from two unlikely sources: horse racing and salmon.

Just how serious he is about the $100 billion fund SoftBank will set up jointly with Saudi Arabia, among others, is evident in his actions. On Sept. 3 last year, Son met with Saudi Deputy Crown Prince Mohammad bin Salman at the Akasaka State Guest House in Tokyo. Son proposed the fund's idea, and together they discussed it. The prince had the attendant national news agency release a photo of him and Son having a friendly conversation.

Son was not supposed to be in Tokyo that day. He was scheduled to be in Vladivostok meeting the head of a major Russian electricity company as part of a Japanese business delegation accompanying Prime Minister Shinzo Abe, who met with his Russian counterpart Vladimir Putin. But Son canceled the trip at the last minute -- an unprecedented move. To him, meeting with the prince was more important.

About a month later on Oct. 13, Son was in Riyadh, the Saudi capital. He signed an agreement to set up the fund, shook hands with Saudi ministers and quickly headed back to the airport to fly home on his private jet. Waiting for him back in Tokyo was Tim Cook, chief executive officer of Apple.

Son narrowly avoided making another last-minute cancellation by asking Cook to reschedule a meeting. Cook, with a minute-by-minute schedule for his first stay in Japan as Apple CEO, was unprepared for such a request on short notice. But once they met, he was all in for the $100 billion project.

Why was Son in such a rush? Why does a man who has consistently called himself an entrepreneur need that investment?

The answer -- and the very reason why the public sees SoftBank as more of an investment company -- has to do with what Son calls a "herd" strategy.

When Son spots a venture he thinks is promising, he first builds a capital partnership by investing in the business. What he values is "a bond through a common will," or mutual trust between business owners. For Son, mutual trust needs a long-term capital partnership. SoftBank holds other companies' shares for 13.5 years on average. SoftBank does not opt for investing a small sum and selling the stake at a profit to make a quick buck. Nor does it use portfolios to minimize risks like ordinary investment funds do. Investment techniques such as shorting shares are certainly not an option for the company. SoftBank does not expect to make a profit from capital gains.

As a rule, Son becomes the top shareholder of the company SoftBank invests in. Although he does not intervene in the company's management, "I think [about their business] as if I'm running it," Son said. It is through this process that the "bond" emerges, he said.

Son said he likes to build a bond through investment because he wants to create "a corporate group that can last for over 300 years" -- an ambition to make the company outlive the Edo shogunate from 1603 to 1867, which was overthrown by a group of royalists including Ryoma Sakamoto, whom Son respects.

The information technology industry -- Son's main battleground -- is especially competitive, with companies rapidly rising and falling. Relying too much on one area of business can hurt a company. Son's herd strategy is the antithesis of this. The aim is to create a loose network of companies through investment in order to survive in the next era and beyond. What makes it possible is the $100 billion investment fund with Saudi Arabia.

About seven years ago, SoftBank's strategy team conducted a unique study and reported the implications of their findings to Son. Their research focused on one question: Why did the U.K. stop winning at horse racing at a certain point in time?

A thoroughbred is said to have been first defined in 1791. The U.K.'s Jockey Club approved 456 horses, and their breed was registered in the "General Stud Book." In the U.K. in the early 20th century, only horses whose ancestors are all registered in the book were recognized as thoroughbreds. Then, British horses started trailing newly emerging French and American rivals.

The fall of the British horse racing industry was due to too much emphasis on pure bloods, Son concluded. Both racehorses and businesses need new DNA to grow strong, he thought.

But finding a winner's DNA is not easy. Son often likens it to the hatching of salmon eggs. He thinks that of the 2,000 to 3,000 eggs a female salmon lays at a time, only one male and one female egg will survive. If more eggs survived, the river would overflow with salmon. If fewer, then the species would go extinct. But is it possible to find the one that survives? The answer is, even for someone like Son who has an eye for seeing people's potential, probably not.

The world is beginning to enter the age of artificial intelligence. Son believes that the so-called singularity, or the state in which AI exceeds the collective wisdom of humanity, will arrive within the next 30 years. "When that happens," Son said, "every industry will be redefined." The battlefield will expand infinitely, and finding the surviving salmon will be much more difficult.

With the new fund, Son plans to invest in up to 5,000 select businesses led by promising entrepreneurs. They will crossbreed their DNA and find the surviving salmon.

"Even without a 'herd,' SoftBank would continue for the next 30 years if you aim for success that peaks in 30 years," Son said. "But for 300 years, it won't work. When people are asked in the future to name one thing Masayoshi Son has invented, I want them to say not chips, software or hardware, but an organizational structure that can continue to grow for 300 years."

This is the thinking behind Son the investor. More than anybody, he himself understands that his aim is not well understood. "People often criticize SoftBank for being a mere investment company. But I think to myself that you will understand when the time comes -- at least within the next 300 years."

This is the first installment in a five-part series about Masayoshi Son and SoftBank.