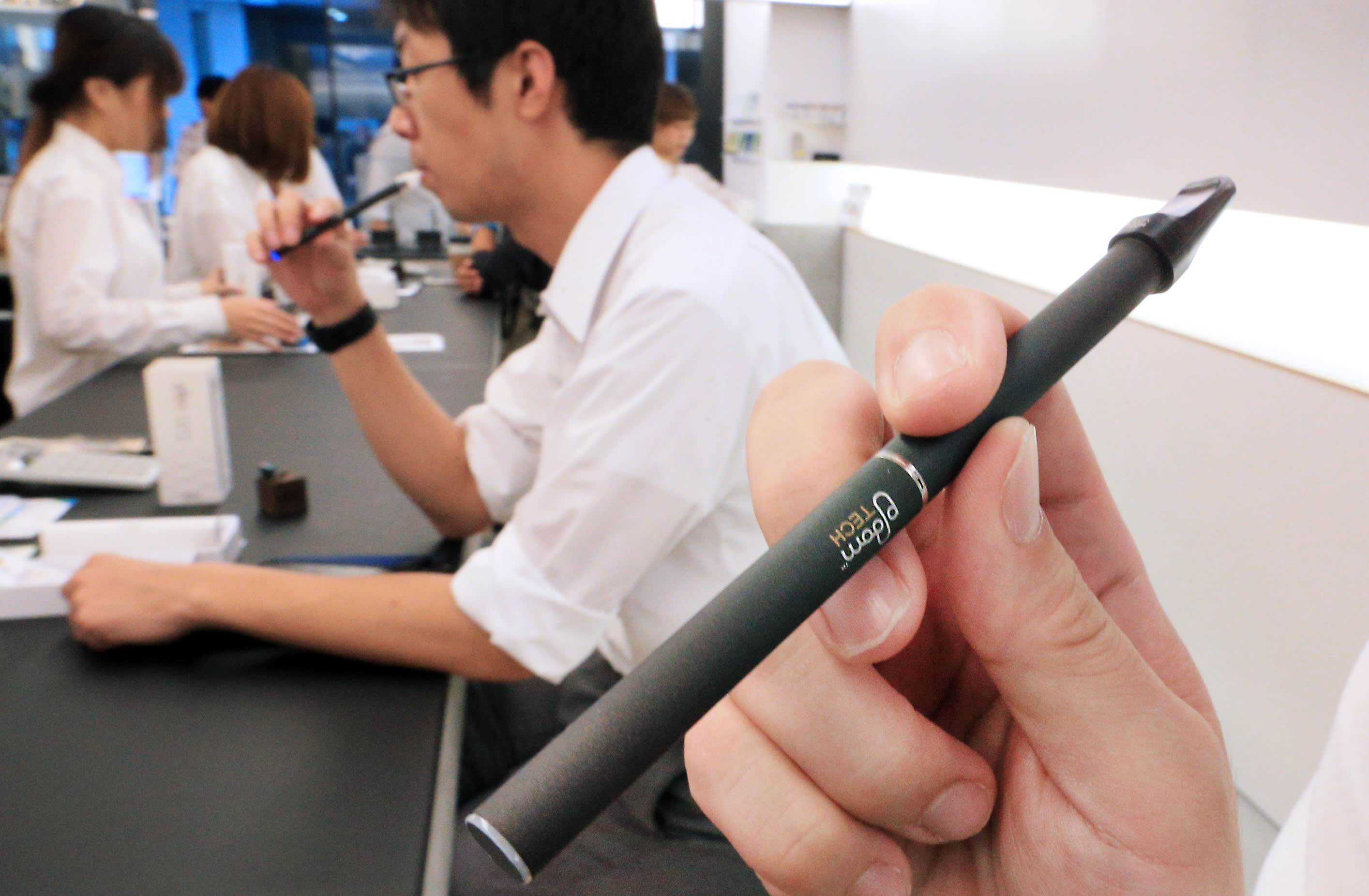 TOKYO -- Cigarette companies are betting that heated-tobacco products will become popular in Japan -- too popular, worry the country's fiscal mandarins, who want to trim their tax advantage before they catch on.

Heat-not-burn products contain tobacco leaf but produce no smoke -- a selling point in a Japanese market where smoking is on the decline amid greater awareness of the health risks. U.S. tobacco giant Philip Morris International got an early mover advantage when it introduced Japan to IQOS in the fall of 2015. British American Tobacco will launch its glo heated cigarette nationwide next month.

Japan Tobacco -- which still enjoys a domestic monopoly on cigarette production -- has started selling its Ploom Tech device at some locations, one of which is the Ploom Shop in Tokyo's upscale Ginza district. "I can smoke this at home and my wife and kids won't say anything," a 52-year-old customer said about the device. Although customers were puffing away on the sleek black sticks, the shop did not reek of cigarette smoke -- there was no smoke at all.

Japan represents a key battleground for Big Tobacco in heated products. Retail sales of heated cigarettes totaled 221.9 billion yen ($2 billion) last year and are forecast to more than quadruple to 994.1 billion yen by 2021, according to British research company Euromonitor International. That looks small compared with the domestic market for traditional cigarettes, which stood at 3.6 trillion yen in fiscal 2016. But the latter is shrinking, and more smokers appear likely to gravitate toward the newfangled alternative.

Regular cigarettes are taxed at 12.24 yen apiece, or roughly 240 yen per pack. But the tax on a pack of heated-cigarette refills ranges from just 34 yen to 192 yen depending on the number. Conventional cigarettes and heated-product refills are sold at more-or-less the same price; the amount of tax differs because the latter contain less tobacco.

If more smokers switch to the heated products, tax revenues could fall, compounding the drop from the general decline in smoking. Tobacco tax receipts have remained steady at around 2 trillion yen, but the Finance Ministry seeks to raise the tax on heated cigarettes sooner rather than later.

"Opposition to a tax hike will be stronger" once heated cigarettes have become widespread, said a source at the ministry. "It is better to raise the taxes before that happens."

As with alcohol, the various laws already on the books governing the sale and distribution of cigarettes make a tax hike relatively easy.

"This is a prime example of grabbing the low-hanging fruit. We can raise the tax at any time to secure revenue," said a senior official at the Ministry of Internal Affairs and Communications.

Tobacco taxes were raised three times between 1998 and 2014. Because those hikes were framed as a way to promote health and wellness, they were mostly better received by the public than consumption tax increases, which cover just about everything sold in Japan -- including cigarettes. The Finance Ministry also sees raising the levy on heated cigarettes as a way to further tax fairness.

Fairness is one argument espoused by Yoichi Miyazawa, the tax policy chief for the ruling Liberal Democratic Party, who surprised retailers and tobacco companies on Sept. 7 when he told the media that his committee will consider proposing changes to the tobacco tax.

"We need to find an answer by the end of the year," Miyazawa declared.

At least one maker of heated cigarettes phoned around trying to clear the air over the lawmaker's remarks. "We want accurate information. The Ministry of Finance won't provide an explanation before any decisions are made," said a person at the company.

"Just when the industry has finally opened up a new market through its own efforts," said one retailer, "now it faces the same fate as 'third beer,'" referring to no-malt beer, which once enjoyed its own tax advantage.

Japanese brewers competed on price by developing low-malt and no-malt beers to exploit gaps in the liquor tax. Consumers toasted those efforts, but the taxmen have rejiggered rates in hopes of raising tax receipts. The fear is that a similar policy move could snuff out the growth of the heated-cigarette market.

It just so happens that the Ministry of Health, Labor and Welfare and the Tokyo metropolitan government are working on ways to combat secondhand smoke. Tougher rules on traditional smoking may provide a tailwind for heated cigarettes. But higher taxes could drive smokers back to regular cigarettes. In the meantime, tobacco sales may rise as smokers stock up amid the prospect of a change in policy.