A crane and dome-shaped roof have been erected on the top floor of Fukushima Daiichi's No. 3 building, in preparation for removing rods and rubble from the spent fuel pool. (Photo by Shinya Sawai)
SHIORI GOSO, Nikkei staff writerFebruary 17, 2018 11:00 JST | Japan
CopyCopied

FUKUSHIMA, Japan -- As the Fukushima Daiichi nuclear disaster unfolded in March 2011, a hydrogen explosion ripped through the No. 3 reactor unit. Nearly seven years on, steel framing and other debris still litter the spent fuel pool, along with 566 fuel rods.

The painstaking process of removing the rods is expected to begin sometime in the fiscal year that starts in April. The fuel extraction will be a first for reactor Nos. 1-3 at the Tokyo Electric Power Co. Holdings facility, which was crippled by the earthquake and tsunami that hit northeastern Japan.

On Feb. 8, reporters from The Nikkei were allowed into the No. 3 building to get a sense of the work that awaits.

A 20-minute bus ride from the town of Tomioka took us to Fukushima Daiichi. After donning masks and protective clothing, we walked toward Unit 3. An elevator slowly lifted us to the top floor of the building, about 36 meters up. There, a crane for moving the spent rods stood ready, wrapped in plastic sheeting. We peered down into the pool but could not see the fuel, which lies under 4 to 5 meters of water. 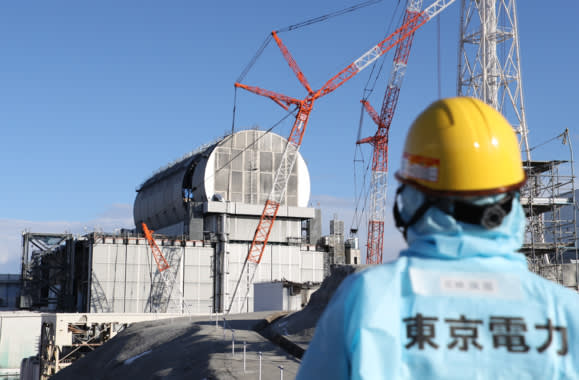 The crane outside Unit 3: The equipment for extracting the fuel will be controlled remotely. (Photo by Shinya Sawai)

Large slabs of rubble that fell into the pool have been removed, but smaller pieces remain.

Other decontamination work is proceeding gradually. Radiation on the top floor was measured as high as 2,000 millisieverts per hour in the disaster's immediate aftermath, but now it is less than 1 millisievert.

Still, caution is a must. Near the pool, our dosimeters displayed relatively high readings of up to 0.7 of a millisievert per hour. "The reading has climbed, so let's leave for now," a Tepco supervisor said. As we moved on, we frequently checked to ensure our exposure would not exceed 0.1 of a millisievert a day. 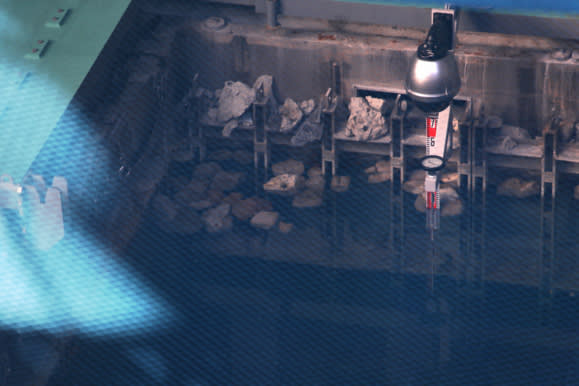 Spent fuel has been removed from reactor No. 4, which was not operating when the tsunami hit the plant. But the job will be a challenge at the meltdown-stricken Unit 3. The rods and rubble will be extracted with heavy equipment operated remotely, from a separate administrative building.

While it normally takes about two weeks to remove spent fuel, Tepco intends to proceed carefully over the course of two years.