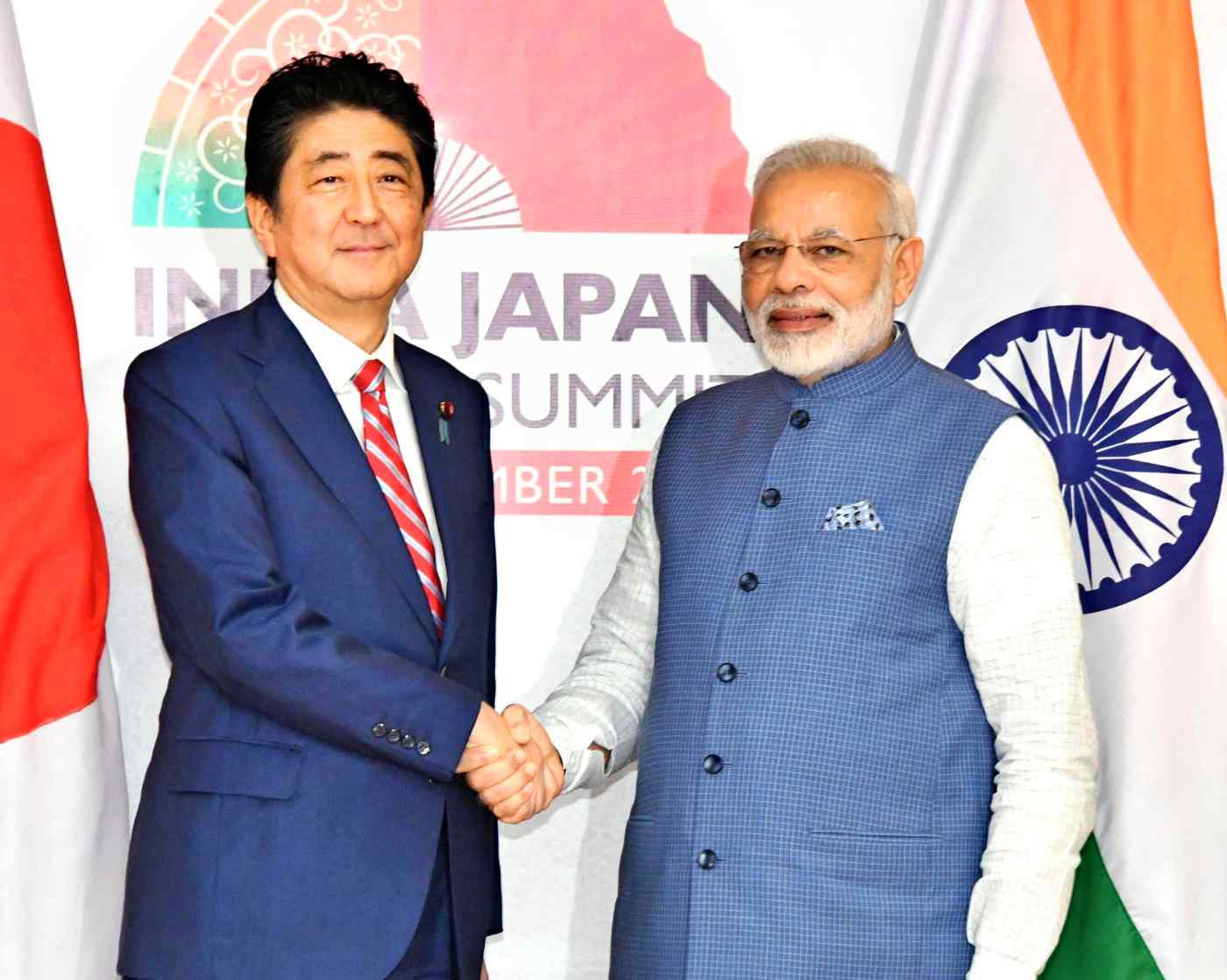 "We will further advance the cooperation between Japan, India and the U.S. based on the strong relationship of mutual trust shared with President Donald Trump," Abe said during a joint press conference with Modi.

Abe and Modi once again agreed on the necessity to maintain freedom of navigation in the face of China's expansionary maritime activities. The pair vowed to cooperate on the naval security front in a partnership that includes Washington.

"We will strengthen the collaboration with like-minded countries that share our values," said Abe.

The infrastructure deal the two sides are accelerating also has China firmly in mind. Abe and Modi agreed to set up a new India-Japan Act East Forum geared toward advancing road, electricity and other projects in India's northeast. For development of a road network, Japan provided a 38.6 billion yen ($349 million) loan.

"We will promote comprehensive support of India's northeastern states, and the two sides will further drive prosperity throughout the entire region," Abe said.

The area is near the Doklam plateau, a border territory claimed by both China and Bhutan, India's ally. The discovery in mid-June of road construction by China's People's Liberation Army at the disputed location set off a standoff between the Chinese and Indian militaries that lasted two and a half months.

The Indo-Japanese infrastructure investments also extend to the sea. The two nations are cooperating on constructing a liquefied natural gas import terminal at the Port of Colombo in Sri Lanka -- the same island country where China is working on port development.

Beijing's Belt and Road Initiative aims to create transnational infrastructure corridors to Europe by land and to Africa by sea. Japan and India intend to rebuff China's designs on securing the necessary sea lanes.

The joint statement released by the two prime ministers Thursday underscores "the importance of freedom of navigation" as well as "peace, stability and development in the Indo-Pacific region." The language marries both Abe's maritime strategy put out last year and Modi's Act East policy focused on East Asia.

"We will vigorously promote a strategic partnership that propels peace and prosperity in the Indo-Pacific region and the rest of the world," said Abe when announcing the joint statement.

But even as India is tightening its guard against China's maritime expansion, as demonstrated by participating in the joint naval exercises with Japan and the U.S. this July, India still maintains deep ties to China on land. It is still an open question whether New Delhi and Tokyo will adopt the same hard line against the Belt and Road Initiative.

"There's an undeniable concern that India will distance itself if Japan comes on too strong," said a senior official in Japan's Ministry of Foreign Affairs.